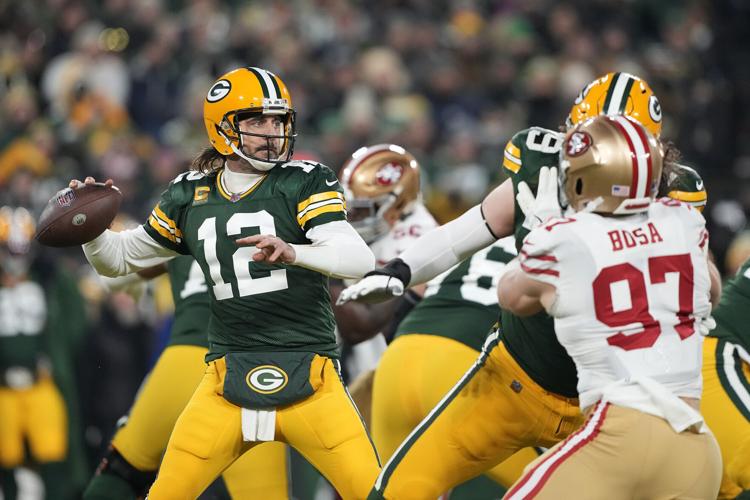 Rodgers passes during the 1st quarter of the NFC Divisional Playoff game against the San Francisco 49ers. 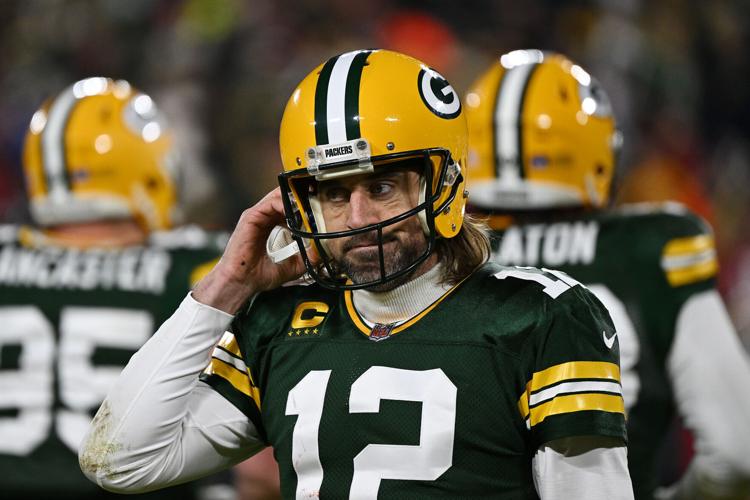 Quarterback Aaron Rodgers #12 of the Green Bay Packers reacts after failing to get a first down during the 2nd quarter of the NFC Divisional Playoff game against the San Francisco 49ers at Lambeau Field on January 22.

Rodgers passes during the 1st quarter of the NFC Divisional Playoff game against the San Francisco 49ers.

Quarterback Aaron Rodgers #12 of the Green Bay Packers reacts after failing to get a first down during the 2nd quarter of the NFC Divisional Playoff game against the San Francisco 49ers at Lambeau Field on January 22.

Green Bay Packers quarterback Aaron Rodgers has said that he takes accountability for being "divisive" as a result of his vaccination status, despite never intending to be a polarizing figure.

The reigning NFL MVP reappeared on the "The Pat McAfee Show" on Tuesday to reflect on Saturday's divisional round playoff defeat to the San Francisco 49ers, a loss that brought a premature end to the 37-year-old's season and triggered immediate speculation about his future.

Arriving as the top seed, playing on home turf and led by a quarterback tipped by many to retain his MVP status for a second straight season, it was a surprise early exit for the Packers and Rodgers.

In November, Rodgers -- having missed an NFL fixture due to Covid-19 protocols -- appeared on McAfee's show and confirmed that he was unvaccinated against Covid-19 before expressing his disappointment at the "witch hunt" treatment he had received in the media.

Now, in the wake of playoff defeat, Rodgers said there was "one reason only" that some have celebrated at his expense.

"There was a ton of people tuning in, rooting against us for one reason and one reason only -- it's because of my vaccination status," Rodgers told McAfee.

"Wanting to see us lose so they can pile on, enjoy and revel in the fact that my vaccination status was some sort of reason why we haven't had success in the playoffs."

'I've never wanted to be a divisive, polarizing figure'

Rodgers said that although the situation had been "frustrating" at times, he had empathy for the financial and mental toll of the previous two years on people -- specifically for the "fear" he believes the Covid-19 pandemic has caused.

"The biggest thing people have been dealing with is fear -- fear of health, fear of loss of money, fear of not being able to provide for your family ... and the media plays a big role in that," Rodgers said.

"Because I don't watch the news or don't subscribe to the same type of mainstream narrative at times; and have decided to take my own personal health and responsibility for my health in my hands; and did my research and looked into things; and also my association with other people who have done similar things, there's anger thrown my way but the root of that I think is fear."

Rodgers said he had been "insulated" and had not seen any alleged hatred directed towards him but took accountability for being unintentionally "divisive" during the season.

"I realize that I've been divisive this season by my vaccination status and by my willingness to talk about it -- to talk about the research that I've done and my own opinions -- I take accountability for that," Rodgers said.

"I've never wanted to be a divisive, polarizing figure on this. I've wanted to encourage people and inspire people to think for themselves, to take their health in their own hands ... hopefully, I've inspired people."

Rodgers also discussed his future plans at length, following in the footsteps of another veteran quarterback currently weighing up his options after a playoff defeat -- Tom Brady.

After Brady's Tampa Bay Buccaneers fell narrowly short of a stunning comeback against the Los Angeles Rams on Sunday, this year be the first time since 2009 that neither Rodgers or Brady will feature in a conference championship game, according ESPN Stats and Info.

Rodgers has been synonymous with Lambeau Field across an 18-year career in Wisconsin, leading the Packers to his sole Super Bowl triumph in 2011, but he admitted he needed to "get away" and ask himself some key questions before committing to another season with the team.

"Can you still play? Do you still have the same commitment and enjoyment with the game and do you wanna sign up for the grind again?" Rodgers said.

"The only way of knowing that is to get away from it for a little bit, let your mind clear and think about the enormity of the task and what would bring you the most enjoyment -- what's the best for your quality of life at that point."

Like Brady, Rodgers said he would be consulting any decision on his career with loved ones, given the "enormity" of the choice.

The quarterback said that all options were on the table except free agency, and also ruled out the possibility of retiring and then returning to the sport a year later, saying such a move made "no sense."

However, given the impact of his decision on the futures of Packers players and staff, Rodgers said he would likely make a decision before free agency begins on March 16th, as failing to do so would be "disrespectful" to the organization.

Despite the uncertainty of his future, Rodgers insisted he had no fear over the subject of retirement.

"The uncertainty is not unsettling at all, it's almost exciting, thinking about what life is gonna look like moving forward.

"It's an interesting time because you're dealing with the grieving process of the season and knowing that that specific team of people won't be the same -- there's always changes."

How John Madden became the biggest name in video games