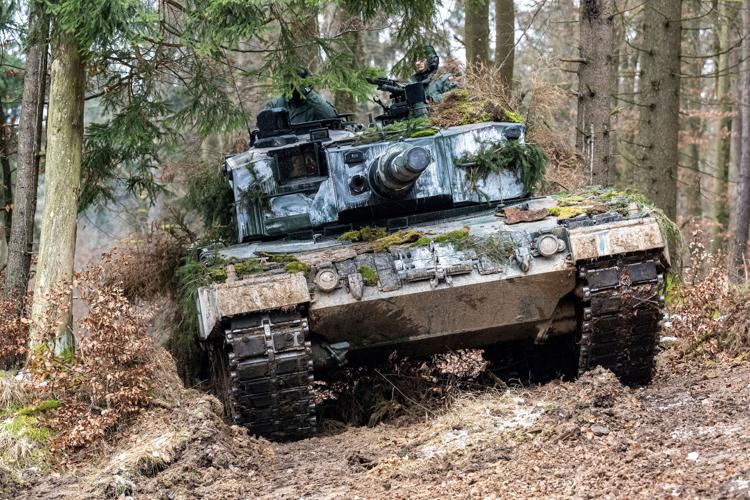 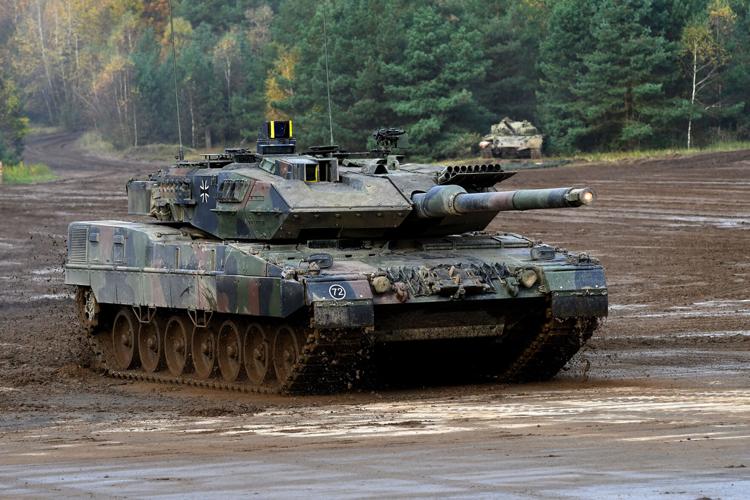 A Leopard 2 A7 main battle tank of the German armed forces Bundeswehr drives through the mud in the context of an informative educational practice "Land Operation Exercise 2017" at the military training area in Munster, northern Germany, on October 13, 2017. 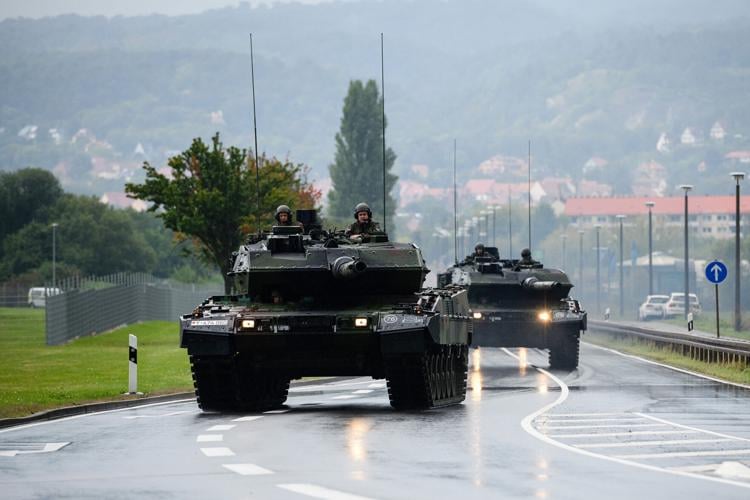 The high-tech vehicles will allow Ukrainian forces to take on Russian troops head-on.

A Leopard 2 A7 main battle tank of the German armed forces Bundeswehr drives through the mud in the context of an informative educational practice "Land Operation Exercise 2017" at the military training area in Munster, northern Germany, on October 13, 2017.

The high-tech vehicles will allow Ukrainian forces to take on Russian troops head-on.

After weeks of geopolitical squabbling, a major moment in the war in Ukraine has arrived: Germany has announced it will provide Leopard 2 tanks to Kyiv's troops.

German Chancellor Olaf Scholz announced the move on Wednesday, bowing to intensifying international pressure -- led by the United States, Poland and a bloc of other European nations, which called on Berlin to step up its military support and commit to sending their sought-after vehicles.

The announcement is likely to be matched by the US; Washington signaled it was finalizing plans to send approximately 30 Abrams tanks to Ukraine, according to two US officials familiar with the deliberations.

And the influx of Western tanks into the conflict has the potential to change the shape of the war. The shipments are a breakthrough in the West's military support for Kyiv, signalling a bullish view around the world about Ukraine's ability to reclaim occupied territory.

Crucially, they may allow Ukraine to take the fighting to Moscow's forces and re-capture more occupied land, rather than focusing primarily on beating back Russian attacks.

Here's what you need to know about Wednesday's developments and how they affect the war.

What has been announced?

Scholz said in the German parliament on Wednesday that his government will send 14 Leopard tanks to Ukraine, wrapping up months of deliberation and several days of tense negotiations with NATO partners.

"This is the result of intensive consultations that took place with Germany's closest European and international partners," a government statement said.

The German army has 320 Leopard 2 tanks in its possession but does not reveal how many would be battle ready, a spokeswoman for the Ministry of Defense previously told CNN.

Ukrainian President Volodymyr Zelensky's chief of staff welcomed the news that Germany will send his country Leopard 2 combat tanks and reiterated they needed "a lot" of them.

"The first tank step has been taken. Next up is the 'tank coalition'. We need a lot of Leopards," Andriy Yermak said on Telegram.

When will Ukraine be able to use them?

The goal is to "quickly assemble" two battalions with Leopard 2 tanks, the German government's statement said. "The training of the Ukrainian crews is to begin quickly in Germany. In addition to training, the package will also include logistics, ammunition and maintenance of the systems."

German Defense Minister Boris Pistorius said the Leopard tanks could be operational in Ukraine in about three months.

The plan for incorporating Abrams tanks will likely be more complicated; not only do they need to cross the Atlantic Ocean first, but their systems are considered more complex.

"The Abrams tank is a very complicated piece of equipment. It's expensive. It's hard to train on. It has a jet engine," Colin Kahl, the Pentagon's under secretary of defense for policy, told Reuters last week. "I just don't think we're there yet," Kahl said at the time on giving the tanks to Ukraine, a sign of how quickly the US position has evolved during the past days of negotiations.

The ability to get Ukrainians into Leopards quickly was always seen as an advantage of sending that type of tank, over the more cumbersome Abrams.

Abrams are also "considerably heavier" than most iterations of the Leopard, "so you need to give Ukraine additional engineering and recovery equipment," Gustav C. Gressel, a senior policy fellow at the European Council on Foreign Relations (ECFR), told CNN.

Why are Leopard 2 tanks needed?

Wednesday's announcement means Ukraine will soon be in possession of a modern tank that would hugely boost their arsenal ahead of renewed ground fighting anticipated in the spring.

Ukraine is bracing for a Russian offensive in the coming weeks, aimed at completing the capture of the Luhansk and Donetsk regions -- the primary goal set by President Vladimir Putin for what he euphemistically calls his "special military operation."

The Ukrainian military's most senior officer, Gen. Valerii Zaluzhniy, said in December that Ukraine expected a Russian offensive any time between the end of January and March.

Previous military aid, like the American HIMARS rocket system, has been vital in helping Ukraine disrupt Russian advances and make a series of successful counter-offensives in recent months.

Kyiv will hope that Western tanks will have a similar impact on the slow, grinding ground war in Ukraine's east.

Tanks represent the most powerful direct offensive weapon provided to Ukraine so far, a heavily armed and armored system designed to meet the enemy head on instead of firing from a distance. If used properly with the necessary training, they could allow Ukraine to retake territory against Russian forces that have had time to dig defensive lines.

The US has begun supplying refurbished Soviet-era T-72 tanks, but modern western tanks are a generation ahead in terms of their ability to target enemy positions. Ukrainian officials say they need several hundred main battle tanks -- not only to defend their present positions but also to take the fight to the enemy in the coming months.

"Of course, we need a large number of Western tanks. They are much better than the Soviet models and can help us advance," Lt. Gen. Serhiy Naiev told CNN.

How many tanks will be sent?

Germany said it will send 14 tanks to Ukraine "as a first step," and aims to get them into the hands of troops quickly.

Crucially, Berlin's announcement will likely also encourage other European nations who own Leopards to re-export some of their vehicles. Typically this would require Germany's approval, and some countries had shown hesitance in sending tanks unless a coalition of nations doing the same could be formed.

"I call on all new partners that have Leopard 2 tanks in service to join the coalition and provide as many of them as possible," Ukraine's Foreign Minister Dmytro Kuleba said. "They are free now."

Several armies use Leopards. In total, there are around 2,000 Leopard 2 vehicles spread across Europe, at different levels of readiness.

And many of those had already expressed their desire to ship some of theirs to Ukraine, with Poland attempting to rally support on the continent in case Germany declined to send theirs.

"Germany will give the partner countries that want to quickly deliver Leopard 2 tanks from their stocks to Ukraine the corresponding authorizations to transfer them," Scholz's government said Wednesday.

Leopards are not the only modern tanks on their way to Ukraine. Germany's decision on Wednesday sees it join a growing movement among NATO powers to equip Kyiv with vehicles.

Plans being finalized in the US will see around 30 Abrams tanks sent across the Atlantic. Earlier this year, the UK committed 12 Challenger 2 tanks.

What took Germany so long?

Germany's decision followed weeks of Western pressure, ending a period of deliberation in Berlin that has frustrated its allies and caused exasperation in Kyiv.

German officials wrapped a NATO summit last Friday with no agreement to send tanks. Instead, officials lobbied for a similar commitment from the US before it would be drawn. Berlin subsequently said it wouldn't stand in the way of other countries re-exporting their Leopards, but was tight-lipped on its own stance.

Sending tanks into Ukraine was once a red line for Western leaders, who had been generally willing to provide Kyiv with defensive weapons to repel the Russian threat but had shown reluctance to introduce systems which could put Ukrainian forces on the front foot.

The concern early in the war in some corners of NATO was that overstepping in military support would run the risk of escalating the conflict, and possibly even introduce the threat of nuclear attacks.

Nearly one year into the war, however, that calculus has changed -- in no small part thanks to Ukraine's successful counter-offensives toward the end of 2022, and its ability to incorporate new and complex Western weapons systems into its units.

Germany was slower than some of its allies in forcing this change in approach, with new defense minister Pistorius repeatedly calling for more time this week in the face of global pressure, and insisting that sending tanks would come with pros and cons for Berlin.

But Piotr Muller, the spokesman of the Polish government, said Wednesday that "undoubtedly, this diplomatic pressure is changing the German approach, and not only in the case of these tanks."

How has Russia responded?

Russia reacted angrily to the initial reports that Germany and the US would send tanks to Ukraine, in much the same way it responded to the UK's earlier decision to send tanks.

Kremlin officials have also sought to cast the sending of tanks as an act of aggression against Russia, fueling their bogus narrative that their so-called military operation is required to defend Russian interests rather than to capture Ukraine.

Russian ambassador to Germany Sergei Nechaev said in a statement Wednesday that Berlin's decision was "extremely dangerous" and takes the conflict "to a new level of confrontation."

US and European donations of tanks to the Ukrainian war effort will bring "more suffering" to the country and "bring more tension to the continent," Kremlin spokesperson Dmitry Peskov told CNN Wednesday.

If US-made Abrams tanks are delivered to Ukraine, they will "burn down just like all the others," and their cost will be a burden for European taxpayers, Peskov said.

But NATO allies supported Germany's move and have repeatedly resisted Russia's pretext for its war.

"The right decision by NATO Allies and friends to send main battle tanks to Ukraine. Alongside Challenger 2s, they will strengthen Ukraine's defensive firepower," British Prime Minster Rishi Sunak wrote on Twitter on Wednesday. "Together, we are accelerating our efforts to ensure Ukraine wins this war and secures a lasting peace."

You asked, we answered: NASA's new telescope and the search for clues about our universe explained