LAMAR COUNTY, Ala. (WTVA) - 22-year-old Sierra Smith said she was in the car when Devin Cribbs, the father of her 8-year-old daughter, was fatally shot.

According to Smith, Cribbs was driving the car taking two of their friends home on the morning of January 13, when they passed two Vernon police vehicles - one on County Road 9, and another on Convalescent Road.

Smith said that the second car turned on its blue lights and started pursuing them.

After Cribbs stopped at the intersection of Zion-Shiloh Road and County Road 10, the Vernon police officer allegedly rammed the back of car Cribbs was driving, before getting out and approaching the driver's side door.

Smith says the officer then began ordering the four passengers to get out of the vehicle and get on the ground.

From Sierra Smith's account, it's unclear what allegedly happened in between those demands and the shots that killed Devin Cribbs, but she did say that Cribbs and the officer exchanged words.

According to her account, Cribbs allegedly opened the driver's side door and didn't even make it out of the car before being shot by the officer.

She goes on to say that she could see Cribbs' body on the ground, "losing color," while the officer told her she could not check on him.

"We were asking, 'Can we go look at him?' or whatever and he was telling us we had to stay away from the car and stay on the ground," Smith said. "And he started panicking saying he didn't know who Devin was."

The Alabama Law Enforcement Agency has already confirmed that a vehicle chase did happen, but a reason for that chase has not been given.

Other members of the family say they are still looking for answers.

Priscilla Duke, Devin's mother, said she has been trying to obtain the body-camera footage of the shooting from the Vernon police department, but that she's been told she'll need to get a lawyer to do so.

She also said that she has heard little-to-nothing from the police department about the shooting. 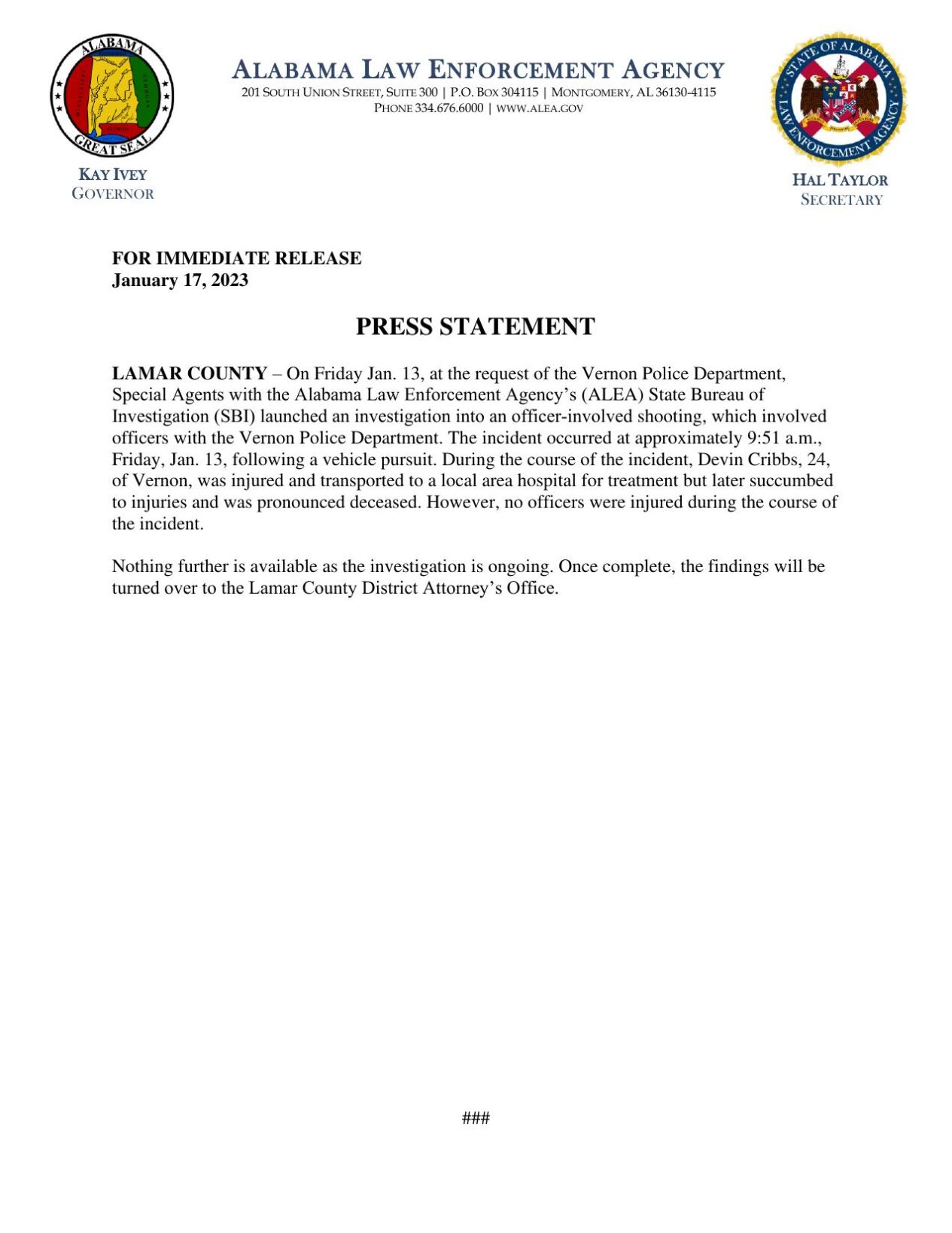 The Alabama Law Enforcement Agency referred WTVA to the Vernon Police Department, who then referred the station to the local District Attorney's office for more details.

To view or download the ALEA's press release on the fatal shooting in a new tab, click here.

This is an ongoing story that will be updated as new information emerges.