Talks break down between USWNT and US Soccer over equal pay 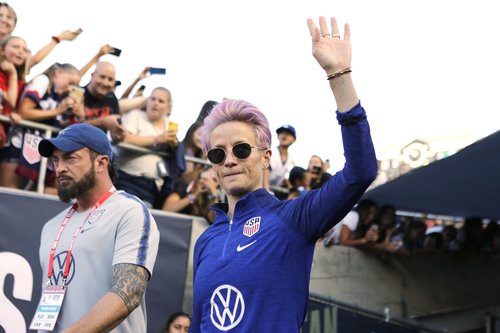 Mediation talks between US Soccer and the...

Mediation talks between US Soccer and the United States women's soccer team over a gender discrimination lawsuit filed by the players earlier this year have broken down, according to a spokesperson for the players.

Both parties had agreed to meet in New York this week but statements issued Wednesday indicate that they are far apart and, with no further talks scheduled, the case could result in a showdown in federal court.

"We entered this week's mediation with representatives of USSF full of hope," the players' spokesperson Molly Levinson said in a statement to CNN Sport. "Today we must conclude these meetings sorely disappointed in the federation's determination to perpetuate fundamentally discriminatory workplace conditions and behavior."

"It is clear that USSF, including its board of directors and president Carlos Cordeiro, fully intend to continue to compensate women players less than men. They will not succeed," Levinson said.

"We want all of our fans, sponsors, peers around the world, and women everywhere to know we are undaunted and will eagerly look forward to a jury trial."

READ: USWNT to be admired for its fight for lasting change

US Soccer: We want to 'continue discussions in good faith'

US Soccer, the sport's governing body in the US, described Levinson's statement as "inflammatory."

"We have said numerous times that our goal is to find a resolution, and during mediation we had hoped we would be able to address the issues in a respectful manner and reach an agreement," the federation wrote in a statement to CNN Sport.

"Unfortunately, instead of allowing mediation to proceed in a considerate manner, plaintiffs' counsel took an aggressive and ultimately unproductive approach that follows months of presenting misleading information to the public in an effort to perpetuate confusion," US Soccer said.

"Despite inflammatory statements from their spokesperson, which are intended to paint our actions inaccurately and unfairly, we are undaunted in our efforts to continue discussions in good faith."

The women's team's March lawsuit was filed in US District Court in California with 28 members of the team listed as plaintiffs.

The suit alleges US Soccer's payment practices amount to federal discrimination by paying women less than men "for substantially equal work and by denying them at least equal playing, training, and travel conditions; equal promotion of their games; equal support and development for their games; and other terms and conditions of employment equal to the MNT."

In one hypothetical case cited in the lawsuit, if the women's and men's teams both won 20 straight games in a season, the women would make 38% what the men do.

Last month US Soccer said the reigning Women's World Cup champions earned more than the US Men's National Team, with Cordeiro releasing an open letter on Twitter saying that from 2010 through 2018 the federation paid $34.1 million in salary and game bonuses to the women, compared to $26.4 million for the men.

Those figures did not include benefits, such as healthcare, that the women receive. Included in the federation's numbers is that US Soccer pays USWNT contracted players a salary to play in the National Women's Soccer League, while the men are paid by their individual teams.

The women's and men's compensation structures are different, as those each were collectively bargained.

In a written statement in July, Levinson said the figures were misleading and "utterly false."

America's women have been far more successful than their male counterparts, winning four World Cups -- the most recent being in France last month -- and four Olympic gold medals.

The USMNT said they too "were not impressed" by Cordeiro's letter. "The women's national team players deserve equal pay and are right to pursue a legal remedy from the courts or Congress," the men's team said.

Sponsors have also been adding to the pressure to resolve the equal pay fight with deodorant brand Secret saying in July that it planned to contribute $529,000 to the USWNT players' association.

Nike, US Soccer's biggest partner, has also said it's a strong advocate for pay equity. "Regarding gender equality, Nike has been an advocate for women and girls in the US and around the world," a spokesperson said.

Minutes after the USWNT's World Cup win on July 7, Nike ran a 60-second ad celebrating the team's victory, centering on the concept that the USWNT's win is about more than just winning a soccer title. However, Nike itself has been criticized for reducing athletes' pay during their pregnancies -- a practice it said in May it would discontinue.

Earlier this month it emerged that US Soccer had enlisted two lobbying firms, FBB Federal Relations and Vann Ness Feldman, to push back against claims of pay disparity after two Democratic senators introduced legislation that would require equal pay for men and women's national teams.

Levinson told CNN the move had left the team "stunned and disappointed."