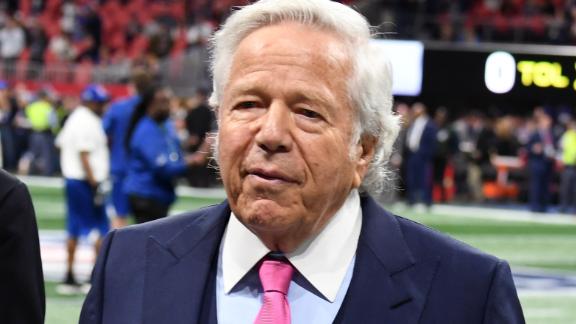 New England Patriots owner Robert Kraft is being charged with two counts of soliciting someone to commit prostitution, stemming from a raid in a day spa in Florida.

(CNN) -- New England Patriots owner Robert Kraft is being charged with two counts of soliciting someone to commit prostitution, stemming from a raid in a day spa in Florida, police said Friday.

Kraft, 77, was linked to a sting that has been going on for months, and his charges relate specifically to "two different visits" to the Orchids of Asia Day Spa in the city of Jupiter, police Chief Daniel Kerr said at a news conference.

"Charges have been filed, but he has not been arrested," Jupiter police spokeswoman Kristin Rightler said.

A spokesperson for Kraft denied that he had committed a crime.

"We categorically deny that Mr. Kraft engaged in any illegal activity. Because it is a judicial matter, we will not be commenting further," the spokesperson said.

Kraft is one of more than 20 people being charged with soliciting to commit prostitution, Kerr said.

That evidence includes video of Kraft in a room at the spa receiving "paid acts," and of him being driven to the spa, Kerr said.

All of the individuals police have listed and charged have all been caught on video, authorities said.

Officers involved in the sting had been wearing body cameras, and also were involved in ongoing surveillance at the business, Kerr said.

Kraft took ownership of the Patriots in January 1994. Since then, the NFL team has played in 10 Super Bowls, winning six of them, including this past season.

With his wife, Myra, he also oversaw the Robert and Myra Kraft Family Foundation and the New England Patriots Charitable Foundation. Myra Kraft passed away in 2011 at the age of 68 after a battle with cancer.

"He's proclaimed his innocence totally, but I'm very surprised to see it," he said.

What the charges mean for Kraft

Mike Edmondson, a spokesman with the State Attorney's Office in Palm Beach County, said the charges are second-degree misdemeanors and generally carry no more than a 60-day sentence in county jail.

"They also have an interesting provision in Florida law that you have to complete 100 hours of community service and attend a prostitution and human trafficking awareness course," Callan said.

Callan said that it's unusual for the "johns" to get arrested.

Shared Hope International, a group working to stop sex trafficking, identifies "johns" as individuals who pay for "or trade something of value for sexual acts."

"Usually the prostitute gets arrested or the person who's running the brothel," Callan said. "So this is an unusual approach, to round up the 'johns.' You see it happening periodically in jurisdictions where there's a major prostitution problem and he just got caught in the net."

What NFL has said so far

"The NFL is aware of the ongoing law enforcement matter and will continue to monitor developments," the league said later Friday.

According to the policy, "Everyone who is part of the league must refrain from 'conduct detrimental to the integrity of and public confidence in' the NFL. This includes owners, coaches, players, other team employees, game officials, and employees of the league office, NFL Films, NFL Network, or any other NFL business."

It also states that owners are held to a "higher standard."

"Ownership and club or league management have traditionally been held to a higher standard and will be subject to more significant discipline when violations of the Personal Conduct Policy occur."

Two landslides, one dam still at risk of failure in Oktibbeha County

Sophia - Staying just above freezing today with a lot of sunshine

Two landslides, one dam still at risk of failure in Oktibbeha County