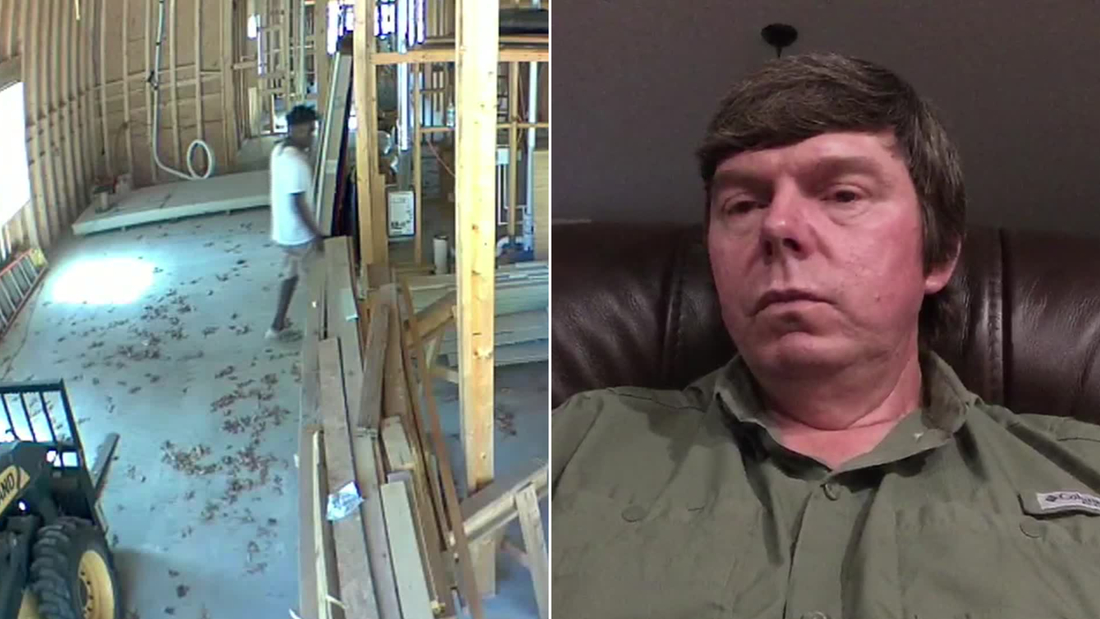 Larry English, the man who owns the home under construction that Ahmaud Arbery is believed to have entered before he was shot and killed, says he does not believe Arbery stole anything that day.

Lawyers for two men charged with killing Ahmaud Arbery in south Georgia asserted Thursday that the public has rushed to judgment, and that the full story has yet to be revealed.

Travis McMichael, 34, and his father, Gregory McMichael, 64, are charged with felony murder and aggravated assault in the February 23 death of Arbery, a black man who was shot dead while jogging just outside Brunswick.

But Robert Rubin and Jason Sheffield, attorneys for the younger McMichael, 'conducted an extensive initial investigation and believe there is compelling evidence that Mr. McMichael is not guilty of the charges against him,' a statement from their law firm reads.

'Travis has been vilified before his voice could even be heard. ... The truth in this case will exonerate Travis,' the statement reads.

At a news conference at the firm's office in the Atlanta suburb of Decatur, Rubin said Arbery's death was a tragedy, though that doesn't mean that a crime was committed.

'Our hearts go out to the Arbery family, because, although, we don't stand in their shoes, we understand their pain,' he said.

Gregory McMichael's attorneys said the public has not heard the whole story, and 'more of the truth will come out.'

'So often the public accepts a narrative driven by an incomplete set of facts, one that vilifies a good person, based on a rush to judgement, which has happened in this case,' Laura Hogue, one of the attorneys for the elder McMichael, said in her law firm's statement.

'While the death of Ahmaud Arbery is a tragedy, causing deep grief to his family -- a tragedy that at first appears to many to fit into a terrible pattern in American life -- this case does not fit that pattern,' attorney Frank Hogue said. 'The full story, to be revealed in in time, will tell the truth about this case.'

The Hogues will hold a news conference Friday.

The father and son were arrested May 7 in connection with Arbery's killing, days after a cell phone video of the confrontation emerged. Gregory McMichael told police, according to the incident report, that Arbery attacked his son and was shot as they fought over the shotgun.

Attorneys for Arbery's family said Travis McMichael's lawyers were correct in saying no one should rush to judgment.

'The men who ambushed Ahmaud Arbery rushed to judgment on February 23,' the statement from S. Lee Merritt, Benjamin Crump and L. Chris Stewart reads. They also say Travis McMichael should be presumed innocent in the legal system.

'We only wish that (he) had provided that same presumption of innocence to Ahmaud Arbery before chasing and killing him,' the statement reads.

The McMichaels are being held in jail; a judge said last week that bail will be set later. Sheffield said he intends to ask a judge to release Travis McMichael on bail.

Gregory McMichael's defense team said they will ask for bail and they think 'more of the truth will come out' at a preliminary hearing.

Neither hearing has been scheduled.

Arbery was jogging in the Satilla Shores neighborhood outside Brunswick on February 23 when he was fatally shot.

The elder McMichael said he thought Arbery looked like a suspect in a series of recent break-ins, according to the police incident report.

Gregory McMichael grabbed a handgun, his son took a shotgun and they pursued Arbery in a truck, the father told police, according to the report.

On two occasions, Arbery avoided them. When they caught up to him a third time, Travis McMichael exited the truck with a shotgun and a struggle ensued between him and Arbery.

Arbery was shot three times, including twice in the chest, according to an autopsy report obtained by CNN.

A driver who pulled up behind the McMichael's truck recorded video of the shooting. The graphic video surfaced earlier this month on a radio station website and was reposted on social media. It ignited national coverage of the killing and spurred protests in the area.

Criticism quickly grew over the handling of the case, which went through three district attorneys -- two of whom recused themselves -- before the Georgia Bureau of Investigation was brought in.

Many who saw the video online wondered why Gregory McMichael, a former police office and investigator for the local DA's office, and his son were not already in jail. Arbery's father, Marcus Abery Sr., and Atlanta Mayor Keisha Lance Bottoms called the incident a lynching.

Surveillance video from a house under construction appears to show Arbery at the site minutes before he was killed. In that video, a man can be seen walking around and not touching anything.

The property owner, Larry English, said he did not report a crime after that episode, and he only saw the footage after Arbery's death, English's attorney, Elizabeth Graddy, has said.

'I don't want it to be put out and misused and misinterpreted for people to think that I had accused Mr. Arbery of stealing or robbery, because I never did,' English told CNN's Chris Cuomo this week.

After the shooting, Gregory McMichael told police there had been 'several break-ins' in the area, and that Arbery looked like a suspect caught on surveillance video.

A man who identified himself as Travis McMichael had called 911 on February 11 and told the operator he saw a man go into the house under construction.

Motion-sensor security cameras recorded surveillance video showing a trespassing on English's property on February 11, Graddy said. English told CNN he could not identify the person he says he saw on the video after the February 11 incident. He did not report the incident to the police, he said.

English lives several hours away from the house being built.

A few lingering showers and isolated thunderstorms for our Friday

Pet of the Week - Clyde

Pontotoc farm allowing customers to pick their own berries