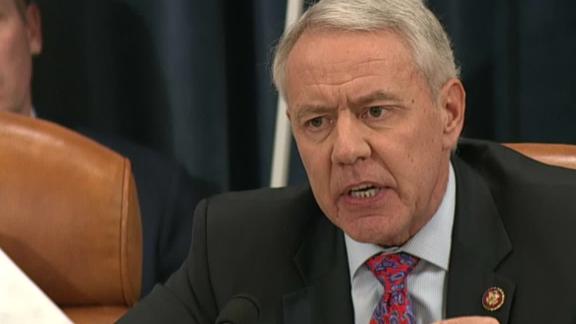 Rep. Ken Buck (R-CO) says that if the Democrats decide to impeach President Donald Trump that they might as well say goodbye to their majority status in the House of Representatives.

House Judiciary Chairman Jerry Nadler late on Thursday night abruptly paused his committee's debate on articles of impeachment before final votes until Friday morning, prompting howls of protest from Republicans after a marathon session that had stretched more than 14 hours.

Republicans erupted in anger at the move, accusing the New York Democrat of wanting to put the vote on television and going back on an agreement for the committee to stop considering amendments.

Rep. Doug Collins of Georgia, the top Republican on the Judiciary Committee, called the move the 'the most bush league stunt I've ever seen in my entire life.'

'Words cannot describe how inappropriate this was,' Collins said.

But Democrats blamed Republicans for the schedule switch. They were furious at Republicans for what they believed was a blatant effort to drag out Thursday's proceedings and delay final votes until the middle of the night. Earlier Thursday, it was widely believed that Republicans would be through offering amendments by around 5 p.m. EST.

As the evening wore on, Democrats came to believe the GOP was simply trying to bury the votes in the news cycle. So the decision was made to hold the final two votes Friday morning to ensure more people would be able to witness the historic move -- even though it enraged the GOP.

'They can't expect to go ... into the middle of the night without the American public seeing,' said Rep. Debbie Mucarsel-Powell, a Florida Democrat who is a member of the committee.

Rep. Jamie Raskin of Maryland added that they wanted to hold the vote in 'broad daylight.'

Nadler declined to comment to CNN on his way out of the hearing room.

Before the pause in the hearing, the committee had debated the two articles of impeachment against the President -- abuse of power and obstruction of Congress -- for hours on end, with lawmakers clashing over the allegations against Trump and the repercussions of voting to impeach him.

The committee's action will set the stage for a vote on the floor of the House of Representatives next week, which would make Trump the third President in US history to be impeached.

Inside the hearing room Thursday, Democrats and Republicans vigorously debated the facts of the Ukraine case, the veracity of the language in the nine-page impeachment resolution and the repercussions that Trump's impeachment would have for both the Constitution and the institution of Congress.

The markup lasted late into the night Thursday, stretching longer than 14 hours as Republicans used the one tool available to them in the markup: the ability to extend it with additional amendments and debate. As Republicans prepared even more amendments, the committee took a break just after 9 p.m. EST, and lawmakers braced for the debate to last late into the night. When they returned just before 10 p.m. EST, however, tensions had seemed to cool and the committee held its final debate -- before Republicans erupted as Nadler ended the meeting for the night.

Thursday's hearing was the latest and clearest sign yet that Democrats will impeach Trump next week, a reality that both ends of Pennsylvania Avenue are preparing for as the impeachment case will shift from the Democratic-controlled House to the Republican-held Senate gearing up for a trial in January.

Democrats charge that Trump must be impeached for abusing his office by pressuring Ukraine to investigate his political rivals while withholding US security aid and a White House meeting, and then covering up his conduct by stonewalling the congressional investigation.

Republicans counter that Democrats are pushing forward with a political impeachment that contains no crime nor evidence of wrongdoing.

'They can't make a crime,' said Georgia Rep. Doug Collins, the top Republican on the House Judiciary Committee. 'They hold back to the fact that we can impeach him for anything, and that's what they've done.'

That debate -- and the intense fighting between the two sides over it -- played out amid Thursday's messy, legislative sausage-making in which Democrats beat back Republican amendments to weaken or kill the impeachment resolution.

Lawmakers sparred at length over amendments to remove entire articles of impeachment, to replace former Vice President Joe Biden's name in the resolution with that of his son Hunter Biden and Burisma, and to state that Ukraine did receive aid money from the United States.

The committee process for debating and approving the articles is used for hundreds of pieces of legislation on Capitol Hill each year, but Thursday's debate was as contentious as ever. All of the amendments proposed so far Thursday have been defeated along party lines.

Democratic leadership sources say that for the full floor vote they could lose more than the two moderate Democrats who opposed an earlier procedural vote on the impeachment inquiry, but there's no concern about major defections that could endanger the articles.

Pelosi said Thursday that she is not lobbying moderates on the fence to vote for impeachment.

'People have to come to their own conclusions,' the California Democrat said.

'We are having a lot of good conversations with Senate Republicans,' Ueland said after the meeting. 'We will continue to do that here over the next few days and weeks as we work through all these issues and priorities the President has outlined when it comes to where we should go on these articles, which starts with defeating them in the House because they are not based on the facts.'

House Republican leaders, meanwhile, are lobbying their members on the House floor to oppose impeachment, as Republicans work to keep the number of GOP defections on impeachment at zero.

Thursday's debate was free-wheeling, as any committee member was able to offer an amendment to the impeachment articles and every lawmaker could speak up to debate it.

Republicans proposed two amendments to simply remove the first and second impeachment articles from the resolution. Both were defeated in party-line votes.

Democrats responded that Republicans were ignoring the President's misconduct, continuing the partisan debate over impeachment that began on Wednesday night when every lawmaker on the 41-member committee delivered an opening statement.

Republican Rep. Matt Gaetz of Florida offered the amendment to replace Joe Biden's name in the impeachment resolution with the 'well-known corrupt company, Burisma,' and Hunter Biden, saying that Hunter Biden's appointment to the Ukrainian energy company 'looks dirty as it is.' That amendment was also defeated along party lines.

Explaining the resolution, Gaetz walked through Hunter Biden's substance abuse problems, which drew a sharp rebuke from Democratic Rep. Hank Johnson of Georgia. 'I would say that the pot calling the kettle black is not something that we should do,' Johnson said.

He then alluded to Gaetz's past DUI arrest, without mentioning him by name: 'I don't know what members, if any, have had any problems with substance abuse, been busted in DUI, I don't know,' Johnson said. 'But if I did, I wouldn't raise it against anyone on this committee.'

Gaetz was arrested for driving under the influence in 2008, but the charges were later dismissed. He said he was 'focused on the President' and didn't think the public was 'hanging on a traffic incident I had a decade ago.'

The impeachment debate even veered back two decades, as two lawmakers who were on the Judiciary Committee when President Bill Clinton was impeached in 1998 debated the merits of that case compared to the current impeachment proceedings.

'I would just like to note that the argument that somehow, lying about a sexual affair is an abuse of presidential power, but the misuse of presidential power to get a benefit somehow doesn't matter -- if it's lying about sex, we could put Stormy Daniels' case ahead of us,' said Rep. Zoe Lofgren, a California Democrat who was also a congressional staffer during the impeachment proceedings against President Richard Nixon. 'We don't believe that's a high crime and misdemeanor.'

Rep. Jim Sensenbrenner, a Wisconsin Republican who was an impeachment manager in 1998, argued there was a clear crime in the Clinton impeachment.

'The important thing is, is that Bill Clinton lied to a grand jury. That is a crime,' Sensenbrenner said. 'The article of impeachment that passed the House accused Bill Clinton of lying to a grand jury, a crime, and something that obstructs the ability of the courts to get to the truth. This is not what is happening here. Big difference.'

Republicans' efforts to change the text of the impeachment articles or block them entirely were ultimately futile, thanks to the Democrats' 23-17 advantage in the committee. But for each amendment, every member had the opportunity to speak for five minutes -- meaning Republicans could extend the committee meeting as long as they wanted to keep talking.

'If we have to fact-check you all night, we will,' Collins said in the afternoon, adding he wasn't concerned about the congressional ball at the White House taking place Thursday evening.

Committee vote sets up House to impeach Trump next week

House Democratic leaders have not said yet when the impeachment articles will go to the floor, but a vote is expected next week, along with votes to fund the government and hand the President a significant win by approving the new US trade deal.

When the impeachment resolution comes to the floor, the House will take separate votes on each article of impeachment. Two Democratic leadership sources say it's possible they could lose more than two Democrats — the number who voted against the procedural vote on the impeachment inquiry in October — when the floor vote takes place.

Those two Democrats, Reps. Jeff Van Drew of New Jersey and Collin Peterson of Minnesota, have already said they will vote against the impeachment articles. At the same time, Democrats are likely to pick up independent Justin Amash of Michigan.

But the sources acknowledge they could lose a handful more from swing districts on either or both articles. Many vulnerable members are not saying what they'll do yet, as they head back to their districts this weekend and get feedback from voters.

Democrats are not expecting mass defections and they expect to have more than enough votes for final passage.

Two other Democratic leadership sources say they are not planning to whip their members on the floor vote on the articles, meaning they won't twist arms to keep Democrats in line. That is intended to back up what Pelosi has been saying throughout the impeachment proceedings: The vote will be a 'vote of conscience.'

This story has been updated with additional developments Thursday.

John - Some showers will linger into our Friday

John - Still on the cool and showery side on our Friday