No traffic lights and days of darkness. Here's how life has changed inside Northern California's power shutoff 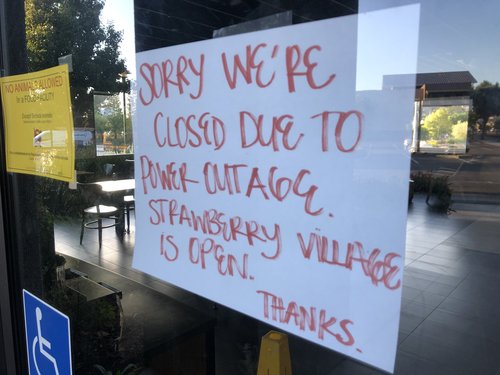 California's biggest utility has cut power to hundreds of thousands of residents to prevent wildfires, catching some by surprise despite months of warnings.

A forecast of strong winds is posing a major fire danger, prompting Pacific Gas & Electric Co. to launch the preventive outage to reduce the risk of blazes set off by power lines, the company said.

Here are some answers to key questions:

How long will the outages last?

At least a week for some.

The wind is expected to subside Friday, and PG&E crews will then examine their system for damage and begin to restore power for customers. That could take several days after the wind dies down, company officials said.

How many people will be affected?

By the time the sequence of outages is over, nearly 2 million people could be affected as it drags on for days, San Jose Mayor Sam Liccardo said. Customers across 34 counties will be affected.

Why deliberately turn off power?

Some of the deadliest fires in Northern California have been blamed on downed power lines.

Last year's devastating Camp Fire that killed 85 people and destroyed thousands of structures was started by electrical lines owned by PG&E. The company filed for bankruptcy in January as it came under pressure from billions of dollars in claims tied to deadly wildfires.

To avoid being blamed for another wildfire, some utilities have decided to cut power during high winds when the fire risk is elevated. In addition to PG&E, utility company Southern California Edison is also turning off power to a small number of people in affected areas.

Will people be able to charge their phones?

PG&E has set up about 30 community centers that are providing services including air conditioning, restrooms, bottled water and electronic charging stations.

How about traffic lights -- are they working?

Probably not in affected areas, so don't try to get on the roads, the San Jose mayor said. If you reach an intersection without a working street light, treat it as a four-way stop, Liccardo said.

Gas stations and ATMs will also be down during the shutoff, he said.

Will it affect cell phone service?

With the power out, residents will mainly rely on their phones for updates and communication with loved ones. And major cell phone companies say they're working to ensure the cell service does not go off, too.

Major companies, such as Sprint and T-Mobile, said they have generators available at major cell sites to ensure they remain in service and they're deploying generators to those that don't have them.

'We have permanent generators in key cell sites to ensure they remain in service and other sites are prepared with battery backup,' T-Mobile says.

What public facilities will be closed?

Police, fire, water, sewer and garbage-pickup services will continue, and the Bay Area Rapid Transit (BART) system isn't expected to shut down, though some stations may face escalator outage.

A number of schools canceled classes on Thursday, including UC Berkeley and Sonoma State University. All schools in the Napa Valley and Cloverdale unified school districts, along with some Santa Rosa schools, will be closed Thursday, as well.

People who rely on medical devices are urged to get them charged at community centers that will remain powered, officials said.