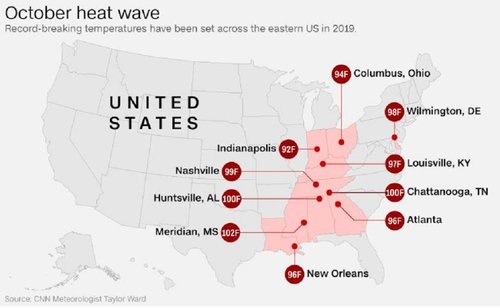 Yearning for crisp air and falling leaves? So is much of the eastern United States.Each day this week, dozens of daily high temperature records have b...

Yearning for crisp air and falling leaves? So is much of the eastern United States.

Each day this week, dozens of daily high temperature records have been set in the eastern half of the country. Some places even felt the hottest temperatures ever recorded in the month of October.

From Indianapolis to New Orleans, from New York City to Atlanta, temperatures are holding above 90 degrees Fahrenheit into the early days of autumn.

And after Atlanta saw history-making temperatures on Wednesday, more records could be broken Thursday or Friday.

New York's Central Park on Wednesday had its first 90-degree October day since 1941. Nashville, meantime, set a record for 90-degree days in a single year, with 97 -- just two less than the 99-degree temperature recorded there Wednesday.

Never fear, though: Cooler weather is on the way starting Thursday in the Northeast, then moving by the weekend to the South.

Unusual weather has made headlines this year

This lingering US heat follows other sweltering systems that have baked the Northern Hemisphere this year.

Europe dealt with a dangerous heat wave in August. And another moved in July from Africa's Sahara Desert to Greenland, threatening the world's second-largest ice sheet.