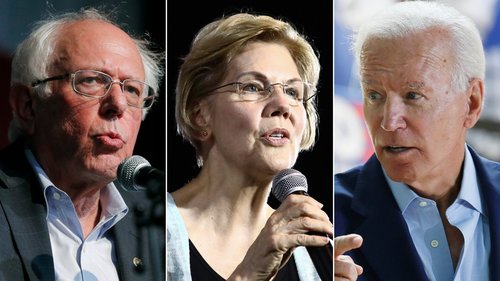 The three candidates are bunched together, each receiving about the same amount of support (Sanders 20%, Warren 20% and Biden 19%) from registered Democrats and Democratic-leaning independent voters.

Since Monmouth's June poll, Sanders and Warren have gained slightly (up 6 and 5 percentage points), while Biden has lost significant support (down 13 points).

A CNN poll conducted by SSRS, out last week, found Biden with 29% support, while Sanders and Warren were lower (15% and 14%, respectively).

The results don't impact who has qualified for the debates in September, with the Wednesday deadline fast approaching. This is Williamson's first poll hitting 2%, giving her one debate qualifying poll. Williamson, who has said she has met the donor threshold, would need three more polls to qualify.

Biden's decline comes mostly from registered Democrats and Democratic-leaning independent voters who consider themselves moderate or conservative, down 18 points since June. Meanwhile, Sanders and Warren have gained 10 percentage points each among those voters, an area that isn't considered strong for either of the very liberal candidates.

Biden also lost support among those who don't have a college degree (down 17 points) and those under the age of 50 (down 15 points).

Biden, Sanders and Warren all have similar favorable ratings -- around two-thirds of registered Democrats and leaners have a positive opinion of the candidates, but Warren has a much lower unfavorable rating than the other two (13% find the Massachusetts senator unfavorable, compared to a 25% for Biden and 24% for Sanders).

Additionally, Warren's favorability has gone up slightly since May, while Sanders has remained steady and Biden has slipped.

On the subject of health care, more than half (58%) of Democratic voters say it's very important that they nominate someone who supports 'Medicare for All,' and another half (53%) want to allow people to either opt in to Medicare or keep their private coverage over getting rid of all private insurance (22%).

The Monmouth University Poll of registered Democrats and Democratic-leaning independent voters was conducted by telephone August 16 through 20 among a random sample of 800 adults in the United States. Results in this release are based on 298 registered voters who identify as Democrats or lean toward the Democratic Party, which has a +/- 5.7 percentage point sampling margin of error.