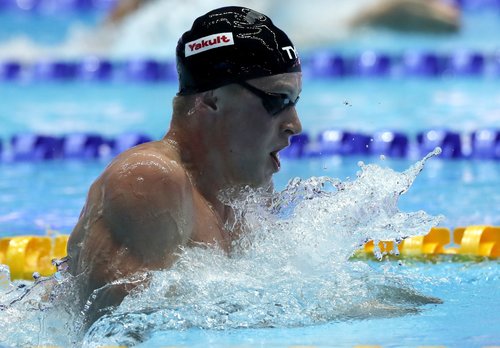 A couple of milliseconds make a world record of a difference.Swimming phenom...

A couple of milliseconds make a world record of a difference.

Swimming phenom Adam Peaty beat his own record time for the men's 100-meter breaststroke early Sunday, becoming the first man to finish the race in under 57 seconds.

The 24-year-old Brit clocked in at 56.88, nearly two seconds ahead of his opponents, in the event's semifinals at the 2019 World Aquatic Championships in Gwangju, South Korea.

He is scheduled to compete in the final round of the men's 100-meter breaststroke Monday.

Peaty previously set the record for the race in a gold medal-winning performance at the 2016 Summer Olympics in Rio de Janeiro, with a time of 57.13.

He told British Swimming, the sports governing body, that he doesn't plan on celebrating just yet -- he considers his feat a "bonus" before the finals.

"I've come here to win a world title, and that's tomorrow, and that's still my main focus," he said.

He's angling to defend his title at the 2020 Olympics in Tokyo.

Elsewhere at the championships, American Katie Ledecky lost to Ariarne Titmus of Australia in the 400-meter freestyle. Ledecky landed the silver medal for her performance, just 1.21 seconds behind Titmus.

Australia's Mack Horton, who earned silver in the men's 400-meter freestyle, refused to stand on the podium with gold medalist Sun Yang of China. Horton called Sun a "drug cheat" at the 2016 Olympics in Rio, two years after Sun tested positive for a banned substance and was banned from the sport for three months.