29 horses have died at Santa Anita this season. It's nowhere near the track's deadliest year -- not by a long shot 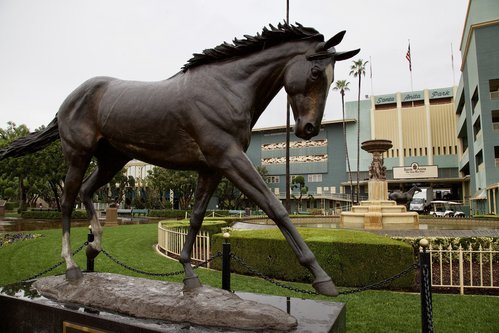 Horses die. It's part of racing, but a rash of deaths this year at Santa Anita Park have activists demanding the track be shut down.

The thing is, this season is nowhere near the deadliest at the California horse track.

After Formal Dude had to be euthanized following an injury Saturday and Truffalino died the following day after a possible cardiovascular issue -- bringing the total to 29 deaths since December -- the California Horse Racing Board recommended the track suspend racing for the rest of the season, board spokesman Mike Marten said.

PETA echoed the call for a shutdown, with its senior vice president, Kathy Guillermo, saying Santa Anita should not reopen until it replaces the dirt track with a safer synthetic surface, puts in place imaging technology capable of detecting pre-existing conditions in horses' legs and allows the Los Angeles County district attorney's office to finish its investigation into the deaths.

The Stronach Group, which owns the track, issued a joint statement with fellow stakeholders the Thoroughbred Owners of California and the California Thoroughbred Trainers, saying that it has improved racing conditions over the years and intends to remain open.

"Since wide-sweeping reforms have been instituted at Santa Anita, catastrophic injuries have dropped considerably ... decreasing by 50 percent in racing and by more than 84 percent in training," the statement said. "To be clear, there are no acceptable losses, and every day we work toward ending all serious injuries."

Figures from the state horse racing board back the track's assertion that deaths are down. Numbers going back to the 2007-2008 season, the furthest that the California Horse Racing Board included death tallies for each track, indicate 2019 may be the safest for horses since 2011, when 30 horses died in racing and training accidents.

The numbers pertain only to racing and training deaths and do not include deaths stemming from disease or stable accidents. Here are the year-end stats:

All of those years saw more deaths than 2019, so far. Twenty-nine would also be considered a "good year," as it were, at other popular California tracks such as Los Alamitos in Orange County and Golden Gate Fields in Albany.

On only four occasions since the 2007-2008 season has Golden Gate recorded fewer than 29 horse deaths, while it's only happened once at Los Alamitos. In that same time span, the deadliest years at those tracks were 2010 at Golden Gate, with 53 deaths, and 2009 at Los Alamitos, with 73.

While horse deaths nationwide have been on the decline -- from 790 racehorses in 2009 to 493 last year, according to the Jockey Club -- Santa Anita's numbers have fluctuated over the years. That's also the case for Los Alamitos and Golden Gate.

The Jockey Club says the incidence of fatal accidents increases on dirt tracks, and most of Santa Anita's problems have centered on its 1-mile dirt track, though there have also been deaths on its turf track.

Analysis of the last five years of data from the three tracks show Santa Anita has been the deadliest, with 232 racing and training deaths in 44,475 starts, the state horse racing board says. That's 5.2 deaths per 1,000 starts.

"To those who say, 'Well, horse deaths are eventual,' we don't accept that and we are doing everything possible to bring that number as close to zero as possible," track spokesman Stefan Friedman previously told CNN. "If we aren't out there shooting for zero, we aren't doing our job, and that's the No. 1 priority for us is horse safety."

The racing season ends June 23. As races are held mostly on Fridays, Saturdays and Sundays, that means only six more race days.

After the season, the next races will be the Breeders' Cup World Championships on November 1 and 2. The event is considered one of the sport's biggest and richest, with about $28 million in prizes doled out across 14 races last year.