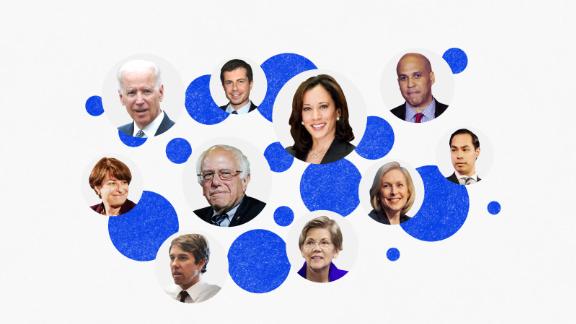 Joe Biden's official entrance to the 2020 campaign made him an automatic frontrunner. Chris Cillizza explains how he came out ahead.

The lengthy run-up to Joe Biden's official entrance into the 2020 race was, in a word, shaky. Which makes his flawless execution of the early days of his actual candidacy all the more impressive.

Since entering the race on April 25, the former vice president has rapidly solidified his status as the front-runner. Polling -- nationally and in key early states -- shows Biden lengthening his lead over all comers. He is driving the conversation in the race; suddenly 'electability' is the buzzword for 2020 Democrats. And he is the target of attacks from his rivals -- most notably Sen. Bernie Sanders of Vermont, who has gently chided Biden for his vote in support of the war in Iraq as well as for NAFTA. And President Donald Trump himself seems to be concerned about Biden, blasting off a series of tweets and retweets about him in the first days of the Democratic hopeful's candidacy.

Those are all the traits of a front-runner. And while it's not terribly surprising that Biden is back on top of the race, what we find remarkable is the ease -- and rapidity -- with which he has achieved that position. Now the question Biden has to answer is, how long can he stay on top?

Below, the 10 candidates with the best chance of winding up as the Democratic presidential nominee in 2020.

10. Julián Castro: Well, the good news for the former secretary of Housing and Urban Development is that he has qualified for the June debates. The bad news is almost everything else. On most days, he's at 0% or 1% in the polls. Castro's calls for impeachment hearings on Trump has mostly been met with silence. Castro certainly has a niche to fill in the primary as the only Latino candidate competing in a primary in which more than 10% of voters will be Latino. But it's not clear how far that will take him. Castro still has not even even hit 65,000 unique donors, despite being in the race since the beginning of the year. (Previous ranking: 10)

9. Kirsten Gillibrand: The New York senator made some waves over the weekend with a New York Times story detailing her argument that she is the most electable Democrat in the field -- citing her track record of winning Trump counties in her past Senate races. Which, maybe? Electability is very much in the eye of the beholder, though, as Trump proved in 2016. It still feels like Gillibrand is desperately seeking a foothold in this race. (Previous ranking: 9)

8. Cory Booker: The junior senator from New Jersey's best news of the last few weeks is how well Biden has done entering the race. We say that because Booker has tried to sell a message of unity, which, even if it hasn't worked for Booker, has worked for Biden. Our latest CNN poll does show that primary voters do want someone who can work with Republicans. Booker also is hoping that he will be able to break through with black voters who have been attracted to Biden's candidacy. You'll notice though that we use the word 'hoping' (i.e. it hasn't happened yet). So far, Booker hasn't attracted a large donor base and is polling below 5%. (Previous ranking: 8)

7. Amy Klobuchar: Klobuchar put her argument that she is one of the only candidates in the field who can win Democrats, independents and Republicans to the test this week, becoming only the second candidate to appear at a town hall on Fox News. (Sanders was the first.) It's too soon to know if her gamble paid off, but her decision to appear on Fox sends a clear signal that the Minnesota senator is playing the long game in this race. (Previous ranking: 7)

6. Beto O'Rourke: The big story here is that the fall continues for the former US representative from Texas. He ranked second in our list back in December and has slowly declined. O'Rourke has seen competition in the young, outsider department from South Bend Mayor Pete Buttigieg. He polled in the low double-digits upon launch, but is closer to that 5% mark now. It seems that Democrats liked him when he was taking on Ted Cruz in 2018, while they're more skeptical of him on the national stage. (Previous ranking: 5)

5. Elizabeth Warren: Slowly but surely, Warren continues to climb back up these rankings after she tumbled down them earlier this year. How? Well, Warren remains one of the leading liberals in the country -- and has leaned into that image of late, taking to the Senate floor earlier this week to call for Trump's impeachment. She's trending upward, for sure. But can she convince voters she's a better choice for liberals than, say, Sanders? (Previous ranking: 6)

4. Pete Buttigieg: The big question for the South Bend mayor is whether he's hit a wall in support. Buttigieg basically came out of nowhere thanks to his CNN town hall performance two months ago. He went from polling at about 0% beforehand to above 5% in the polls by early April, but hasn't really gotten much higher. If anything, polling indicates Buttigieg is slowly receding. The problem is he cannot seem to expand beyond his very liberal, wealthier and white base. Witness a recent rally he held in South Carolina aimed at securing black support. The crowd was overwhelmingly white. (Previous ranking: 4)

3. Kamala Harris: There's no question that the emergence of Biden as the race's clear front-runner has made it more difficult for the likes of Harris -- a clear contender for the nomination -- to get significant attention. Of late, Harris has seized on the idea of electability -- and its gendered and racial overtones -- as a way to wage war on the political and media establishment. (Previous ranking: 3)

2. Bernie Sanders: The last few weeks have been rough on the junior senator from Vermont. His polling has slid back to at best 15%. In the latest Quinnipiac University poll, he fell to third place. Sanders has gone after Biden's record in hopes making this a two-man race. He must hope that not only is Biden's bounce in the polls temporary (and there is good reason to think it is), but that he will be the beneficiary if Biden comes back to the pack. Polling at 15% and having universal name recognition is not an amazing place to be. (Previous ranking: 1)

1. Joe Biden: The former vice president is, at the moment, in a tier of his own in this race. And it's the top one. That's a remarkable bounce back for Biden from a very unsteady run-up to the announcement of his campaign. With every passing day that Biden rolls out more support in early voting states or a poll emerges that has him well ahead of the field, his position strengthens. And with every passing day Biden doesn't make any headline-grabbing gaffes, the better he looks, too. (Previous ranking: 2)