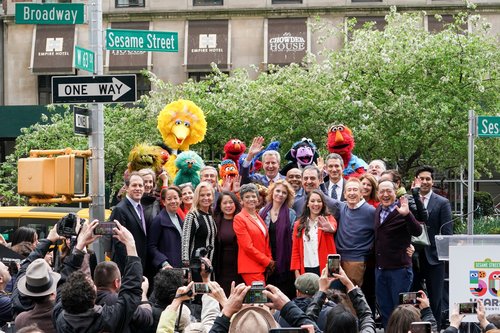 ðŸŽµ Can you tell me how to get, how to get to Sesame Street? ðŸŽµYes, actually, we can.It's at the intersection of West 63rd Street and Broadw...

ðŸŽµ Can you tell me how to get, how to get to Sesame Street? ðŸŽµ

Yes, actually, we can.

It's at the intersection of West 63rd Street and Broadway.

In honor of the show's 50th anniversary, New York City made "Sesame Street" a real intersection in the Big Apple. Permanently.

Joined by Big Bird, Elmo, Bert, Ernie and all the others, Mayor Bill de Blasio changed the name of the Manhattan intersection at a ceremony on Wednesday.

He also dubbed May 1 as "Sesame Street Day."

"Fifty years of extraordinary programming, 50 years of making people's lives better, 50 years of helping children believe in themselves," he said.

The show has been headquartered in New York City since 1969 and has always been based between West 63rd and West 64th Streets.

While an intersection was temporarily renamed 10 years ago, this time it's for good.

"There is also something beautiful for us watching when they were young to see our own city, even our own neighborhood portrayed in Sesame Street," de Blasio said. "And you cannot take the New York City out of Sesame Street, can you?"

So on the next sunny day, head on down to Sesame Street.