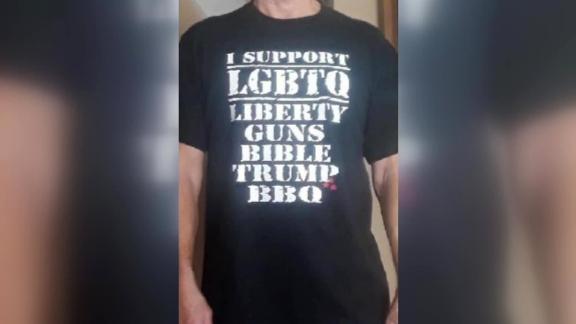 A barbeque food truck in Grant County, Kentucky, is under fire for selling a T-shirt that reads "I support LGBTQ -- liberty, guns, Bible, Trump, BBQ."

Jamie Smith, owner of Belle's Smokin' BBQ, drew criticism after he posted a photo of the T-shirt on social media. LGBTQ commonly stands for lesbian, gay, bisexual, transgender and queer or questioning.

"But here's the bottom line, it's not just a simple acronym," Facebook user Chad Reynolds wrote. "GLBTQ are already waking up every day with a mountain to climb in terms of acceptance. The last thing we need is a food truck mocking us."

Others defended the shirt. "I'll proudly wear one or any of their shirts. These are great people and awesome food. People really should get over being so sensitive about everything," wrote Facebook user Connie Thomas.

Smith took the original post down and replaced it with a statement that said: "We apologize if we have offended any groups of people, organizations or individuals with our shirts. We respect all beliefs and lifestyles and want no ill will towards anyone."

Smith told CNN affiliate WXIX that he started selling the shirt two years ago, and that he will continue to sell them.

He said he had already sold nearly 100 shirts before he posted about the shirt on his Facebook page. Smith told WXIX that, despite the backlash, the shirts have now sold out and he has a waiting list.

CNN reached out to Belle's Smokin' BBQ for comment but has not heard back.

The food truck is based in Williamstown, Kentucky, but Smith takes Belle's Smokin' BBQ all over the state. After the post about his shirt went viral, he says he was uninvited from some events that the truck had previously been booked to attend.

"If this has offended anyone that wasn't our intention, it was just a good play on words," Smith told WXIX.