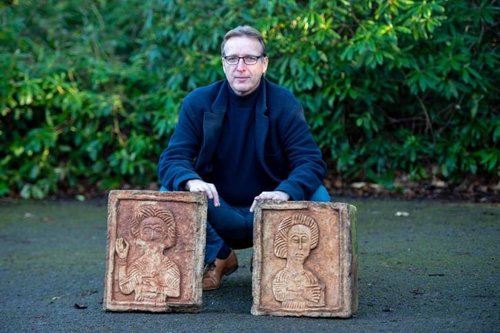 A missing Picasso painting worth $28 million has been recovered by a Dutch art detective, 20 years after it was stolen from the yacht of a Saudi sheikh off t...

A missing Picasso painting worth $28 million has been recovered by a Dutch art detective, 20 years after it was stolen from the yacht of a Saudi sheikh off the south coast of France.

The 1938 masterpiece, entitled "Portrait of Dora Maar" or "Buste de Femme (Dora Maar)," vanished from the yacht of Saudi billionaire Sheikh Abdul Mohsen Abdulmalik Al-Sheikh while it was being refurbished in the town of Antibes in 1999.

The painting previously hung in Picasso's home until his death in 1973 and depicts the artist's muse.

The case baffled French police and it was feared that the artwork had been lost forever, until rumors emerged that the painting had surfaced on the Dutch black market.

Arthur Brand, a renowned Dutch art detective dubbed "the Indiana Jones of the art world," said he first learned that a stolen Picasso painting had emerged in the Netherlands in 2015, but did not know which work it was.

A four-year investigation ensued, which culminated in two intermediaries turning up at Brand's apartment 10 days ago with the missing painting in hand.

"They had the Picasso, now valued at 25 million euros, wrapped in a sheet and black rubbish bags, with them," Brand told Agence France Presse. "I hung the Picasso on my wall for a night, thereby making my apartment one of the most expensive in Amsterdam for a day," he joked.

Brand discovered that the painting had been circulating the criminal underworld for numerous years, regularly being used as "collateral" and appearing "in a drug deal here, four years later in an arms deal there."

He received his best lead earlier this month, when "two representatives of a Dutch businessman" contacted him, saying that their client had the painting. "He was at his wits' end," Brand said. "He thought the Picasso was part of a legitimate deal. It turns out the deal was legitimate -- the method of payment was not."

The art detective pursued the lead and told the intermediaries that they had to act quickly to secure the painting in case it vanished once again into the criminal underworld.

The intermediaries subsequently delivered the painting to Brand's flat, and Picasso experts from the Pace Gallery in New York flew into Amsterdam to verify it. The painting has since been handed to an insurance company, which is currently determining what to do with it.

Christopher Marinello, CEO of Art Recovery International -- a law firm specializing in the recovery of stolen artworks -- told CNN that it is "highly significant and very encouraging" that insurance companies are pursuing stolen artworks long after cases have been closed. "It is great to see a work of this importance surface and not be the subject of intense litigation."

He noted that it is "urgent" for anyone who has had a piece stolen to report the loss to an international database, such as the nonprofit Artive Database. That enables dealers and auction houses to be aware of whether they are handling stolen artworks.

"It is important to show that the market for stolen art is shrinking and that crime, in most cases, does not pay," Marinello said. He added that the robbery of precious artwork has "become an industry" for certain gangs, who "steal artworks and then ransom insurance companies."

"Attempts are made by the criminals to cash out quickly. When that becomes impossible, the artwork will be traded at a fraction of its true value (less than 10%) for drugs, guns, etc. Some thieves may acquire stolen works as a sort of a 'get out of jail free' card -- to use as a bargaining chip if ever arrested. This has worked in the past with prosecutors and still works today."

Still, the recovery of the Dora Maar painting is raising some questions, for instance as to whether anyone had been paid.

An industry source, who requested anonymity, told CNN that a key challenge in the recovery of precious artworks is the use of payments to tipsters and informants, as this "encourages further theft."

"They are just talking about intermediaries -- did the owner just hand over the painting or were payments made?"

The source pointed to reports in 1999 that insurers at Lloyd's Insurance Group offered a reward of £350,000 ($462,522) for the return of the painting intact. The current reward offered for the artwork remains unknown.

Brand has recently recovered other priceless artworks, including a 1,600-year-old mosaic which was stolen from a church in Cyprus. In 2015 he also recovered "Hitler's Horses," two bronze statues made by Josef Thorak, one of two official sculptors of the Third Reich.

CNN has contacted Brand with a request for comment, but has not yet received a response.

Correction: An earlier version of this article gave the incorrect name of a database recommended to report a stolen item.