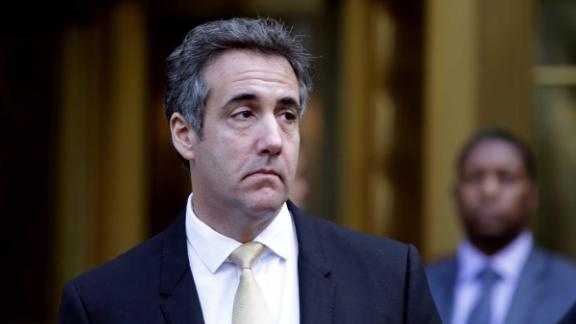 President Donald Trump's former personal lawyer Michael Cohen has been subpoenaed to testify before the Senate Intelligence Committee in mid-February, according to a source close to Cohen.

It is not clear how Cohen will respond. The source said that Cohen has the same concerns regarding the safety of his family that led him to postpone his scheduled public appearance before the House Oversight Committee next month.

Senate Intelligence traditionally does their interviews behind closed doors, not publicly.

The congressional subpoena is the first of potentially several that Cohen could face before he reports to prison on March 6 for his three-year jail sentence after pleading guilty to tax and campaign finance crimes, as well as lying to Congress in his 2017 congressional testimony.

Virginia Sen. Mark Warner, the top Democrat on the committee, declined to comment on the subpoena, but said it was essential that Cohen testify again.

'Mr. Cohen was someone who lied to the committee, that got him into real jeopardy. ... He has an enormous number of unanswered questions about Trump Tower and a variety of other items that we need answers to,' Warner said.

Cohen was scheduled to appear before the Oversight Committee on February 7 voluntarily, but he announced Wednesday he was postponing that appearance, citing threats to his family from Trump and Trump's attorney Rudy Giuliani.

'Due to ongoing threats against his family from President Trump and Mr. Giuliani, as recently as this weekend, as well as Mr. Cohen's continued cooperation with ongoing investigations, by advice of counsel, Mr. Cohen's appearance will be postponed to a later date,' Davis said in a statement Wednesday.

Trump suggested in interviews and on Twitter that Cohen cut a deal to protect his wife and father-in-law, though he hasn't offered any evidence of those claims. On Wednesday, he dismissed Cohen's concerns about threats. 'Well, I would say he's been threatened by the truth,' Trump told reporters.

Cummings told reporters on Wednesday that he believed Cohen was acting in good faith with the committee, and had a general concern for his family's safety. But he vowed that Cohen would ultimately appear, though he did not say whether he would issue a subpoena.

'I promise you that we will hear from Mr. Cohen,' Cummings said. 'We will make those determinations soon and we will let you know how we plan to proceed, but we will get the testimony as sure as night becomes day and day becomes night.'

Cummings said that he felt he could bring in Cohen even after he reports to prison, but Schiff said he thought it was necessary for Cohen to appear before March 6.

'We've been in discussions with him and he understands that we'll be wanting him before our committee. We hope to get his testimony voluntarily, but if necessary we'll use a subpoena,' Schiff said Wednesday.

Cohen's testimony before the Oversight and Intelligence panels would cover different topics. An Oversight Committee would be public, which means that Cohen would not testify on any matters concerning the ongoing special counsel's investigation into Russia — and topics like the Trump Tower Moscow project and the payments made during the campaign to women could be off-limits, too.

Cohen already appeared behind closed doors separately before the House and Senate Intelligence Committees in 2017. In December, he pleaded guilty for lying to Congress about how long the Trump Tower Moscow project discussions extended into the 2016 campaign.

Schiff says he wants Cohen to testify behind closed doors so he can be asked questions about the Russia investigation.

In the wake of his guilty plea, Burr said he was confident that he would bring in Cohen before he reported for prison.

This story has been updated with additional developments from Thursday.