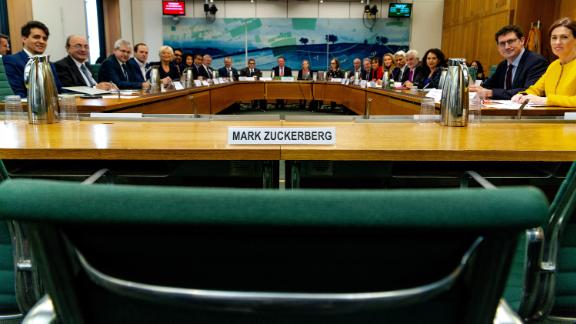 Facebook CEO Mark Zuckerberg did not attend an international committee hearing on fake news and disinformation. The hearing came just as committee chair Damian Collins obtained internal Facebook documents that had been under seal by order of a California court.

The British lawmaker who seized a cache of confidential Facebook documents says he could make them public within a week.

Damian Collins, the chairman of a British parliamentary committee investigating disinformation, told reporters he would release the documents once they had been reviewed and stripped of personal data.

"I can't give you an exact date, but I would hope we would be in a position to publish them very soon," he said Tuesday. "Certainly within the next week or so, that would be my hope."

Facebook (FB) has fought for months to keep the documents private. They are part of a court case in California between Facebook and a small app developer.

Collins was able to obtain copies of the documents just days before his committee was joined by lawmakers from eight other countries for an unusual hearing related to Facebook and disinformation in London on Tuesday.

The inaugural hearing of the "International Grand Committee on Disinformation" was attended by lawmakers from Argentina, Belgium, Brazil, Canada, France, Ireland, Latvia, Singapore, and the United Kingdom.

Much of the discussion focused on the absence of one star witness. Facebook CEO Mark Zuckerberg was repeatedly asked to attend, but the tech company has instead dispatched one of his deputies.

The committee left an open seat for the CEO on Tuesday, complete with a nameplate.

The lawmakers questioned Richard Allan, a former member of the House of Commons and the company's vice president of public policy for Europe, the Middle East and Africa.

Charlie Angus, a lawmaker from Canada, opened the hearing with a broadside.

"We've never seen anything quite like Facebook, where while we were playing on our phones and apps, our democratic institutions ... seem to have been upended by frat boy billionaires from California," he said.

Collins, who had claimed the legal authority to publish the Facebook documents ahead of the hearing, did not act on that threat.

The documents are under court seal in the United States. Facebook wrote to Collins over the weekend asking him to consider hearing from the US court before making the documents public.

Collins wrote in a response that he had the power to publish the documents, which were seized from the owner of the app developer while he was visiting London. But he said Tuesday he would not release the documents during the hearing.

"We are going through the documents we have received," he told reporters when asked why he had not published them. "You probably understand there is a very large number of them."

"It is not a lack of desire on our part to publish them, I can promise you that," he added.

This protection from prosecution ensures freedom of speech, including documents and reports published as part of parliamentary proceedings.

Collins did, however, question Allan during the hearing about one email included in the document trove that was written by a Facebook engineer.

He said that the email, written in 2014, warned that entities with Russian IP addresses were collecting billions of Facebook data points a day through Pinterest.

Allan did not address the alleged incident directly, but he told Collins that "the information you have seen is at best partial and at worst potentially misleading."

Facebook told CNN Business that "the engineers who had flagged these initial concerns subsequently looked into this further and found no evidence of specific Russian activity."

Later on Tuesday, Facebook released a copy of the email chain with the engineer's warning. The full chain showed that the engineer appears to have been mistaken.

In a statement, Facebook said, "We looked into this at the time and determined that the calls to the API [Facebook system] were all legitimate API calls from Pinterest and not from Russia. We also determined the volume of actual calls to be around 6m and that the suggestion of billions was inaccurate."

It is not clear if the committee had access to the entire chain or just the emails in which the engineer initially raised the false alarm. CNN has asked the committee to clarify.

Facebook has endured a year of negative headlines about fake news, election meddling and privacy concerns. Zuckerberg pushed back on some of the unrelenting critical coverage last week in an interview with CNN Business.

Allan, a member of the House of Lords, said he was responsible for the decision for Zuckerberg not to attend the hearing.

Asked how that looked for a member of parliament, he said: "Not great, I guess is the answer."