The great debate on gun violence 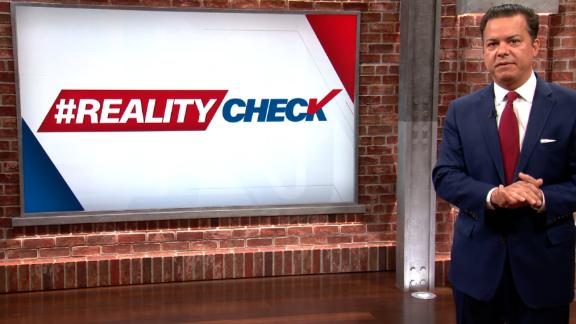 Violent crime in the US increased in 2020 after declining for decades. CNN's John Avlon looks at what politicians can do to prevent this increase in violence after the nation's latest mass shooting left nine dead in San Jose, California.

Commentators have increasingly speculated about whether these two conversations will collide, with public safety concerns pushing criminal justice and policing reform to the side. The implicit assumption is the two are intrinsically in tension: either we can reduce gun violence, or we can reform the justice system. But, in fact, the data tell us this "zero sum" view is wrong.

Gun violence is surging. In 2020, after months of pandemic lockdown, economic instability, young people out of school and a 'hidden epidemic' of pandemic-related trauma, America's largest cities suffered an estimated 30% increase in homicides. These numbers don't appear to be slowing down. In fact, as we enter what may be shaping up as one of the deadliest summers on record, gun sales are reaching record highs.

In years past, spikes in violence prompted calls for punitive measures like mandatory minimums in sentencing. Partly this was due to skepticism that anything besides "tough on crime" works. In the 1960s, the War on Poverty was followed by a doubling of the homicide rate; in the 1970s, social scientists concluded rehabilitation and prevention programs didn't work.

But we've learned a lot since then about the nature of gun violence in America. And what we've learned shows us that it's possible (or more than that -- deeply necessary) to reduce the harms from gun violence and from the criminal justice system itself at the same time. As cities across the country confront calls to both defund the police and reduce gun violence, that insight is critical.

First, we need to leverage what we've learned about the promise of community violence intervention (CVI) programs, especially those that help address the untreated trauma rampant in the underserved urban neighborhoods experiencing the highest rates of gun violence.

Consider, for example, the READI program, started after a 2016 spike in gun violence in Chicago and run by the nonprofit Heartland Alliance here. READI (stands for Rapid Employment and Development Initiative) works with the most vulnerable men in Chicago -- -- 70% of participants have been shot before and 90% have been arrested -- and over two years of intensive programming, connects them with jobs or job training and trauma-informed supports.

Preliminary findings on READI that my research center (the University of Chicago Crime Lab) helped generate are promising: Participants who went through the the program were 40% less likely to be the victims of gun homicides or shootings. We have the chance to expand READI and programs like it across the country right now. President Joe Biden has called on Congress to invest $5 billion in them, and local city and state officials can add to that investment through the American Rescue Plan funding they've already received.

Second, we need to address the pipeline of legal and illegal guns that fuels the violence. In 2020, gun sales in the United States rose by some 65% over 2019, according to Small Arms Analytics, a consulting firm based in Greenville, South Carolina.

A striking number of those guns that end up at crime scenes come from the same small number of gun dealers.

For example, in Chicago, just two gun stores were the source of more than one of every 10 guns recovered or confiscated by law enforcement in 2017. The federal agency responsible for ensuring these gun dealers follow the law, the Bureau of Alcohol, Tobacco, Firearms and Explosives (ATF), has for years been vastly (and intentionally) under-resourced. The ATF employs 811 field investigators to carry out compliance inspections of more than 53,000 federally licensed firearms dealers.

No wonder that, at most, only 11% of all firearms dealers were inspected in 2020. Congress could address this staffing shortage by providing ATF the resources they need to adequately inspect dealers and enforce the law. In the meantime, there are executive actions the Biden administration can take to crack down on illegal gun trafficking, including requiring gun stores to video-record sales, increasing the number of gun sellers that must conduct background checks, and releasing more data on the underground gun market

Finally, we must work to make policing more transparent and accountable -- not just because it's the right thing to do, but because that's when policing is most effective. Researchers have found that publicized cases of police violence thwart the suppression of law breaking by driving down 911 calls, ultimately making cities as a whole, and Black residents in particular, less safe.

And while some people come to the conclusion that nothing can be done to change policing in America, we have some encouraging indications that "consent decrees" could be a useful tool to make policing more effective and more just. For example around 20 years ago, the Los Angeles Police Department entered into a consent decree with the US Department of Justice under which the department promised to adopt reform measures under a court's supervision.

By the time the consent decree ended in 2009, Los Angeles had experienced a 55% decline in violent crime and a consistent drop in the use of serious force by law enforcement. By 2019, shootings by Los Angeles police officers reached a 30-year low.

Given the disproportionate rate at which Black men are killed by police in the US, calls to defund the police are not surprising. But fixing or reimagining policing to reduce the harms from enforcement will save more lives than entirely abolishing the police -- which the data historically suggest could cause overall rates of violent crime to go up, with an outsized share of additional victims likely to be Black and Brown.

Because our leaders have for so long viewed solving the overlapping crises of gun violence and harms created by the criminal justice system as being in tension -- a zero-sum tradeoff -- we've been stuck in unhelpful debates about choosing one crisis over the other. We must and can find solutions that advance justice and reduce gun violence simultaneously -- otherwise we'll be having the same conversations next year, and the year after.

Hi: 74° Lo: 52°
Feels Like: 55°
More Weather
Fall has started off exactly as you would have anticipated and it looks like we should have a number of dry days still ahead, but this isn’t a permanent switch, because heat is pegged to return.