After a watershed moment of violence, Asian Americans begin to speak out 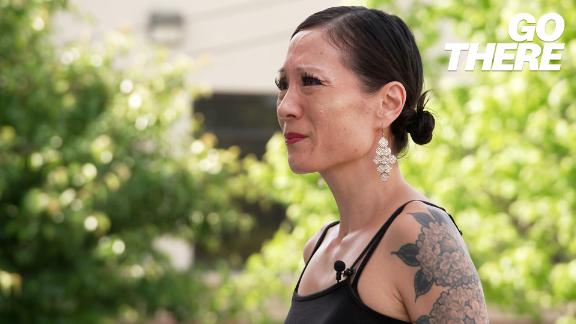 The increase in anti-Asian hate and violence has forced many Asian Americans to have difficult conversations about race. For one family, dinnertime has turned into lessons on racism. But for another, a Korean-adoptee feels isolated from the AAPI community. Meanwhile, a college student has given up medical school to focus on his viral Asian-centric media company. CNN's Natasha Chen reports.

The first time I felt someone making assumptions based on my ethnicity, I was no older than 7, standing outside my ballet class in Foster City, California. A woman asked me a question about the dance studio, and I hesitated because I was sometimes shy when speaking to strangers.

"Oh, do you not speak English?" she asked.

I was born and raised in the San Francisco Bay Area, but I lived in a multigenerational household for the first few years, where only Mandarin was spoken. I didn't learn to speak English until I was in preschool.

Small interactions like this gave me hints that people like me were looked at as not entirely belonging here. The same assumption was at the root of a more hostile interaction in May 2020, when, in the midst of our Covid-19 coverage, a person yelled at me to go back to my "f***ing country" and blamed me for the coronavirus.

These moments are common among the AAPI community. And they are shared among many other immigrant cultures.

Our parents raised us to ignore the aggressions. Our task was to excel in school, and to be respected and recognized through our work and our behavior. In some ways, we perpetuated the myth of the "model minority."

At the same time, I felt supported and validated in my community, where being Asian American was normalized, as the population at that time was approaching one-third Asian. Being proud of my culture came naturally in that setting. I learned to read and write Mandarin at Saturday Chinese school, learned Chinese and Taiwanese history and shared our culture -- and a lot of our food -- with our non-Asian friends. I even wrote about my family heritage for an essay contest in 6th grade.

But as a child, I don't remember hearing the term "activism" as it relates to Asian Americans. Speaking out against injustices was something done only in dire circumstances. Being the squeaky wheel would not help us be accepted and embraced by the mainstream.

But over the past few years, younger generations of Asian Americans seem to have shed some of these notions of traditional propriety or habits. Even older generations and immigrants have been thrust into this uncomfortable space of visible anti-Asian hate, culminating in the Atlanta spa killings on March 16.

"It's an awakening moment for Asian Americans to stand strong," Pastor Byeong Cheol Han, of the Korean Central Presbyterian Church in Atlanta, told me. "Stand up and raise our voice. And participate in [the] social justice movement. Many Asian Americans tend to avoid those kind of things. It's not our business, we're just focusing on our survival, but this is an awakening for us."

In his Korean speech to the crowd in front of Gold Spa, the only English words I picked up were "I can't breathe" and "Martin Luther King Jr." He was referencing not just the plight of Asian Americans but of all people of color.

The "awakening" he described is the result of years of staying quiet, and even occasionally meeting resistance from members of our own community who believe that highlighting one's victimhood can be cause for embarrassment.

The pattern of anti-Asian aggression also barely got a mention in many American history books. Some of us, for example, had to search for information on the Chinese Exclusion Act, the 1882 law that prohibited immigration of Chinese laborers, Japanese American internment camps and the story of Chinese American Vincent Chin, beaten to death in 1982 by two White men.

But in the past year, anti-Asian hate has become so prevalent that it has leapt off the pages of books and into our everyday consciousness.

The nonprofit Stop AAPI Hate began tracking incidents of racism and discrimination on March 19, 2020. Since then, the coalition has received at least 3,795 firsthand complaints, with at least 503 anti-Asian hate incidents reported in January and February of 2021.

The combination of escalating rhetoric about Asian people during the pandemic, and the creation of a reporting outlet, has raised the visibility of a long-existing problem. The awareness of anti-Asian hate is finally permeating the mainstream.

And if 2020 was a continuous trickle of individual assaults, the Atlanta spa killings were a watershed moment -- six of the eight victims were women of Asian descent.

"It finally made it something that was hard to ignore," said Dr. Carol Pak-Teng, an emergency room physician who has built a community for AAPI physicians and raised money after the shootings. "Like I think a lot of Asian Americans kind of at least heard a little bit about the spike in violence...it opened up an opportunity to say like, 'Oh my God. Yeah. Like this is really happening.' And now ending in a mass shooting, which is really...just hard to ignore anymore, and that we needed to just actually do real, upfront work to highlight the unfortunate truth that we were living."

Michael Lai, CEO of Asian Feed, a news and lifestyle publication, told CNN that his team heard many cries for help in the month leading up to the Atlanta killings. As elderly people were beaten and attacked in San Francisco and New York, he said it was almost as if they saw more coming.

This activism may still be uncomfortable for many immigrant families that have focused on pure survival for so long, but whose silence shouldn't be mistaken for apathy.

So whether we're adults making sense of tragedy, or children who are simply shy, this is a moment to find our voice.

And it's ok to speak.

Hi: 76° Lo: 60°
Feels Like: 72°
More Weather
Clear cool and dry to begin your weekend, but both afternoons should be a little bit above what we expect for this time of year temperature wise. Rain chances begin to return late Sunday night, with at least two chances for storms over the next week, summer could be strong.

Husband shot in leg in Tupelo

Husband arrested for assault in Tupelo

Dozens of kids picked pumpkins at the Buffalo Park in Tupelo

Matt's 5pm Friday Forecast - Clear to start the weekend, but multiple rain/storm chances are ahead