What Joe Manchin gets exactly right 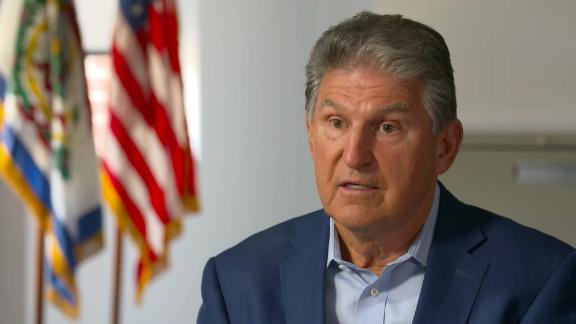 Democratic Sen. Joe Manchin of West Virginia told CNN that the deadly attack on January 6th at the US Capitol "changed" him, saying, "you can't have this many people split to where they want to go to war with each other" as he calls for Democrats and Republicans to work together on top legislative priorities in a divided Washington.

US Senator Joe Manchin of West Virginia is in the catbird's seat -- the pivotal politician in a 50-50 Senate. He's the keeper of the keys to President Joe Biden's policy kingdom, whether the President or the progressives pressuring him like it or not.

And thank goodness there's at least one Democrat with his own mind, unblinded by rank partisanship. Manchin, if he's sincere, appears to be clear-eyed about the poisonous politics infecting both parties.

"January 6 changed me. I never thought in my life, I never read in history books to where our form of government had been attacked, at our seat of government, which is Washington, DC, at our Capitol, by our own people," Manchin told CNN's Lauren Fox, adding, "So, something told me, 'Wait a minute. Pause. Hit the pause button.' Something's wrong. You can't have this many people split to where they want to go to war with each other."

Manchin is, of course, still a committed Democrat at heart, more likely than not to support liberal policies. But his hesitation to remake the Senate into a carbon copy of the US House of Representatives, where bills pass with a simple majority and bipartisanship is nowhere to be found, is refreshing.

Manchin risks little politically by standing in the way of his party's progressives who seek to move the nation too far to the left. His home state of West Virginia, after all, is full of Republican voters who overwhelmingly voted for former President Donald Trump in 2016 and 2020.

But he certainly risks headaches, chiefly from left-wing partisans who have no interest in reaching out to Republicans to seek compromise. After an election that produced Democratic control but relative stasis in Washington, DC (an even Senate, nearly an even House and a presidency built on 44,000 votes in a handful of states), many liberals would discard the average conservative's ideas in a New York minute, giving little thought or care to what that would do to America's body politic.

Whether Manchin ultimately compiles a center-left voting record is irrelevant. I expect him to vote for most, if not all, of Biden's agenda, as Manchin himself tries to shape -- and perhaps moderate -- some of the administration's most progressive ideas.

Most consequential are Manchin's views on the Senate itself -- and his unwillingness to allow the character of the unique body to be changed by eliminating the legislative filibuster rule or using the process of reconciliation to steamroll the minority party.

Reconciliation was "never intended to be our main focus or our main vehicle for legislation. That's not legislating. It has to be used from time to time. I understand that," Manchin told CNN. But, he added, there is "a time and a place."

The Senate was designed as the cooling saucer, in former President George Washington's estimation, to sit under the House's sloshing hot coffee cup. The passions of the people boil over in the House, producing legislation that can be cooled, improved and made palatable in the Senate.

In theory, the two chambers wind up legislating in a way that satisfies the most people, and at least gives comfort to those unhappy with the outcome that their voice was at least heard and considered. The House was made to ignore minority viewpoints and the Senate was made to listen and act accordingly.

Our closely divided country could benefit from leaders who can produce outcomes that solve problems without trampling on half the country's views. Getting rid of the filibuster and abusing reconciliation is simply not keeping with the spirit of the body, and Manchin knows it.

Yes, the Senate was made for this moment in our divided nation, and perhaps it was made for someone just like Manchin, who, if he keeps his word on these vital procedural matters, will be long remembered as a leader who strengthened an institution -- instead of joining the angry mob of his own party trying to burn it down.

Hi: 72° Lo: 55°
Feels Like: 55°
More Weather
High pressure has moved into our area and drier air has moved back into our area. Temperatures for daytime highs will get warmer and warmer over the next several days.