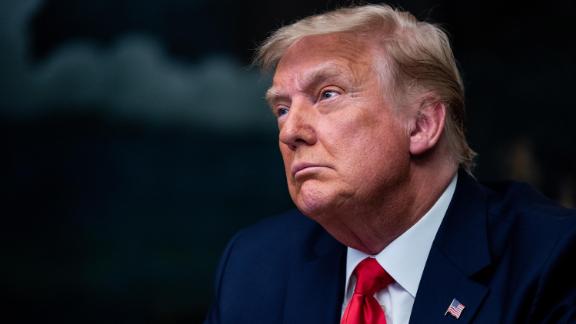 As President Donald Trump's time in office comes to a close, there are reports he's considering a number of potential pardons for family members and his attorney Rudy Giuliani. CNN's Kaitlin Collins reports.

The United States Constitution was designed to meet the evolving demands of our nation. In just a few short pages, it lays out a robust system of representative government that continues to serve as the basis for the oldest modern democracy in the world. That isn't just because of the brilliance of the framers, it's because of the American people's dedication to living up to the Constitution's promises and aspirations.

Since the beginning, we have tested, stretched, twisted and, most importantly, amended our foundational law. This dynamic process is a design feature, not a flaw, of our democracy. Former President Thomas Jefferson wrote that "laws and institutions must go hand in hand with the progress of the human mind." We incorporate what we learn to make our nation a fairer, more just and more inclusive place, with a government that is more resilient.

The broad language used in the Constitution was designed to allow for flexibility, but it also assumes public interest-minded leaders and a respect for institutional norms. Since President Donald Trump's election in 2016, I have been deeply concerned that he would put his personal interests before those of the nation and ignore the precedents that help make our government run. His continual abuses of power are not surprising, but I am shocked by how brazen and quick Trump is to use the levers of government and the president's constitutional authorities to protect himself, his friends, family and businesses.

In 2017, I sponsored a constitutional amendment to limit the President's pardon power in anticipation of his corrupt conduct. That power was designed to provide the president with the ability to mitigate potentially excessive sentences or unjust legal outcomes. It is intended as a tool of mercy and justice.

Trump has turned the pardon power on its head. Rather than a tool to better pursue justice, he is using it to circumvent justice. My latest proposal, introduced in 2019, would prohibit the president from pardoning himself, his family, members of his administration and campaign employees. This would help prevent the exact type of self-dealing and reversals of justice of the pardons we are seeing issued now.

With a president unbound by the institutions and norms of our democracy, the ability to pardon himself or herself and his or her family could be abused to create a quasi-hereditary monarchy where the first family is literally beyond the reach of the law. That is the exact opposite of our national principles of the rule of law, equal justice: that no one can be the judge at his or her own trial.

A president with the ability to pardon administration officials can easily pervert our entire system of laws. An appointee could act criminally in pursuit of the president's agenda so long as the president approves. The Constitution sets up a system of shared powers and checks and balances, not absolute authority by the executive.

Even worse, an unlawful president could direct officials to act criminally and dangle the prospect of pardon. That creates a system of rule by decree. Laws would be completely at the discretion of the president -- a recipe for autocracy.

Should you think this is a far-fetched scenario, it apparently has already happened. Trump reportedly instructed Department of Homeland Security officials to shut down the border entirely to migrants, saying if they got in trouble, he would pardon them. (Of course, Trump and DHS have denied he offered any such pardon.)

There is a similar and related concern regarding campaign officials. If a president could pardon campaign officials for criminal conduct, then a person could do anything to become president, so long as he or she wins in the end. This creates a race to the bottom, where election and campaign laws have no meaning and the will of the people is secondary.

This isn't some crazy theory. Last week, the President announced his pardon of former national security adviser Michael Flynn, who twice lied to the FBI under oath. This followed efforts by Attorney General William Barr to try to have the case be dismissed in the spring. Trump's pardon halted the legal process and excused Flynn's misconduct.

The President is sending a clear message: If you supported me, your crimes don't matter. Last week's pardon is likely just the first of many. The President is reportedly considering a pardon "blitz," including other former campaign officials like Paul Manafort, who shared Trump campaign internal information with a Russian intelligence asset in 2016.

Even if a president acted totally appropriately in pardoning such individuals, the perception is damning. It would only be natural to suspect that there was a bit of home cookin'.

I was always taught that you could learn a lot about somebody by the types of people they surround themselves with. If Trump feels he needs to pardon his closest advisers, friends and family, what does that say about his own culpability? I think of what we already know -- that the President, as "Individual-1," according to former special counsel Robert Mueller, directed the felonious campaign finance scheme that put his personal lawyer, Michael Cohen, in federal prison -- and wonder what else Trump could be trying to hide. (Trump still denies any involvement in the scheme.)

The entire nation has watched Trump's continual effort to obstruct the inquiry into Russian interference in the 2016 election. By pardoning his allies, he could be impeding investigations into his own conduct and obstructing justice.

The bottom line is that, with a president more concerned about himself or herself than the nation, a pardon power that includes family, administration officials and campaign employees is overbroad and dangerous. The president could elevate himself or herself -- and his or her whims -- above the democratic process. These pardons wouldn't be "tak(ing) Care that the Laws be faithfully executed," as delineated in Article II of the Constitution, but would be self-dealing and constitutionalized corruption.

Come January 20, Trump will return to private life. After years of ripping at the Constitution and the norms that support it, the American people must demonstrate our democracy's resilience. But for the Constitution to truly endure, we should incorporate our current experiences and explicitly prevent these types of abuses.

One killed in Aberdeen crash

Mississippi expanding vaccine eligibility to those ages 50 plus

Suspect from Indiana in custody for Oxford cold case

BancorpSouth Arena working to safely get back in the groove

Those 50 and older now eligible for vaccine in Mississippi

BancorpSouth Arena working to safely get back in the groove

Mississippi expanding vaccine eligibility to those ages 50 plus