US Women's National Team stars on equal pay: To win that fight is bigger than World Cup victory 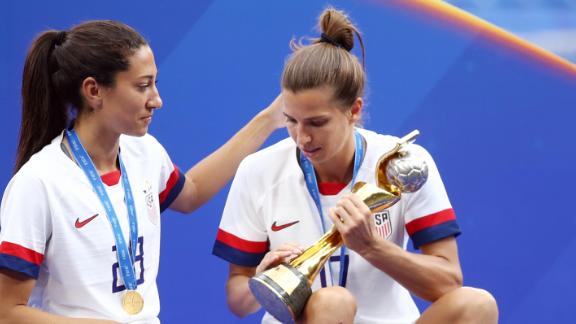 Tobin Heath and Christen Press are mainstays in the US Women's National Team and integral parts to their World Cup title last summer in France. The pair have recently made their debut with the Manchester United Women's team.

When you have the chance to sign two star soccer players from the US Women's National Team, who happen to be winners of the 2019 Women's World Cup in France, the decision would seem to be a no-brainer.

Now the two Americans are making their presence felt both on and off the pitch, as they tackle a new challenge in the FA Women's Super League, joining their compatriots Rose Lavelle, Alex Morgan and Samantha Mewis.

"I think that with the amount of great players that have come to England and with the kind of change of sports culture that's happened with Covid-19, there's a huge opportunity for women's football to be put equally to men's and to be shown on the same channels at the same times and to be given that same respect," two-time World Cup winner Press told CNN Sport's Amanda Davies.

"And I think that's the message that people want to see. People don't want to just root for a team anymore. They want to root for something more."

Off the pitch, both Heath and Press are equally busy. They're are co-founders of re-Inc -- a streetwear fashion brand founded in partnership with fellow USWNT player Megan Rapinoe and former 2015 World Cup winning teammate Meghan Klingenberg.

Press, Heath, and re-Inc also recently teamed up with the American snack company Stacy's as part of an effort to promote female-founded businesses and gain more public visibility for them.

Also very much in the public view is the on-going battle for equal pay, which is a fight neither star is willing to give up on, despite a federal judge dismissing the USWNT players' lawsuit against the US Soccer Federation in May.

"We talk about it all the time. We will get very little personally from winning the lawsuit. But we do it because it will greatly impact the future within the game," Press told CNN Sport. "It will create resources for players, hopefully globally. And it sets a precedent that women in all jobs, in all careers, have a stake."

Press added: "I think that's one of our strengths as a team in fighting this lawsuit, is that we have strong, powerful women all around us, all the time. And our norm is not the world's norm. We're used to seeing women as leaders, as women, as life changers, game changers, world changers. And so that, I think, is our superpower."

READ: As champions for equality, USWNT to be admired in its fight for lasting change

Heath, the two-time World Cup winner, also explained her position, noting: "I think it's bigger than anything we could ever win in football. And the reason I say that is because in football, even by winning a World Cup, you inspire that next generation of girls playing soccer.

"But in this, you can inspire the whole entire world to be treated equally and to be paid equally. And that far outweighs anything I could ever do on the field."

A middle schooler was insecure about his haircut. So his principal fixed it himself instead of disciplining the boy for wearing a hat

Rain and thunderstorms could get pretty hefty later portions of Sunday