Trump's diagnosis puts truth and reality back at center stage 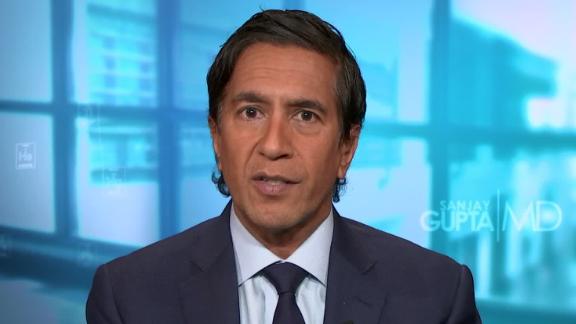 Truth reasserted itself. It has taken center stage back from a man who has spent months during a world-threatening pandemic telling lies that repeatedly put those under his charge in harm's way.

Nothing President Donald Trump says now can distract us from the reality of his diagnosis with Covid-19.

He can elevate a doctor who has claimed alien DNA was used in medical treatments and falsely claims that hydroxychloroquine is a cure for Covid-19; he can purposefully downplay the seriousness of the coronavirus in public; he can suggest Americans should inject disinfectant into their bodies; or claim Democrats and the media have ginned up criticism of his response to the virus just to harm his re-election chances. He can turn away from the graves of the more than 210,000 Americans who have been killed by the virus.

But none of it will work this time. Because this time truth has shown up in unfamiliar terrain -- in the person of Trump himself.

The truth is that usually during a moment like this, with the president infected with a disease that has killed over a million people, the country would want to rally around him. Just months after a contentious 2000 election, the country rushed to support President George W. Bush after the Sept. 11, 2001, terrorist attacks, pushing his approval rating to a record high. That shouldn't happen with Trump because these aren't normal times. They aren't normal times because of the President and his own actions and inactions. And that makes me even angrier about all the lies he's repeatedly told and his intentional flouting of what the world's best doctors and scientists have been saying.

Like I do for everyone who gets infected with Covid-19, I hope Trump comes out of this as physically healthy as he went into it. I'm hoping that after 14 days of quarantine, he'll be stomping around like he was on Tuesday night's debate stage. I wish this illness on no one. I refuse to allow myself to respond in any other way, despite my disdain for his long parade of dangerous falsehoods and actions. Abandoning my integrity, my character just to get in a superficial, short-term dig about Trump, that would be too high a price to pay. He can't have that part of me. He won't have that part of me.

That doesn't mean this development has caused me to feel affection for him. It hasn't. It won't. Trump has been reckless. He has been irresponsible. His behavior has imperiled not just those in his immediate orbit, such as White House staff and aides and a Supreme Court nominee, or the thousands of people he kept inviting to large rallies, some of them indoors.

It has imperiled the stability of the United States of America. It has undermined our global status. It has affected markets. And it has surely convinced many of his supporters to flout health guidelines and scientific findings in ways that have led to harm, and possibly even death.

That's the power of the presidency. That's what he has been treating like a plaything, like a toddler playing with matches. The American public gave him the greatest privilege -- and responsibility -- known to humankind in this country. Instead of respecting the gravity of what he was handed, he not only squandered it, he also weaponized it -- and we are his forever victims.

Now we must wait to get updates from his administration -- which has been one of the most openly dishonest in modern history -- before we'll know the extent of his illness. We know he's in one of the highest-risk categories because of his health status and age. We don't know how the coronavirus will affect him in particular. We don't know if we'll ever really know, because though the truth has reasserted itself in an undeniable way, there's little reason to believe a man like Trump will embrace it even now.

The rest of us must. We have to stand in the breach and do right no matter how many times the President does wrong. Because our lives -- and our character as individuals and as a country -- depend on what we do during a time like this, no matter what Trump does.

I wish the president well, a speedy recovery. But, frankly, he isn't atop my list of concerns. How our country is going to recover from the tenure of a man like this is.