Mitt Romney should take his own advice 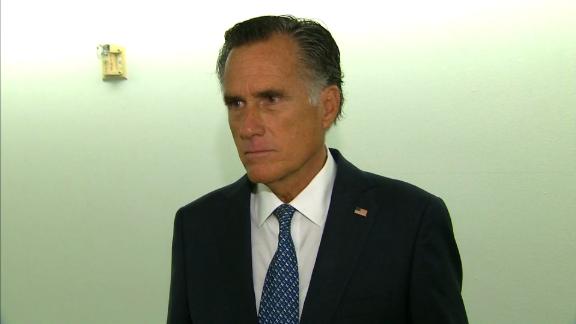 Sen. Mitt Romney (R-UT) signaled in a statement that he's on board with an election year confirmation for a Supreme Court nominee, saying that if a nominee reaches the Senate floor then he will vote "based upon their qualifications."

"Integrity," goes the famous quote attributed to C.S. Lewis, "is what you do when no one is watching." I'll add to it: Integrity is when you do the right thing even if it's against your own self-interest.

This week, Romney said he would support a floor vote to confirm a new Supreme Court justice to replace the late Ruth Bader Ginsburg, just weeks before a presidential election. He did this despite Senate Republicans' avowals that preventing President Barack Obama from filling the seat left vacant after Justice Antonin Scalia's death in 2016 was justified in an election year. Even though the election was many months away when Scalia passed in February, they said the voters should get to decide.

Fast forward to the power-grabbing hypocrisy of 2020 and it's easy to see why Democrats are outraged -- and why all Americans should be as well.

Just two Republicans -- Sens. Susan Collins and Lisa Murkowski -- have said they will honor their previous commitments to not confirm a new Supreme Court justice when an election is looming. And Romney? He has said he is willing to vote. And this is despite McConnell's cynical precedent. If Romney approves of Trump's pick, that person will surely get a seat on the bench. "My liberal friends have over many decades gotten very used to the idea of having a liberal court, but that's not written in the stars," Romney said, adding that it is "appropriate for a nation that is ... center-right to have a court which reflects center-right points of view."

Putting aside the factual errors -- the current Supreme Court is actually much more conservative than liberal, and that there is plenty of evidence that the United States is not a center-right nation -- the question isn't whether it is "appropriate" for the court to lean more left or more right. The question is what a fair, democratic process looks like. What Senate Republicans are pushing isn't fair or democratic; it's seat-stealing. And it's disappointing, if not unsurprising, to see Romney join right in.

In the Trump era of unfettered greed, democratic norm-destruction, ethical destitution, and wannabe-autocracy, Romney has positioned himself as a better sort of Republican. He was the only member of his party to vote to convict the President after Trump's impeachment trial early this year. He compared the President to an autocrat, back then, and in branding himself a man of character and integrity, he quoted a line from a hymn: "Do what is right; let the consequence follow."

He should take his own advice.

Doing what's right is often difficult. Romney is a conservative, and there is no doubt that he wants a conservative justice in Ginsburg's seat. The consequences would of course be vast: Ginsburg's own legacy would likely be undone; reproductive rights, including contraception access, would almost surely be threatened and even walked back, and abortion could wind up outlawed in some states entirely; even progressive electoral victories would be defanged, as a right-wing court could handily undo liberal policies (the Affordable Care Act, hardly the left-wing dream of universal health care, for example, could be on the chopping block).

This is apparently what Romney wants. He's never suggested otherwise.

But he did suggest, in the February vote, that even as he was aligned with the conservative agenda, the means to achieving it were as important as the ends -- that democratic processes were too cherished to be traded away in favor of conservative outcomes. It appears this particular prize is simply too big for Romney to maintain his principles.

Perhaps Romney has put away his hymnal for now. If he's looking for some new inspiration, he might want to revisit what former First Lady Michelle Obama said at the 2012 Democratic National Convention, when Romney was competing against her husband for the presidency.

Through family, she said, "We learned about honesty and integrity -- that the truth matters. That you don't take shortcuts or play by your own set of rules. And success doesn't count unless you earn it fair and square."

Storms and showers stick around through the next several days

Pet of the Week - Natasha

Chelsea's Friday afternoon forecast: A few more showers add to some areas that are already flooded

Chelsea's Friday morning forecast: Rain moves in and sticks around over the next several days