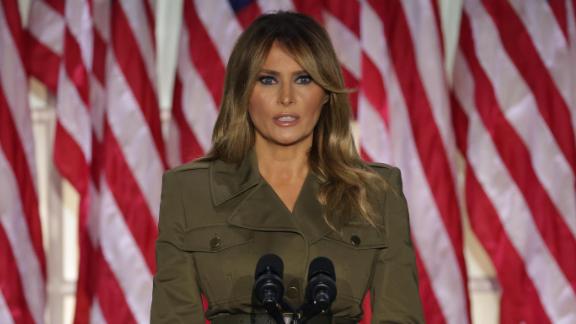 During her 2020 GOP national convention speech, First Lady Melania Trump addressed the suffering many Americans feel during the coronavirus pandemic. CNN's Jake Tapper says that made her unique compared to other speakers at the convention.

Night 2 of the Republican National Convention (RNC) on Tuesday was all about the "Land of Opportunity." A land of hope, and optimism. A land of power and prosperity.

In a continuation of the convention's "flood the zone with President Donald Trump" approach, it was all about making the case that Trump's policies allow Americans to prosper. And it was an opportunity for the RNC to achieve three main goals: toss red meat to the base, throw shade to critics and give permission to swing voters.

The red meat consisted of a central theme: giving a voice to the forgotten man. From Maine to Wisconsin, we heard from a dairy farmer, a lobster fisherman and a metal fabricator. All expressed appreciation for the President's support for the American worker.

Evangelicals at the heart of President Trump's base can also feel good about what they heard Tuesday night. There was an element of redemption with the President's pardon of Jon Ponder, who founded a program for prisoners re-entering society, and we heard the heartwarming story of a police officer who adopted the baby of a homeless, heroin-addicted women.

Most compelling for Trump's faith followers was the story of anti-abortion activist Abby Johnson, who spoke of the horror of seeing "an unborn baby fighting back, desperate to move away from the suction." That imagery will burn in the minds of every pro-lifer who supports this president.

Meanwhile, Kentucky Attorney General Daniel Cameron went right to the heart of critics who accuse President Trump of being racist. He flipped the script on Vice President Joe Biden, who said in May that African Americans who don't know who to support "ain't black."

Cameron, who is an African American Trump supporter, eloquently made the point that not all Black voters are the same, adding, "I am not in chains. My mind is my own. And you can't tell me how to vote because of the color of my skin."

Finally, First Lady Melania Trump gave a warm speech, making the best case for religious and racial unity. She also spoke of the "fragile" state of our country amid Covid-19 and offered sympathy for victims of the pandemic.

And, notably, the first lady addressed the demonstrations we have seen across the country. She urged people to come together in a civil manner and asked that we "stop the violence and looting being done in the name of justice."

In stark contrast to her husband, the first lady showed compassion and empathy. For all the on-the-fence, swing voters who love to hate President Trump's tone and tenor, Melania Trump's address could be the permission many were looking for to support this president. She rounds out his rough edges. With the bare knuckles and back rooms of politics, a softer side is just the welcome mat some voters need.

Hi: 88° Lo: 63°
Feels Like: 85°
More Weather
The humidity ramps up a bit more into Friday morning, and so will the heat. Temperatures will heat up a little more with heat index values climbing even more. There could be an isolated afternoon shower in spots, though most will stay dry. Rain chances increase some into the weekend as a tropical system approaches. But it now appears that many areas may dodge the heaviest rain.