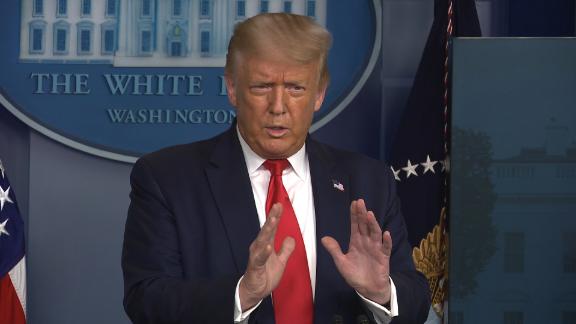 President Donald Trump's aides almost got him to become a serious leader in this age of pandemic. After they showed him evidence that voters in "our states" (Republican ones, that is) were falling ill and dying -- and that this wasn't good for him politically -- Trump resumed pandemic press briefings and even let himself be photographed wearing a face mask.

Alas, the New Trump was not to be. After the mask appearance signaled that he might agree with his top infectious disease expert Dr. Anthony Fauci, Trump retweeted a video in which a controversial doctor says masks don't help prevent the spread of coronavirus and that FDA warnings against hydroxychloroquine -- a drug promoted by President Donald Trump -- are based on fake science. The doctor, Stella Immanuel, has previously made bizarre claims about space aliens, demons, and the danger of Magic 8 Ball toys.

As is his wont, President Trump doubled down in his commitment to spreading Dr. Immanuel's message, telling a press conference Tuesday that, "She was on air, along with many other doctors -- they were big fans of hydroxychloroquine, and I thought she was very impressive." He seemed most impressed by her claim that the same medicines the President himself touted -- an antimalarial drug and an antibiotic -- worked. (For the record, Twitter took down posts related to her claims, citing them as an example of dangerous misinformation.)

As the President's aides no doubt recall, to their exasperation, the President's musing about the antimalaria drug hydroxychloroquine and other imagined cures -- sunlight, household cleaners -- contributed significantly to criticism of his early handling of the pandemic. He pulled back from public engagement with the crisis, but as weeks passed it became obvious that the caseload that now exceeds 4.2 million and a death count approaching 150,000 could be devastating to his re-election prospects.

According to The Washington Post, Trump's recent attempt at taking a new approach on the pandemic happened after his aides showed him data proving that members of his base -- his loyalists in Republican red states -- are now also being hit hard by the coronavirus. They are suffering and dying, just like Democrats in blue states.

In Tulsa, cases surged after the President defied medical advice against public gatherings to hold a rally there in June.

Among those infected, as the President must know, his semi-famous supporter, former Republican presidential candidate Herman Cain, has been in the hospital with Covid-19 for three weeks. While it can't be known for sure where Cain caught the virus, we do know that Cain proudly shared photos of himself at the rally without a mask. The rally was a bust. And Cain is just one person whose suffering recalls an embarrassing night for Trump.

But where someone else's suffering might not be enough to move the President, a trend that makes him look bad may. In this case the political polls made it clear that he risked a humiliating loss if he didn't turn around public opinion on his pandemic response. He also, apparently, started to feel envious of Fauci who, polls show, is more trusted on coronavirus than the President.

Trump's irritation over Fauci's popularity was evident when, after the doctor threw out the first pitch at a Major League ball game, the President surprised his staff by saying he was going to do the same thing at Yankee Stadium next month. (Trump later canceled.) Then, during his Tuesday afternoon coronavirus rating, the President seemed irritated by Fauci's approval ratings. "So it sort of is curious," Trump said, "a man works for us, with us, very closely, Dr. Fauci and Dr. [Deborah] Birx also, very highly thought of -- and yet, they're highly thought of, but nobody likes me?"

Stop for a moment and let this sink in. The President is complaining about the public respect for a public health expert who has offered steady advice to the country in its moment of great anguish. A normal leader would be grateful for a man like Fauci and follow his advice whenever possible. Trump has, instead, made a habit of contradicting his adviser and now, like a child seems envious of him.

It is appalling that while tens of thousands of American dead didn't appear to move him, Trump only donned a mask in public after being briefed on his political peril. Nevertheless, Americans could have prayed that the politics of the latter had forced him to change tack. Better late than never. However, it turns out that the President really isn't capable of changing direction and doing the right thing to save American lives. Left to his own devices, and presumably alone with his Twitter account, he fell right back into irresponsibly touting a bogus drug treatment and pouting about a medical expert who really is a national treasure.

If only Fauci were president.

Hi: 77° Lo: 71°
Feels Like: 78°
More Weather
The heat wave that controlled our area over the past several days is now behind us. The forecast for the next week looks a bit cooler & less humid.