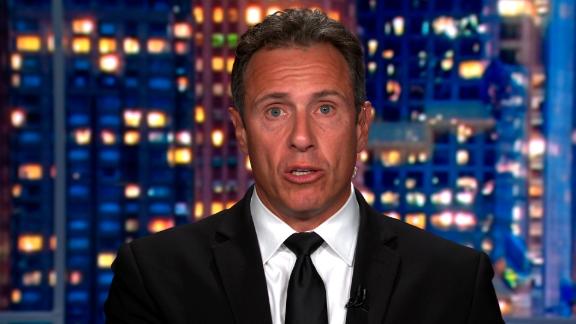 CNN's Chris Cuomo says people cannot solely rely on the Trump administration's leadership to get through the coronavirus pandemic.

With coronavirus casualties at sickening levels, Americans learned on Monday that no one is safe from Covid-19 -- not even the man who's supposed to be keeping Americans safe. News that US National Security Adviser Robert O'Brien has tested positive for the virus presents an immediate health risk within the walls of the White House while serving as a worrisome metaphor for the administration's coronavirus crisis management more generally. If the government couldn't keep a top-ranking official like O'Brien healthy, that doesn't instill confidence it can do the same for us.

O'Brien's Covid-19 diagnosis is a near term health emergency. While others at the White House, including one of Donald Trump's personal valets, have tested positive in the past, O'Brien's exposure is particularly alarming based on the personnel that he should be regularly engaging with, not to mention the close quarters he operates in. The nature of how the White House is structured, alongside the demands of O'Brien's job, mean that critical US government personnel may have been exposed to the virus, including President Donald Trump himself.

Typically, a national security adviser engages with the President, Vice President, Chief of Staff, and other cabinet officials daily, including during the Presidential Daily Briefing (PDB) in the Oval Office, National Security Council meetings in the Situation Room (I've been in my fair share -- the room is usually pretty packed), in-person foreign leader prep calls and more. I can tell you from experience: social distancing isn't an option in a lot of these settings without extraordinary measures.

A national security adviser also typically engages with -- at a minimum -- tens of other mission critical national security personnel each day, including the NSA's direct reports, NSC staffers who come to meet with or brief him, his PDB briefer and many others. Absent physical renovations to the "suite" of offices that the NSA works out of, staff are in incredibly close quarters -- I was less than arms' length away from my suite colleague for the two years I advised a former national security adviser. Needless to say we got very close.

The White House has said that O'Brien has mild symptoms and that the work of the National Security Council "continues uninterrupted." But O'Brien's diagnosis means that a lethal virus could be stalking the halls of the West Wing for some period of time.

To make matters worse, O'Brien didn't limit his interactions. He recently traveled to Europe, with aides and Secret Service agents, where he met with counterparts from Britain, France, Germany and Italy. A photo released by the NSC shows them standing together without masks.

Weighing the exigencies of his job with the need to follow US Centers for Disease Control guidelines is a balancing act, but O'Brien's foreign foray may have inadvertently exposed even more people to the virus both at home and abroad if he was contagious while he traveled. Photos that the White House shared of O'Brien visiting a World War I American cemetery in France also show him without a mask. Nor did he wear one when meeting with journalists in mid-July.

It's true that we don't know exactly when or how O'Brien was infected with the virus. He has reportedly said he believed he contracted it from his daughter, but because his ability to show up to work is so important to our national security it is unfathomable that he (and other senior officials) wouldn't take every safety measure possible to protect themselves and everyone they come into contact with.

The White House should have encouraged personnel to follow CDC guidelines at all times -- both on and off the White House campus. The President and other senior officials may try to blame O'Brien for not being careful on his own time, but they certainly didn't set the right tone about following guidelines regardless of location. Months of not wearing masks and decrying scientific evidence didn't really scream out to staff to take CDC guidelines seriously.

The White House statement said that that there was no risk of exposure to Trump or Vice President Mike Pence from O'Brien -- but someone needs to rethink their communications content. O'Brien has reportedly been working from an off-site location for days other than a brief visit to the White House on Thursday, when he left abruptly. Trump also said he hadn't seen O'Brien recently. But that shouldn't make any American sleep better at night.

While there is no risk of exposure to O'Brien while he is off site, the White House statement sure sounds like the President doesn't spend a lot of time with the man who is supposed to be his most senior adviser on all things national security. O'Brien was last seen with Trump on the President's July 10 trip to CENTCOM headquarters in Florida. Trump and O'Brien's lack of contact could be attributed to O'Brien's travel, but even so the crisis communications here are doing more harm than good.

We know from Trump's Twitter feed that he spends a lot of time watching TV and that he and O'Brien haven't seen each other in a while. This is a public admission that they don't do historically routine things together like hold NSC meetings, prep for foreign calls, get briefed on the PDB and more. For a long time there's been good reason to think that Trump has probably spent more time with his "security" advisers on television than he has with his own NSA, and the White House's comments on O'Brien's infection seems to confirm that.

While we hope for O'Brien's speedy recovery, we must also hope that the Covid-19 outbreak can be contained -- quickly -- because it is a security vulnerability. At an operational level, there is disruption whenever a senior official cannot fully perform their job. The White House has not said O'Brien is working limited hours, but having worked for an NSA for years I know that it is just not possible to fully do your job as efficiently from home even with a secure facility at your house or regular intelligence courier drop offs. That makes the playing field even more uneven vis-a-vis other countries who have a full team on deck.

The White House is trying to portray a message of continuity of operations and stability because they know how bad it looks to have an official at this level operating at less than full capacity. The editor of China's Global Times tweeted on Monday about how this development shows that the virus is out of control. The Global Times is published by the ruling Chinese Communist Party's mouthpiece, the People's Daily, and the tweet should be seen as part of the Chinese CCP's influence operations against the US, but the editor's not wrong about this diagnosis and what it says about how far we have to go in just containing the virus.

More broadly, the fact that the White House couldn't secure its top security adviser sends a terrifying message about the administration's Covid-19 responsiveness -- that it's inadequate at best.

Hi: 78° Lo: 61°
Feels Like: 64°
More Weather
Low pressure off to the west of our area and high pressure to the east over the next few days. In between, in our area the battle will linger some scattered showers and isolated thunderstorms for a few more days.

Scattered showers and thunderstorms in store for our Tuesday