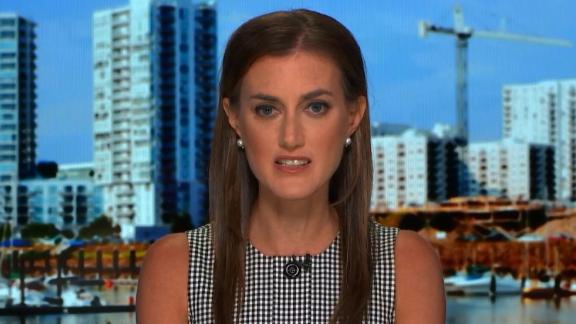 Ahead of Attorney General Bill Barr's testimony before the House Judiciary Committee, CNN national security analyst Samantha Vinograd warns that "we can't trust the attorney general to be honest."

During his nearly 18-month tenure, Attorney General William Barr has done profound and pervasive damage to the Justice Department. He has trampled on the two core virtues that have long defined the Justice Department, through administrations of both political parties: credibility and independence.

Barr has bent the truth, distorted the law and undermined his Department's own prosecutions, with one consistent outcome -- to protect and advance the political interests of President Donald Trump.

Barr has routinely ignored Judiciary Committee Chair Jerry Nadler's largely ineffectual efforts to ensure accountability; at times, Barr has openly defied Nadler's subpoenas, and at others he has casually no-showed when summoned.

Indeed, Tuesday's hearing will mark the first time during his current tenure as attorney general that Barr would testify before the House Judiciary Committee if he appears.

Nadler and the Judiciary Committee have plenty of work to do. Barr's abuse of power has gone largely unchecked, and Tuesday's hearing could mark the last time in his tenure that he faces meaningful questioning in anything other than his own hand-picked forum.

And Barr himself is a one-man target-rich-environment. By his own conduct, Barr has created an indisputable factual record that -- if deployed properly -- could expose publicly the full extent of his abuses.

Here are the five most important questions the House Judiciary Committee must ask Barr.

Voter fraud and the 2020 election. Mr. Barr, you claimed publicly in a June interview with NPR that an election conducted largely by mail would not be secure; that "there's so many occasions for fraud there that cannot be policed"; and that the possibility of counterfeiting ballots was "obvious." On what specific evidence do you base those claims? During your tenure as attorney general, how many cases has the Justice Department charged for voter fraud relating to mail-in ballots? Will you commit not to permit the Justice Department to be used to challenge any 2020 election without specific evidence to indicate that voter fraud actually changed the outcome?

Roger Stone commutation. You testified during your confirmation hearing that, if the President were to issue a pardon in exchange for the recipient's promise not to incriminate him, "that would be a crime." Are you aware that Trump tweeted about Stone's refusal to testify, praising Stone for having "guts"? Do you know that Stone stated publicly, shortly before the commutation of his sentence, that he expected Trump would lift the burden of jail time and that Trump "knows I was under enormous pressure to turn on him. It would have eased my situation considerably. But I didn't." Given these public statements, will the Justice Department investigate the circumstances surrounding Trump's commutation of Stone's sentence?

Replacement of SDNY U.S. Attorney: You announced publicly in June that the U.S. Attorney for the Southern District of New York, Geoffrey Berman, would be stepping down, but Berman announced hours later that he had no such intention. Why did you mislead the public? You later informed Berman in a letter that he had been fired by Trump, but Trump subsequently claimed he was "not involved." Between you and Trump, who told the truth and who lied? Why did you have Berman fired given that you thought enough of his competency to offer him senior positions in the Justice Department and the Securities and Exchange Commission? How was Jay Clayton -- who you initially announced would replace Berman -- qualified to lead the SDNY, when Clayton has never worked a day in his life as a prosecutor? Have you been involved in any way in the SDNY's ongoing investigation of Rudy Giuliani or its prosecutions of Lev Parnas, Ghislaine Maxwell and the Turkish bank Halkbank?

Intervention in Stone and Michael Flynn cases. Can you point to other cases during your tenure where you have recommended dismissal of a case where a defendant already had pled guilty, as you did with Flynn? Can you point to other cases where you have publicly undermined the previously-approved sentencing recommendation of the prosecutors who tried the case, as you did with Stone? When you took those actions, had you seen Trump's tweets and public statements expressing sympathy for both of his former political advisers? In February, you stated publicly that Trump's tweets on ongoing Justice Department prosecutors would make your job as attorney general "impossible" and that "I cannot do my job here at the department with a constant background commentary that undercuts me." Since then, Trump has tweeted repeatedly about ongoing cases. What actions, if any, have you taken in response?

Observers should keep expectations realistic. Barr won't suddenly grow a conscience and cop to his myriad abuses. He is skilled at deflecting, hedging, manipulating the law, or -- as he did when he was under pointed questioning by Senator Kamala Harris -- simply pretending he can't hear or can't understand basic English words.

Nadler and his committee must stand firm. Barr has abused his power and sailed by without consequence for too long. This may be the Judiciary Committee's last shot to achieve meaningful accountability.

Hi: 72° Lo: 55°
Feels Like: 55°
More Weather
High pressure has moved into our area and drier air has moved back into our area. Temperatures for daytime highs will get warmer and warmer over the next several days.