Why have deaths stayed steady while Covid-19 infections are spiking? 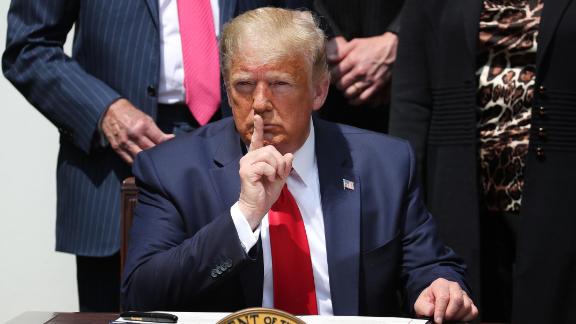 Rep. Donna Shalala (D-FL) tells CNN's Jim Sciutto she's "running out of words" to describe the "lack of leadership" from the White House as the nation reels from the coronavirus pandemic.

Covid-19 cases have recently spiked across the southern half of the United States. Given the reopening of states that exposed more individuals to contagion, this trend is not surprising. What is surprising is that the case fatality rate is so low, at least for now.

The hallmark of the spring Covid-19 debacle was the startling number of deaths in places as far apart as New York, Detroit and New Orleans. Morgues and funeral homes were overwhelmed by the volume; some New York hospitals required refrigerated trucks to store the bodies.

Not now, though. The surge in cases has not been accompanied by a surge in deaths. There are many theories as to why: Given a two-week or longer lag period from infection to death, it may be too soon into the new wave for deaths to have spiked (probably); more young people could be infected this time around and they have a much lower risk of death (definitely); the current patients may have fewer co-morbid conditions than those in March and April (not so sure); initially, because of limited resources, tests were done only in the very sick whereas now we can test broadly, diagnosing thousands of otherwise healthy people at little risk of severe outcome (for sure).

Or maybe medical care has improved (not untrue).

Or perhaps the virus has weakened (not likely).

Recent work -- done not by the federal government but rather by reporters at The New York Times -- has pulled together data that could show a cogent single "reason" for the change: nursing homes.

Using old school shoe-leather information-gathering, the Times journalists identified 54,000 Covid-19 deaths in long-term care facilities among patients and staff (the breakdown between the two groups is not given). This represents a staggering 43% of all Covid-19 deaths in the US, a proportion similar to what was previously reported from France.

Furthermore, the Times constructed a state-by-state table that demonstrates that almost half of these deaths (26,331) occurred in just five states that were part of the devastating March and April wave in the Northern US: New Jersey, New York, Massachusetts, Pennsylvania and Illinois. (Florida sits in 10th place, with 1,748 nursing home deaths).

Which means that a crucial issue affecting mortality is whether the raging epidemic in Southern states will result in the virus further spreading into nursing homes.

Because there is no mandatory reporting of cases by nursing homes, as well as the suggestion that some states have not been forthcoming about their nursing home cases, the only way to estimate what's ahead is to examine cases and rates among persons 65 years old and older. Of course, most of the approximately 50 million people in the US in this age group are not in chronic care facilities, which provide care to about 1.3 million Americans, but most who are in chronic care facilities are in this age group.

Overall, looking at the 65+-year-old group is extremely important when examining Covid-19 mortality: Though they make up only 16% of the US population, more than 80% of the US Covid-19 deaths have occurred in this group.

Fortunately, the Centers for Disease Control and Prevention provides age-specific information on Covid-19 testing by geographic region. Each week, they update COVIDView which includes both a high-level summary as well as a no-frills series of tables. Access to interactive information also is provided.

One caveat: The presented data is a sample, not wall-to-wall surveillance. The data collection sites are strategically selected to provide a representative sample, as CDC does for all disease tracking. With Covid-19, information for about 17 million tests (out of more than 35 million completed in the US as of Thursday) is available while hospitalization data from Covid-Net includes information from over 250 hospitals in 14 states.

The pdf tells the story best. On page 20, a week-by-week summary of testing results for just under 12.4 million tests done by commercial labs is shown, categorized by age. Data from any additional tests do not provide age-specific information and are not included.

The US testing data was recorded starting on March 29 (week 14 or 202014 in the table), when testing finally became easily available in the US and jumps up in early May (week 20, 202020 in table), when commercial tests also became widely available. About 2.2 million tests have been done in persons 65+ years of age, about 649,000 early, when only the sick and dying were tested, and the remaining 1.5 million in the six ensuing weeks.

In this latter interval, testing has slowly increased in the age group to about 300,000 weekly (note that the most recent week's information always lags so numbers currently appear). Nationally there has been a decrease each week in the proportion of seniors who are positive. Most recently, the positive rate is 4.0% in this group versus 7.9% (and rising) for the country overall.

This report then breaks the data into 10 geographic regions. This perspective demonstrates that the decreasing national positive rate in seniors is due to Northern states with profoundly sinking positive test rates; in contrast, the positive rate in the Southern states actually is going up.

The CDC document reports that in the last six weeks, in Region 4 -- with Florida, Alabama, Georgia and five other Southern states -- test positivity among seniors has risen from 3.6% to 5.7%, while the rate in Region 5 (Illinois, Michigan and 4 Northern states) from 5.2% down to 1.9%, each commensurate with the overall regional trend.

In other words, the Southern US is only now seeing a rise in those at highest risk for severe outcomes. Early on, some areas, particularly in Florida (with the 10th most Covid-19 nursing home deaths) experienced devastating nursing home outbreaks of Covid-19 but this did not occur broadly in the Southern US.

Though Southern test positivity rates among seniors are rising, there is one maybe-promising trend: a still-low hospitalization rate. For example, Arizona is currently in the throes of a weekslong surge now over 84,000 cases and has a clear, reliable Covid-19 dashboard.

Alarmingly, the case fatality rate is 13% for persons 65+ years old, similar to that seen in other states and countries. The Times' article identified 541 nursing home deaths in Arizona, accounting for about a third of the state's total.

Protecting nursing home residents is critical to preventing the high case fatality rate seen in the earlier outbreak occurring in Northern states. Unfortunately, as the CDC data shows, more infections are occurring in persons 65 and over in the affected regions -- just as hospitals already are full and health care workers are spent and demoralized.

Though a repeat of the devastation seen in the spring is unlikely, we should again prepare ourselves for scenes of overwhelmed emergency rooms, morgues and funeral homes -- and a federal government that cannot be bothered to develop a meaningful strategy to protect our most vulnerable citizens.

A few clouds overnight but more sunshine by Sunday afternoon

Joel's Friday Morning Forecast: Colder Friday and a bit breezy as clouds increase through the day

Columbus woman grateful to get vaccine appointment before February

Some having difficulties registering for vaccine