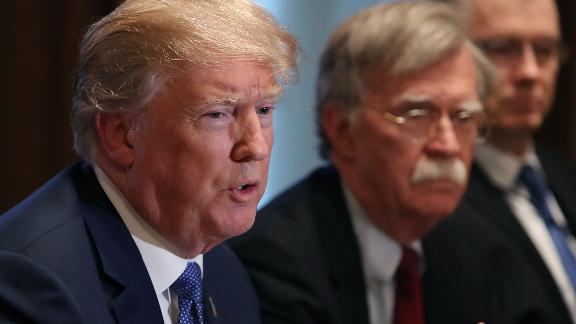 John Bolton has offered the nation a staggering profile in cowardice. He has left no doubt about his own monumental betrayal of his country.

By his own belated admission, Bolton directly witnessed not one but multiple acts that could have been cited in the impeachment of President Donald Trump. But Bolton did nothing about it while he held a powerful post in the Trump administration. And he stayed quiet and took cover when Congress and the nation pleaded with him to speak out during the impeachment process. Yet now that he has entered book promo mode, Bolton suddenly has summoned the spine that he was sorely missing back when it would have made an actual difference.

Bolton had ample opportunity to speak up throughout the monthslong impeachment of Trump over the Ukraine scandal. House investigators first asked that he appear to give voluntary testimony; Bolton was a no-show. Bolton then retained counsel, who requested a subpoena and promised to go to the courts for adjudication.

Investigators decided not to issue a subpoena and spend months bogged down in court. Bolton later claimed he would testify in the Senate, if subpoenaed. But Senate Republicans — quite likely fearful of what Bolton might say — voted not to hear any witnesses at all.

Let's be clear: Throughout the legal and political machinations, Bolton remained entirely free to speak out publicly. But he decided to remain quiet — until now.

And his testimony, it turns out, would have gone right to the heart of the matter. According to the New York Times, Bolton now belatedly reveals in his book that Trump explicitly conditioned foreign aid to Ukraine on investigations of his political opponents. Trump's defenders repeatedly claimed there was no "firsthand evidence" of a quid pro quo. Bolton's testimony would have established just that.

Worse, Bolton now tells the world that he witnessed (and apparently decided to do nothing about) not just one impeachable act, but several. Showing a remarkable lack of self-awareness, he criticizes House investigators for committing "impeachment malpractice" by failing to discover these critical facts. But how, exactly, should investigators have discovered this information when the key witness — Bolton himself — played games and refused to talk?

Even more troubling, Bolton now details Trump's active solicitation of election assistance from Chinese President Xi Jinping. Bolton proclaims that "I saw these developments as a threat to U.S. strategic interests and to our friends and allies."

Bolton now writes that Trump engaged in "a pattern of fundamentally unacceptable behavior that eroded the very legitimacy of the presidency. "

Yet Bolton did nothing and said nothing until now, as he tries to goose his book sales.

Bolton could have changed the course of history. Instead, he will go down in a footnote as an enabler of corruption, a model of cowardice and an opportunist who put self above country.

Wendy's Giant of the Week - Keytravious Shannon of Shannon

Gumtree Museum Of Arts closed for one month during renovations

A Taste of Ireland Raspberry Fennel and Honey Tisane

Interview: Irena McClain of the Diabetes Foundation of Mississippi