'I'm the same as everyone else': How albinism empowered a champion 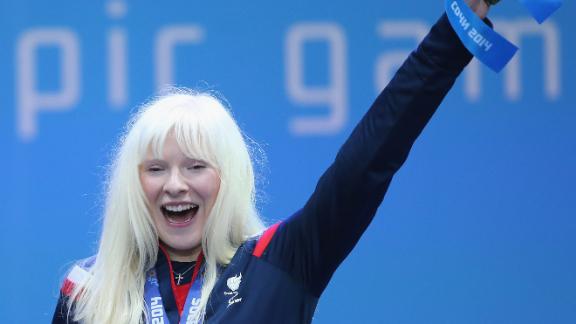 Kelly Gallagher is a Paralympic skier with oculocutaneous albinism - a condition characterized by light hair and skin and visual impairment. But she didn't let that stop her becoming a Paralympic champion.

You're at the top of a steep snow-capped mountain. You squint your eyes tightly -- almost to the point of blindness. Beneath you are two skis and the only way is down -- at a speed of over 80kmph.

Most people would feel fear and foreboding, but for Kelly Gallagher, the feeling is one of freedom.

"When you get a ski to bend and physically feel a jolt of G [gravity] -- it's exceptional."

A daredevil; a history-maker; and Winter Paralympic champion, the 35-year-old from Northern Ireland is no stranger when it comes to defying the odds and gravity.

'I'm the same as everyone else'

"It's like an overexposed picture [...] I find depth perception very difficult. I need a good contrast between colors and shapes to be able to see things," she explains.

Despite being used to hurtling down mountains at breakneck speed, overcoming challenges and channeling frustrations have been part of Gallagher's DNA since birth.

She recalls how at school she would have to sit beside the teacher away from friends to read the whiteboard at a close distance.

At university she felt "anger and annoyance" at a lack of understanding for her needs. And throughout that time flitting between prescription glasses, contact lenses and sunglasses and applying sunscreen daily to combat exposure from the sun.

For Gallagher, though, albinism has also been about empowerment.

Encouraged by her parents and fostered by an inherit steely determination to fend off ignorance, she armed herself with the simple mantra: "I'm the same as everyone else."

In skiing she discovered an unlikely passion and purpose in the unlikeliest marriage of ways and places.

Although as a child she would cycle and roller blade, sport, like snow-capped mountains in her hometown of Bangor, was largely absent.

But a hidden sporting inspiration emerged: A skiing Barbie.

She fondly recalls receiving the toy from her late father and how the plastic figurine -- unlike cycle Cindy -- couldn't bend her legs.

What Barbie lacked in athleticism she made up for in glamor and it was to eventually open up a whole new world.

It was not, though, until an unplanned diversion to Andorra when on holiday with her parents, that a 17-year-old Gallagher would first take to the slopes.

"I found it something that really clicked with me [...] The physicality of being able to move and it being such a wide-open space and everyone going in the same direction I think just captured it."

A need for speed had been ignited. An unlikely dream now a reality. From then there was no looking back.

Gallagher made history by becoming Northern Ireland's first Winter Paralympian at the Vancouver Games in 2010, though the defining moment of her career to date would come at the 2014 Winter Paralympics in Sochi.

In the years between Paralympics, Gallagher had developed an unbreakable partnership with her fully sighted guide, Charlotte Evans -- a former skier herself.

She forensically details how years of constant communication, mutual respect and an understanding of one another's ways and means fostered a new-found belief.

"Sometimes when I was at the airport I used to think quite smugly -- 'I'm a better skier than all these people that are queuing up for this flight [...] I'm able to ski faster than a car!"

Despite their first races being "a disaster," they struck gold in the Super-G category.

It was the first time since the Winter Olympics and Winter Paralympics began that a British skier had achieved such a feat on the slopes.

"It wasn't an exceptional race. I just happened to be the girl that did the fewest mistakes," she humbly suggests.

Her groundbreaking feat initially "didn't really feel unusual for me because I was always trying to do unusual things."

It was only when the she returned home that the magnitude of what had been accomplished began to dawn on her, not least when she was awarded an MBE (Member of the Order of the British Empire).

Honors such as an MBE are awarded biannually, once at New Year's and then again for the Queen's birthday, and recognize excellence in a spectrum of pursuits, ranging from arts and athletics to science and politics.

There was a meeting with Queen Elizabeth II and the President of Ireland -- Michael D. Higgins -- at Windsor Castle and trips to Royal Ascot and Wimbledon followed.

"All of those are tainted now because I'm never going to be able to enjoy a sport event unless I'm in the Royal Box! How am I going to enjoy myself?" she jokes.

'I'd rather be a Serena Williams'

Since the jubilation of 2014, the path has been a bumpy one -- quite literally.

Gallagher teamed up with new guide Gary Smith, a RAF communications technician, in 2016 before suffering a serious injury in a high-speed crash in January 2017.

Returning to the slopes filled her with fear but she was proud to confront her demons and appear at her third Winter Paralympics in Pyeongchang in 2018.

For now, though, Gallagher's pressing engagement is with a recent arrival -- 12-week-old baby daughter Brigid.

"I am convinced she's an angel sent from somewhere else and she has nothing to do with me," she smiles.

"She's like having a really drunk persistent friend that you absolutely adore, but they're a total lunatic!'

Currently on maternity leave from her job as a statistician for the Northern Ireland Civil Service, Gallagher is using the Covid-19 pandemic to carefully formulate her route back to the slopes.

The pandemic has meant the immediate outlook is far from clear, however, the chance to compete at the Winter Paralympics in Beijing in 2022 is something she'd relish.

Her competitive edge and desire to win still burns as bright as ever.

"I like that (my teammates) know that it's possible (to win) because someone's done it before. I would rather be a Serena Williams and be like -- 'No, I'm still winning!' That would be much better!"

Equality of Opportunity for all

Beyond the competitive landscape, Gallagher is acutely aware that challenges still remain aplenty for greater coverage and recognition of disabled persons in sport and society.

"Day to day life didn't change just because we did so well in the Paralympics. We're still working on fighting for that."

"I've been skiing now more than 10 years, and I'm still giving pieces about the actual practicality of skiing, rather than what type of skier I am."

"If we could talk about skiing the same amount as pundits talk about football -- Man it would be good fun!"

She challenges all people to view disability through a different lens and ask ourselves: Is it that we -- disabled people -- are disabled or is it the world that disables us in the social rather than the medical model of disability?

And it's this question, fueled by her lived experience of albinism, that has ignited a renewed drive for equal opportunity.

"I want to see people included no matter whether or not they have albinism."

"When you can have access to education you can stand up for yourself and make those choices for yourself. Having that choice means you can live the life you want for yourself. That's what everyone deserves and needs in their life."

A middle schooler was insecure about his haircut. So his principal fixed it himself instead of disciplining the boy for wearing a hat

Rain and thunderstorms could get pretty hefty later portions of Sunday