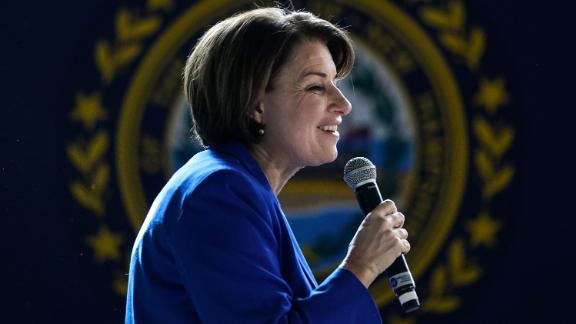 A year ago, I went to a park on the Mississippi, met a bunch of very good dogs, drank hot cocoa, stood by a campfire and watched Sen. Amy Klobuchar announce her run for president. The snow was falling in perfect big fluffy flakes. My inner dad voice kept worrying about all the people -- including the candidate -- who weren't wearing hats. Klobuchar delivered a powerful speech, touting her grit and sensible solutions to America's many problems.

I didn't think she had a real chance, but I acknowledged then and still believe now that she was an extremely effective politician with a track record of impressive victories fueled by persuading moderate Minnesota Republicans to join Democrats in voting for her.

When she declared, I didn't think Democrats wanted a moderate, let alone one with an alleged history of mistreating her staff and troubling allegations about her time as a prosecutor. But if they did want a moderate, Klobuchar was clearly a better bet than the handful of other contenders in that lane.

But on the day before Super Tuesday, she joined fellow moderate and former South Bend Mayor Pete Buttigieg in dropping out of the race and endorsing Joe Biden for president. These seem like moves calculated to stop Bernie Sanders before he can take advantage of a divided field to rack up an insurmountable delegate lead.

They also indicate a tacit acceptance by the two departing candidates that their failures in Nevada and South Carolina showed them unable to win over voters of color. Meanwhile, even as many pundits are arguing we're in a three-man race -- Sanders, Biden and Michael Bloomberg -- Elizabeth Warren might feel differently. I think she should.

I was very surprised by Klobuchar's departure. As a Minnesotan, I certainly thought she'd want to stay and try to win this state (as polls suggested she would), but instead we're seeing center-left Democrats very much in lockstep, trying to organize their slice of the party faithful behind Joe Biden.

Four years ago, Republican candidates like Ted Cruz, Marco Rubio and John Kasich waited until far too late to try and consolidate their support in opposition to Donald Trump. Center-left Democrats are not going to be caught napping this time, it's clear, giving the voters a clear choice of Joe Biden as their standard bearer.

And yet that's the key --- it's still the voters' choice, and the panicked calls from some Sanders supporters for Warren to quickly likewise drop out and back Sanders are premature and insulting. Buttigieg's supporters seem more or less evenly split among the remaining candidates.

It's too soon to tell where Klobuchar's backers will go. Only four states have had the chance to vote, with over 95% of all delegates still up for grabs. Can we not wait 24 hours?

The Klobuchar news made me decide once and for all to vote for Elizabeth Warren in the Minnesota primary. Warren would be the best president of the remaining candidates, and ultimately, if we all just voted for who we think is the best option -- which is what a primary is all about -- we'd be in a better place as a nation.

Can she win? I don't know, but I know that her support remains intense and genuine. Last August, on a day as opposite as could be from Klobuchar's snowy launch, I joined 12,000 people on the lawn of a local college to hear Sen. Warren speak. Afterward, I interviewed the people in the back of a long line of hundreds of people who were waiting for photos with the senator, happy to stay for as many hours as necessary.

Until the candidate changes her mind and decides not to run, those people who waited four hours, even just for a selfie, deserve to be able to cast their ballot for the senator from Massachusetts.

Let's stop playing pundit with our votes and just vote for the candidate we like, count the results, and move forward from there.

Hi: 83° Lo: 73°
Feels Like: 104°
More Weather
Occasional areas of rain and some scattered thunderstorms will be in store for most of the weekend. However, good news by later sections of next week, as cooler and drier air will work its way into our weather forecast.

Man from Lamar County, Ala., died in Friday night accident

The Rain Sticks Around For The Weekend

Maggye's Saturday Evening Forecast: Rain sticks around for the Weekend