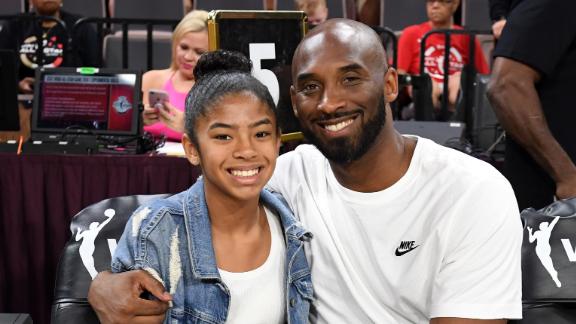 Skateboarding and boxing legends Tony Hawk and Marvelous Marvin Hagler talk to CNN about their thoughts on Kobe Bryant's legacy and life and his daughter Gigi.

Fans packing the sold-out Staples Center to honor the legacy of Kobe Bryant were welcomed to the arena Monday by no less than one of the biggest pop stars on Earth.

Performing with a band and choir clad in all white, Beyonce invited the audience to sing along with her as she belted out her song, "XO," which includes the lyrics, "In the darkest night hour, I'll search through the crowd/Your face is all that I see; I'll give you everything."

"I'm here because I love Kobe," Beyonce told the crowd, "and that was one of his favorite songs."

Late-night host Jimmy Kimmel took the stage and pointed out how the tributes arrived from around the world -- even from Boston, home to the rival Celtics.

"In places where he would be booed on the court, Kobe is missed," he said before introducing Vanessa Bryant.

Bryant's widow first offered a remembrance of her daughter, Gianna, 13, who was one of the eight people on the helicopter with her 41-year-old father when it crashed in Calabasas last month. She recalled how Gianna and Bryant gravitated to each other and shared a "secret talent" of learning the lyrics to songs after hearing them only a few times.

"She was an incredible athlete. She was great at gymnastics, soccer, softball, dance and basketball," the girl's mother said. "Gigi was confident but not in an arrogant way. She loved helping and teaching other people things. At school, she offered the boys' basketball coaches to help give the boys' basketball team some pointers -- like the triangle offense."

Luisa Almeida didn't wear eyeliner to the Staples Center, she told CNN, because she knew it would get ruined once the Bryant memorial got underway in Los Angeles.

Wearing an RIP Kobe scarf and a Lakers jersey she bought in 2001, when she first became a fan, Almeida said she never made it to Los Angeles while Bryant was alive, but she made the trip from Dallas to bid him farewell.

Almeida was one of thousands of fans gathering outside the Staples Center hours before fans packed the 20,000-seat arena, which hosted the Celtics on Sunday.

On Monday morning, South Figueroa Street outside the stadium looked much as it had the night before, with almost every fan wearing a Bryant jersey or some purple-and-gold memorabilia, along with plenty of vendors hawking items for those who did not.

Some fans even decked out their exotic cars -- specifically, a Lamborghini and a BMW I-series -- in Bryant and Lakers imagery.

Shortly after 8 a.m. (11 a.m. ET), fans with tickets to the memorial began filing into the Staples Center where, organizers say, about 35,000 roses will adorn the main stage from which Bryant and daughter Gianna will be memorialized.

Upon entering the arena, fans received a T-shirt featuring the father and daughter on its front, a KB pin and a "celebration of life" program, the back of which featured a Bryant quote dedicated "to our daughters."

Anthony Mercado, 34, and his brother, Edward Mercado, were among the fortunate few to snare tickets. They got up at 5 a.m. and drove from Riverside, about 60 miles east, to pay their respects.

Edward Mercado, 31, was decked in head-to-toe Lakers garb. Even his hair -- purple and yellow, with a green snake on his crown -- was a tribute to hero.

Like Almeida, he didn't believe he'd be able to keep his composure once the commemorations start, he said.

"It's unreal right now, but once I get in there, I know the emotion and tears will come out. ... Right now, I'm just holding it in. It's a blessing to be here. It's part of history going down right now, and I'll talk to my sons about this moment."

The two-and-a-half hour event is slated to finish around 1 p.m. The arena is scheduled to host a Los Angeles Clippers game at 7:30 p.m.

"It's going to be a very emotional celebration of life for Kobe, Gianna and the seven others who lost their lives," Staples Center president Lee Zeidman said. "I think, having done Michael Jackson and having done Nipsey Hussle, this will be one of the most emotional because of what Kobe Bryant, Gianna Bryant, those others meant to Los Angeles, Southern California, but to the world as well."