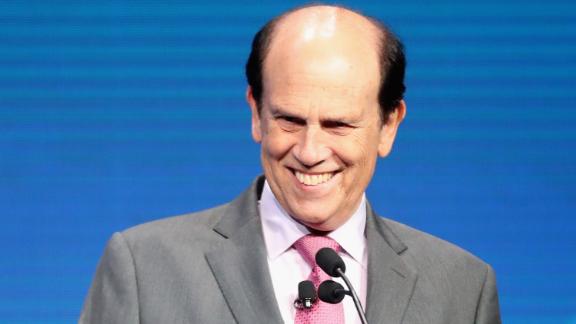 President Trump says he is granting clemency to Michael Milken, the legendary bond king from the 1980s who served several years in prison for violating securities laws and has since become a prominent philanthropist.

President Donald Trump said Tuesday that he was granting clemency to Michael Milken, the legendary bond king from the 1980s who served several years in prison for violating securities laws and has since become a prominent philanthropist.

Trump made the announcement to reporters Tuesday, along with the news that he was commuting the sentence of former Illinois governor Rod Blagojevich and pardoning ex-NYPD commissioner Bernard Kerik.

Milken rose to prominence on Wall Street in the 1980s as the head of the high-yield bond department, also known as junk bonds, at the now defunct firm Drexel Burnham Lambert.

But Milken was accused of taking part in an insider trading scheme and eventually pleaded guilty to several counts of securities violations tied to a scandal with former stock trader Ivan Boesky. He also paid a $600 million fine and was banned from the securities industry.

Milken was sentenced to 10 years in prison in 1990 and served 22 months. Trump adviser Rudy Giuliani, a former United States Attorney for the Southern District of New York, was one of the main prosecutors at that time, although he did not prosecute Milken.

Since his release from prison in 1993, Milken, now 73 and a survivor of prostate cancer, has become a major donor to charities funding cancer research. He also started up the Milken Institute, a leading nonprofit and non-partisan economic research firm that holds a major conference every spring attended by many A-listers in the world of finance.

In comments to reporters Tuesday, Trump said that Milken has "done an incredible job for the world with all his research on cancer" and that "he's suffered greatly. He paid a big price."

Milken said in a statement on his website that his family is "very grateful to the president."

"We look forward to many more years of pursuing our efforts in medical research, education and public health," Milken added.