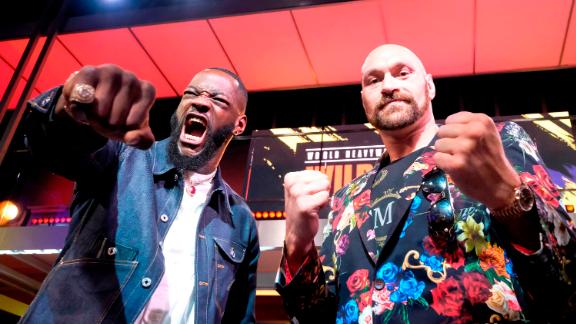 He called it the "biggest fight of the last 50 years in the heavyweight division" and the outspoken Tyson Fury was in confident mood ahead of his rematch with Deontay Wilder.

The pair will lock horns again for the WBC heavyweight title in Las Vegas Saturday following their dramatic draw in Los Angeles in 2018.

Wilder knocked down Fury twice that night and is bidding to break Muhammad Ali's record of 10 straight world heavyweight title defenses, but the colorful Fury promised to "rip (Wilder's) heart out and feed it to him."

"It's Las Vegas. I want to put on a show," the 31-year-old said to reporters Tuesday. "Wilder is not going to beat me.

"His power is not going to hurt me. I want a knockout this time. I'd prefer to go down swinging than outbox him and not get the decision.

"I'm going to make it so that I'm in control and I take it out of anybody's hands. I'll step him up until he can't go anymore, until he is going to quit or he is knocked out."

Since their first bout, which ended in a controversial draw, both men have fought and won twice.

In beating Luis Ortiz in November 2019 Wilder took his record to 42-0-1 and equaled Ali's mark of 10 consecutive defenses of the heavyweight title.

But the undefeated Fury, with a record of 29-0-1, isn't fazed by the dominant American.

"I look at Wilder and I don't see a tough fight," said the boxer, nicknamed the "Gypsy King," talking to reporters at the offices of promoter Top Rank.

With some of his more colorful language omitted, Fury added: "I am going to give him his first loss. That's what I'm going to do to Deontay Wilder."

Although Wilder knocked Fury to the canvas twice in their first bout, the Briton called it "an easy fight" in comparison to some of his others.

Afterwards, he shocked the boxing community by splitting from his trainer Ben Davison and appointing SugarHill Steward as his replacement ahead of the highly anticipated rematch with Wilder.

Davison had been credited with helping Fury journey back from the mental health struggles of earlier in his career but the fighter thought a tactical switch was required if he was to achieve a more favorable result.

"I knew coming back to America that I couldn't come on a whim again and get a fair decision," he said. "Deontay Wilder is the only heavyweight champion America has had in a long time and he is the longest reigning since Muhammad Ali and they don't want to let him go.

"Let's not make any mistakes here, Deontay Wilder has fought 35 stiffs. Honestly, over here in America they call his level of opposition 'tomato cans.'

"If you are fighting and knocking out real opposition that would impress me, but I look at his résumé and he has fought a few former football players, a few has-beens and a load of bums."