'Movement, vibration, dynamism': The helmet-cam that is revolutionizing Formula E 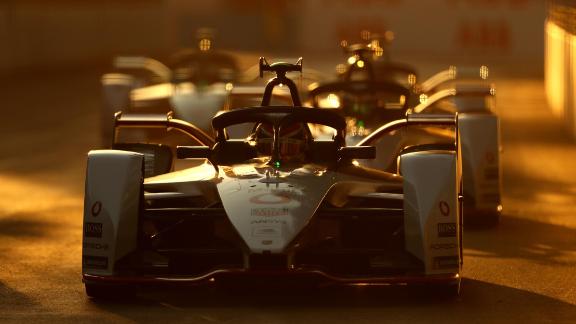 ​Want to know what it feels like to take the wheel of a Formula E race car? Then say hello to Driver's Eye​ - an 8mm camera that gives a unique, through-the-visor view​.

Racing car driver remains just a dream job for many people, but now fans can live the electrifying chaos of the cockpit from the comfort of home.

Formula E has introduced the Driver's Eye camera, an innovation in onboard camera technology which films from the pilot's perspective.

Viewers are immersed in the "dynamism" of the high-speed electric racing series from inside the drivers' helmets as they turn, tilt and bounce around the tight street circuits.

Positioned at eye-level on the protective padding on the inside of the helmet, the camera is eight millimeters in diameter, weighs 2.5 grams and gives fans a real sense of the action from right inside the cockpit.

The "level of immersion" on offer to fans is something that excites Formula E commentator Jack Nicholls.

"What you actually see is much more limiting than with the regular TV angles, but that's the point," Nicholls told CNN.

"Driver's Eye brings back the element of movement, vibration and dynamism of the sport."

Formula E is constantly pioneering innovation in motor sport, from more efficient electric motors to a fan boost feature -- where viewers can vote on social media for which driver receives additional energy during the race.

Its use of Driver's Eye is a first in any category of International Automobile Federation (FIA) sanctioned racing.

Nicholls admits that the camera has been a learning experience for him, too.

"It's how much they move their heads, that has been the big thing for me," he explains.

"It's so busy in the cockpit, especially during wheel to wheel racing, by the time they have checked the information on the steering wheel, looked to the left and right to see where their rivals are, the last place they look is ahead."

READ: 'Your body is the limit to its speed, not the car'

'Closer to the action'

"I think it is cool how Driver's Eye shows fans exactly what I am seeing during a race in real time," said Venturi Racing driver Felipe Massa.

"It gives the viewers insight into the tight and challenging city-center circuits that we race on.

The 2020 Formula E Championship returns with the Marrakesh ePrix on February 29.