Donald Trump and his pardon triangle 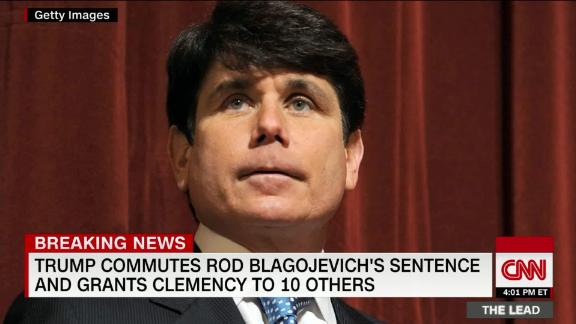 President Donald Trump on Tuesday picked a handful of corrupt former officials and corrupt wealthy influence peddlers and granted them clemency, just days after his administration's latest controversy: accusations that he was tipping the scales of justice in favor of his friend Roger Stone (which he keeps saying he has every right to do, but denies doing).

Who'd he pick? If there's a theme, it's corruption.

Rod Blagojevich, the jailed former Illinois governor, who tried to sell the Senate seat vacated by President-elect Barack Obama back in 2009. (Commuted eight years into a 14-year sentence)

Eddie DeBartolo Jr., the corrupt former owner of the San Francisco 49ers, who was convicted of a felony for his role in a bribery scheme involving Edwin Edwards, the former governor of Louisiana. Edwards went to prison. DeBartolo Jr., lost the 49ers. (Pardoned)

Michael Milken, the king of junk bonds, whose name is synonymous with insider trading, but who spent his time since jail rehabbing his image with donations for cancer research and more. (Pardoned)

It sure seems like the key to getting clemency from Trump is having friends who are close to him. And, barring that, appearing on Fox News -- as Blagojevich's wife did in 2019, expressly asking Trump to pardon her husband.

But that's nothing compared to this. Follow this circle all the way around:

Trump's lawyer, Rudy Giuliani, who is under criminal investigation, asked for Kerik's pardon, according to the White House.

Gallagher, the SEAL who beat those murder and war crimes charges with Trump's help, is mentioned as one of the distinguished individuals who in turn lobbied for Kerik's pardon.

Trump's political benefactors, like Sheldon Adelson and Robert Kraft, asked for the Milken pardon. Kraft also asked for the DeBartolo pardon. We know this because their advocacy was spelled out in the White House statement announcing the actions.

In addition to the pardons and commutations above, Trump also gave clemency to a disgraced former Republican lobbyist, David Safavian.

He also commuted the sentences of three people recommended to him by Alice Johnson, who first came to his attention because he met with Kim Kardashian. Trump's justice is all about relationships, helping friends and punishing foes. Read Chris Cillizza's piece about this.

His friend and political mentor Roger Stone was not pardoned, although he'll be sentenced Thursday.

Other convicts in Trump's orbit

His former national security adviser Michael Flynn and his former campaign manager Paul Manafort have got to be like, "What the heck?!

It's also interesting to note that Trump told reporters at Andrews Air Force Base that he knows the identity of Anonymous, the administration official who wrote an op-ed about staffers undermining him and a book about how he shouldn't be reelected. He did not say who he thinks "Anonymous" is. After he punished impeachment witnesses like Lt. Col. Alexander Vindman and Gordon Sondland, what do you think he'd do to Anonymous?

Questioning caucuses -- I spent the day looking at whether Nevada's Democratic Party will be able to pull off a successful caucus (and whether caucuses should still be a thing).

Open bar on Bloomberg -- This element of an NBC piece about Mike Bloomberg's largesse caught my eye: "At one event at a brewery in Richmond, Virginia, a group of gun rights supporters showed up, telling NBC News they despised Bloomberg but had come for the free beer."

Oregonians out! -- Last week, our Kelly Mena was writing about a plan by conservative Virginians to join West Virginia. Now it's conservative Oregonians who want to join Idaho.

I very much look forward to Bloomberg and Sanders talking socialism.

What are we doing here?

The American system of government has been challenged to deal with a singular President and a divided country that will decide whether he should get another four years in the White House.

Stay tuned to this newsletter as we keep watch over the Trump administration, the 2020 presidential campaign and other issues of critical interest.