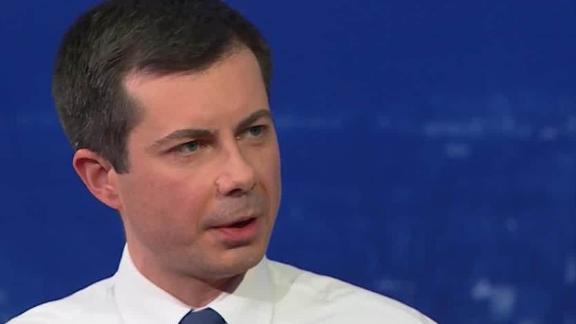 Democratic presidential candidate Pete Buttigieg shared a story at the CNN Town Hall in Nevada about how he tried to use his foreign language skills to help a family caught in the middle of a protest.

Former South Bend, Indiana, Mayor Pete Buttigieg on Tuesday recalled the time he tried to use his foreign language skills to help a family caught up in the middle of a protest.

Buttigieg speaks eight languages -- "some better than others," he said at a CNN town hall -- including Norwegian, Maltese, Arabic, Spanish and Dari.

The day President Donald Trump's 2017 travel ban went into effect, Buttigieg said he went to a protest at a Houston airport. In his first month in office, Trump issued an executive order banning entry for 90 days by citizens from seven Muslim-majority countries: Iraq, Syria, Iran, Libya, Somalia, Sudan and Yemen. The order also indefinitely halted refugees from Syria. Mass protests erupted at airports across the United States in opposition to the ban.

Within a few hours, Buttigieg said there were hundreds of people at the protest.

Buttigieg, who at the time ran unsuccessfully to be the chair of the Democratic National Committee, said he had heard a rumor there was an Iranian family that was not being allowed through because of the ban.

"This family started coming through, and they were being mobbed by TV reporters, and I realized that they may not have had any idea of why there were all these protesters or cameras or anything," Buttigieg said.

Buttigieg went up to the family and tried to communicate with them in Dari, which he likened to Farsi. He said he learned Dari when he was deploying to Afghanistan.

"I see this man emerge, kind of Middle Eastern appearance, his wife is in a hijab, they've got three or four little kids, a bunch of suitcases, they look exhausted," he continued. "And I went up to them and started to ask, you know, are you OK? Do you know what's happening? Do you need any help? Everybody's here to support you."

"And the more I tried to say this in Farsi, the clearer it became that he didn't understand me at all," Buttigieg said. He then realized the man spoke Arabic, which Buttigieg studied in college, so the former mayor tried to communicate with him in that language.

"He had no idea what was going on. He was actually Jordanian, and he just wanted to go home," Buttigieg said.

In the end, actions worked better than words: Buttigieg said he grabbed the luggage cart and helped the family get out of the protest and to the garage, where someone was waiting to pick them up.