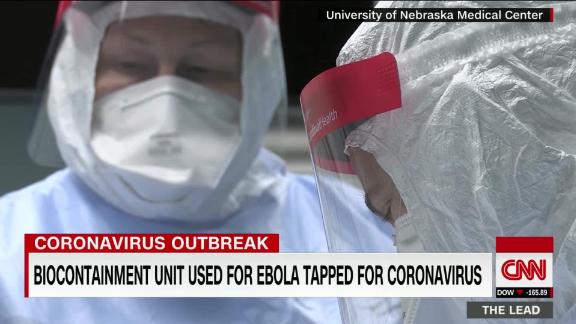 It's why Dr. Mark Rupp, UNMC's division of infectious diseases chief, told CNN Tuesday the hospital is providing patients with chicken soup and antipyretics, or anti-fever medicine like Tylenol or Motrin.

"They're in the chicken soup stage right now," Rupp said. "It's really just watching them and giving them supportive care that you would probably get at home from a loving provider."

The US Office of the Assistant Secretary for Preparedness Response asked UNMC early Monday morning to take in a total of 13 patients who had either tested positive, or had a high likelihood of testing positive, for the novel coronavirus.

The patients had been on a cruise ship docked off the cost of Japan for two weeks. The center said it was prepared.

"We're having them under surveillance in quarantine until we know that they are not a danger to the public," Rupp said, adding that most units have an exercise bike or a treadmill as well as a TV and WiFi so they're able to communicate.

The staff at UNMC is also fully covered in gowns, gloves and a facial indemnifying respirator when they interact with patients.

"We're regarding all these people as likely to be infectious at this point," Rupp said.

UNMC was commissioned by the US Centers for Disease Control and Prevention in 2005 to create the biocontainment unit where one patient currently is. The rest of the patients are in a separate federal quarantine center on the campus, that UNMC built through a private-public partnership.

In 2014, UNMC successfully treated three patients with Ebola, and the medical facility has the capacity to manage other highly infectious diseases like SARS, monkeypox and multidrug-resistant tuberculosis.