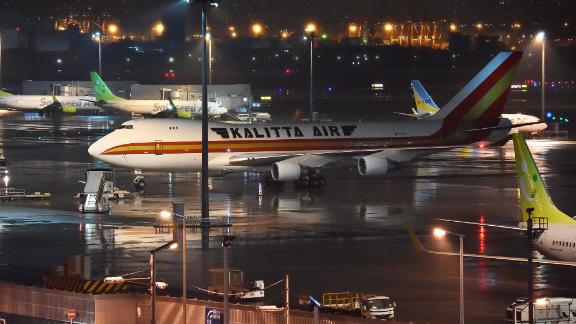 Americans from the Diamond Princess cruise ship in Japan who chose to take part in the US government's voluntary evacuation have arrived at Haneda Airport in Tokyo. CNN's Matt Rivers has more.

Fourteen passengers aboard US chartered flights evacuating Americans and their families from the Diamond Princess cruise ship have tested positive for novel coronavirus, according to a joint statement from the US Departments of State and Health and Human Services.

The passengers are among the more than 300 people removed from the ship, which is docked off the Japanese port city of Yokohama, Sunday night and flown to military bases in the United States.

"After consultation with HHS officials, including experts from the HHS Office of the Assistant Secretary for Preparedness and Response, the State Department made the decision to allow the 14 individuals, who were in isolation, separated from other passengers, and continued to be asymptomatic, to remain on the aircraft to complete the evacuation process," the agencies said.

The passengers who tested positive were isolated from the other passengers during the flights, the statement said. And all passengers are being "closely monitored" throughout the flight.

"Any who become symptomatic will be moved to the specialized containment area, where they will be treated," the statement said.

After the flights land, any passengers that developed symptoms on the flights and those who had already tested positive will be transported to "an appropriate location for continued isolation and care."

The remaining passengers will remain under quarantine for 14 days.

Passengers arriving to Travis Air Force Base will be housed in the same facility as evacuees who arrived from Wuhan earlier this month, a spokesperson for the base told CNN. New evacuees will be kept in a separate area of the Westwind Inn on the base, the spokesperson said.

Before the announcement about the infected flight passengers, some Americans aboard the Diamond Princess said they didn't want to take a chance being evacuated for fear they would be subject to possible infection.

Sacramento resident Matthew Smith told CNN affiliate KOVR that he would rather deal with issues in Japan than be evacuated and quarantined in the United States.

"We decided we would just face whatever consequences here rather than exposing ourselves to that situation," Smith told the affiliate."It kind of didn't make any sense if the us was fearful that these were infected people which is why they're going to quarantine them for another 2 weeks to have thrown them all together"

Smith's wife Katherine Codekas was met with some surprise when she told authorities that she and her husband weren't going to go with the other American evacuees, KOVR reported.

"They came back around again and I said no we're not going and they very sincerely wished us luck but there was a little look of surprise on their face," Codekas explained to the affiliate.

"You know, it's not like we're the last helicopter off the roof top in Ho Chi Mihn City," she told KOVR. "We're on a boat and we're watching people go away and people just make different choices about how they want to confront the virus."