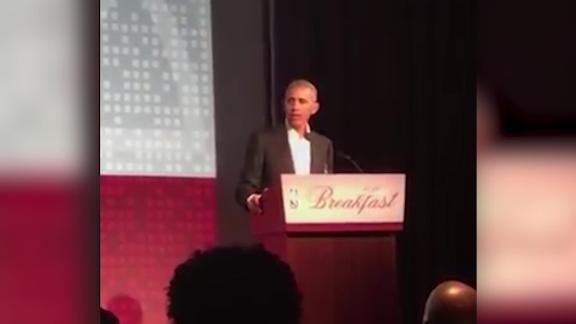 While speaking at the NBA All-Star Weekend, former President Barack Obama says the deaths of Kobe Bryant and his daughter Gianna were especially heartbreaking to him as a parent.

Former President Barack Obama on Saturday offered an emotional tribute to NBA legend Kobe Bryant and his 13-year-old daughter who died in a helicopter crash last month, asserting that "nothing is more heartbreaking" as a parent himself.

Speaking at the NBA All-Star Weekend Newsmaker Brunch, Obama struck a somber tone addressing not only the death of Kobe and Gianna Bryant, but also that of former longtime NBA commissioner David Stern, who died earlier this year of a brain hemorrhage.

"That loss is something I know many are still grappling with. Particularly Kobe, because he was with his daughter and those families and those children and those of us who have had the joy and privilege of being parents and taking kids to ball games and then rooting for our children and seeing our dreams and hopes passed on to them. Nothing is more heartbreaking," Obama said.

"And so I want to offer the NBA family Michelle and my deepest condolences and obviously the families of the Sterns and the Bryants," he added.

The comments echo what Obama tweeted at the time of Bryant's death, calling him a "legend on the court and just getting started in what would have been just as meaningful a second act."

"To lose Gianna is even more heartbreaking to us as parents. Michelle and I send love and prayers to Vanessa and the entire Bryant family on an unthinkable day," the former president said at the time.

Kobe and Gianna Bryant were among nine people killed when their helicopter, headed to a youth basketball game, crashed on a foggy morning January 24.

The father and daughter were buried February 7 at a Southern California cemetery. A memorial service for them will be held February 24 at Los Angele's Staples Center.