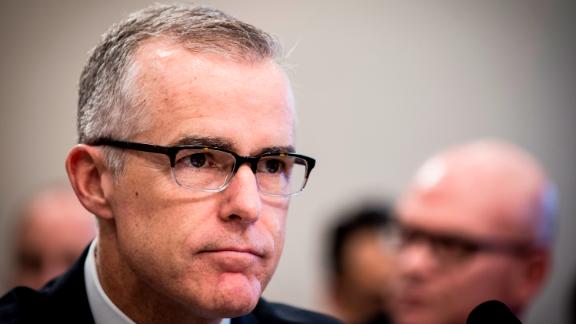 Former Deputy FBI Director Andrew McCabe reacts after the Justice Department announced it was dropping its criminal probe without bringing charges against him. The DOJ was investigating McCabe's involvement in an authorization of a leak to a reporter about the Clinton Foundation investigation.

The Department of Justice is dropping its criminal investigation of former FBI Deputy Director Andrew McCabe without bringing charges, it announced on Friday.

McCabe's attorneys received a phone call and a letter from the US Attorney's Office in DC on Friday announcing the declination.

"We write to inform you that, after careful consideration, the Government has decided not to pursue criminal charges against your client, Andrew G. McCabe, arising from the referral" made by the Inspector General's office to investigate his behavior, the DC US Attorney's Office wrote. McCabe's attorneys released the letter on Friday. "Based on the totality of the circumstances and all of the information known to the Government at this time, we consider the matter closed."

A spokesperson for the Department of Justice declined to comment. A White House official said President Donald Trump was angered federal prosecutors' decision not to pursue charges against McCabe.

"To have this horrific black cloud that's been hanging over me and my family for almost the last two years, to have that finally lifted... it's a relief that I'm not sure I can really explain to you adequately. It's just a very emotional moment for my whole family," McCabe told CNN's Brianna Keilar on Friday.

Despite saying he was happy with the conclusion, McCabe called it an "absolute disgrace" that the DOJ and US attorney's office took two years before they "finally drew the obvious conclusion."

McCabe, who is a CNN contributor, has been perceived by President Donald Trump as one of his foes for his work on the early Russia investigation for the FBI.

The Justice Department previously appeared to be nearing a grand jury indictment of McCabe last fall after top officials rejected a private attempt by McCabe's lawyers to appeal any coming prosecution.

The investigation then fell silent, with McCabe's attorneys trying to get answers for months about its status. Even a federal judge attempted to force the Justice Department to give McCabe and the public an update on the investigation's status. The Justice Department refused to do so, and the judge warned the prosecutors the case was beginning to look like Trump was putting his political influence on it.

Court documents released shortly after the decision became public on Friday shed even more light on how the investigation dragged out for months.

In July 2019, a prosecutor handling the McCabe investigation told a federal judge in a confidential hearing that "there are some minor investigative steps that have been taken recently and are continuing to be taken."

"However, it is fair to say that we are more in a decisional phase than what we would traditionally call an investigative phase," public corruption prosecutor J.P. Cooney of the DC US Attorney's Office said, according to transcripts of hearing and other court records.

Cooney told the judge more than seven months ago that his office was "nearing a decision, but for me to put a date on that is very difficult." He then suggested they'd decide what to do about McCabe by September.

In early September, Cooney was back before the judge, Reggie Walton of the US District Court in DC.

The prosecutor told Walton a public decision on the McCabe investigation and release of information about it were coming "literally within days." By the end of September, Cooney was admitting to the judge his previous timeline was incorrect.

He told Walton it was "an exceedingly difficult matter and situation."

"I don't get it," the judge responded in the closed late September hearing. "I understand there are political implications and other implications involved in reference to whether you go forward."

Walton then zeroed in on the lack of public closure regarding the investigation, comparing Trump's approach to a "banana republic."

"Because the public is listening to what's going on, and I don't think people like the fact that you got somebody at the top basically trying to dictate whether somebody should be prosecuted," the judge said. "I just think it's a banana republic when we go down that road and we have those type of statements being made that are conceivably even if not influencing the ultimate decision, I think there are a lot of people on the outside who perceive that there is undue inappropriate pressure being brought to bear."

The announcement on Friday comes at the end of a bruising week for the Justice Department and especially its prosecutors in DC, after the President publicly pressured them toward his political wishes.

The Justice Department had four prosecutors in its DC US Attorney's Office quit the criminal case against Roger Stone, after departmental leadership forced the office to lessen the sentencing recommendation for Stone, a longtime ally of the President. On Thursday, Attorney General William Barr criticized the President's tweets about ongoing cases while defending his decision to go easier on Stone in advance of his sentencing.

McCabe has found himself a target of investigators and Republicans, including Trump, since 2016, when he authorized a leak to a then-Wall Street Journal reporter about a conversation he had endorsing the investigation of the Clinton Foundation. The Justice Department's independent inspector general, who looked into the incident, found McCabe had lacked candor on four occasions when he spoke to investigators about the leak. The inspector general then referred the matter to the FBI.

McCabe is also suing the Justice Department and FBI after he was fired last spring, and he has accused the President of politically retaliating against him.

This story has been updated with additional developments Friday.