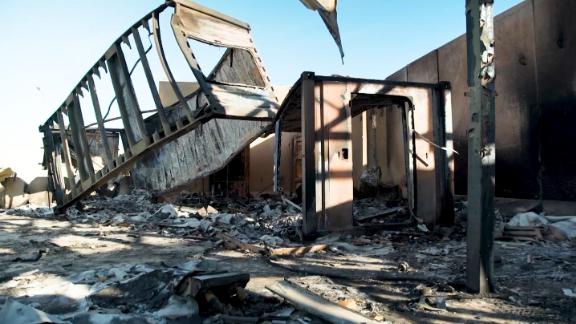 Over 100 US service members have been diagnosed with mild traumatic brain injuries in the wake of the Iranian missile attack on the al Asad military base in Iraq, according to a US official with knowledge of the latest information.

Over 100 US service members have been diagnosed with mild traumatic brain injuries in the wake of the January 8 Iranian missile attack on the al Asad military base in Iraq, according to a US official with knowledge of the latest information.

The statement added that nearly 70% of the injured service members have returned to duty.

"We are grateful to the efforts of our medical professionals who have worked diligently to ensure the appropriate level of care for our service members, which has enabled nearly 70 percent of those diagnosed to return to duty. We must continue to address physical and mental health together," Pentagon press secretary Alyssa Farah said in a statement.

"Our research has been instrumental in the development of various breakthroughs to improve the lives of those individuals who have sustained brain injuries. Our efforts must address the total picture - before, during and after any blast exposure or injury. This is a snapshot in time and numbers can change. We will continue to provide updates as they become available," Farah added.

The Pentagon and President Donald Trump had initially said no service members were injured or killed in the Iranian missile attack, which was retaliation for the January 2 US drone strike that killed a top Iranian general.

Several Pentagon officials told CNN last month that the number of diagnosed cases is likely to continue to change. Approximately 200 people who were in the blast zone at the time of the attack have been screened for symptoms.

During a news conference at the Pentagon late last month, Joint Chiefs Chairman Gen. Mark Milley said the increasing number of reported cases stems in part from the fact that the injuries, for the most part, fall into the category of "mild TBI" which takes time for symptoms to manifest.

"All of those people were screened and we have got a certain number and the number is growing, in this particular case TBI -- that manifests, it takes some time to manifest itself, it's not an immediate thing necessarily -- some cases it is, some cases it's not. So we continue to screen," Milley said. "Some of them have been evacuated to Europe, some have been evacuated back to the United States so there is a layered approach to this, we'll continue to do that with our medical professionals."

Last month, Trump said he does not consider potential brain injuries to be as serious as physical combat wounds, downplaying the severity of the injuries suffered in Iraq.

During the World Economic Forum in Davos, Switzerland, Trump was asked to explain the discrepancy between his previous comments that no US service member was harmed and reports of US troops being treated for injuries suffered in the attack.

"No, I heard that they had headaches, and a couple of other things, but I would say, and I can report, it's not very serious," Trump replied during a news conference.

Asked about the President's comments, Secretary of Defense Mark Esper said Trump "understands the nature of these injuries."

"I've had the chance to speak with the President. He is very concerned about the health and welfare of all of our service members, particularly those who were involved in the operations in Iraq, and he understands the nature of these injuries," he said last month.

An influential veterans group demanded Trump apologize for those comments.

"The VFW expects an apology from the President to our service men and women for his misguided remarks," William "Doc" Schmitz, Veterans of Foreign Wars national commander, said in a statement Friday.

"And, we ask that he and the White House join with us in our efforts to educate Americans of the dangers TBI has on these heroes as they protect our great nation in these trying times. Our warriors require our full support more than ever in this challenging environment," Schmitz added.

How dangerous are TBIs?

The most common form of TBI in the military is mild TBIs, according to the Defense and Veterans Brain Injury Center.

The Centers for Disease Control and Prevention defines a TBI as a "disruption in the normal function of the brain" that's typically caused by a bump, a blow or a jolt to the head. One of the most common forms of TBI is concussion, also known as mild TBI (mTBI).

Away from the military they're typically seen in car accidents, when a person's head hits the windshield. They also frequently occur in sports -- after a football player tackles an opposing player leading with his own helmet, for example.

In 2014 alone, almost 3 million TBI-related emergency room visits, hospitalizations and deaths were reported in the US, according to the CDC. More than 830,000 occurred among children. The total number increased 53% from 2006, the CDC said, indicating brain injuries are on the rise.

They can also be caused by severe shaking, which moves the brain inside the skull and causes injury. That can happen when, using the car accident example, the head jolts from impact but doesn't actually collide with a surface.

These types of injuries can range from mild to severe. Symptoms of mild injuries include headaches, dizziness and confusion.

For moderate to severe brain injuries, though, symptoms can include severe headaches, a lack of coordination, slurred speech and seizures.

Very severe cases can even result in death. There were 56,800 TBI-related deaths in the US in 2014, according to the CDC