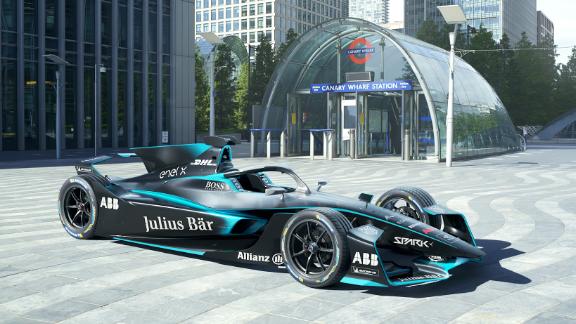 Lithium is the key element for rechargeable batteries used in phones and Formula E cars. But where is it farmed and how? The answer lies in Chile.

Sleek and futuristic Formula E cars zoom through cityscapes across the globe at speeds of over 170 miles per hour, traveling from zero to 60 in just 2.8 seconds.

If electricity is the crucial "E" of Formula E that's because cars on the track are powered by a 200 kilowatt battery provided by McLaren Applied.

Last month the Formula E circus was in South America for the Santiago ePrix -- the city has been the noisy metropolitan home to Chile's Formula E race for three consecutive years. Seven hundred miles north of the capital is the utterly desolate Atacama desert and it's here that you find the source helping power Formula E.

The sun beats down and punishes the landscape here, where the annual rainfall measures barely a few millimeters

This might seem a barren wasteland, but it's also home to one of the most valuable and crucial minerals to modern life: lithium.

It's a substance that's important because it allows the storage of energy in rechargeable batteries, which are used in homes, laptops, electric wheelchairs, solar energy panels -- and electric vehicles.

Chile has a lot of lithium. The South American country has been described as the "Saudi Arabia" of lithium owing to the rich reserves it holds in its salt flats.

American mining company Albemarle pays the local Chilean government to mine the salt flats for lithium. The salt flats under their control could produce enough lithium to build 1.2 million electric cars annually.

High concentrations of lithium are found in a salty brine pumped 30 meters below the surface of the desert floor.

In a series of man-made lakes, the brine is "precipitated" -- a process that involves evaporating water and extracting secondary minerals from the brine over the course of 18 months.

For Albemarle, the initial solution extracted is about 0.2% lithium, but by the end of the process it is 6%.

The company then transports its lithium concentrate to a refinery in Antofagasta, a city 170 miles west of the desert.

From there, impurities are removed, before the concentrate is dried and then milled into a fine white powder.

It's a process not without controversy; the man-made lakes and evaporation of water have put the company under scrutiny.

Since water is critically limited, indigenous people in the region are fearful that the level of water needed to produce lithium -- up to half a million gallons per ton -- may cut into that supply.

In the Salar de Atacama specifically, mining uses 65% of the region's water.

"We do evaporate water in the process, and we've received criticism for that," Ellen Lenny-Pessagno, who manages the Albemarle operation in Chile, told CNN's Supercharged presenter Nicki Shields.

"The water that we evaporate is about 4,000 liters for the equivalent of making a Tesla 3.

"That's about the same as about 250 grams of beef, coffee beans for 30 cups of coffee and about a half a pair of jeans."

While that might the case, water used in the production of those goods doesn't have to be pumped into a desert from elsewhere.

Lenny-Pessagno stressed that despite the impact on the region, lithium batteries can have "very long" lives.

"The beauty of the Tesla 3 electric vehicle battery is that it'll last 10 years and it will have a second life as secondary storage," she said.

"So, a home that has solar panels can store that energy so that at night it still has energy. And then it will actually be recycled."

Research is being undertaken at the University of Chile to extend the life of a lithium battery.

"We talk about life of the battery itself (rather than the life of lithium) which is in the order of 1,000 cycles [charged and discharged] and actually that's part of our research, trying to change the chemistry so that the battery lasts longer," Marcos Orchard, a professor of electrical engineering told CNN.

The effects of this research are already being felt in Formula E. For the first four seasons of the championship, drivers had to change into a different car midway through the race due to a lack of battery power.

Since 2018, and the introduction of the Gen2 race car model, cars can last the whole race.

FIA President Jean Todt has recently reveled in the progress the sport has made already and the impact it will potentially have on society.

"Considering we started with two cars needed to finish a race and now, after five years, we can do it with just one is outstanding because we can demonstrate that motor racing is not only a show but also a laboratory.

Mexico City on February 15 is the next race on the Formula E calendar, and Todt is keen for the sport to continue growing.

"I've always said that Formula E is the category which must have the vision for the future," he said.

"Some people ask if it could be a competitor to Formula One but it's completely different -- it's in a class of its own."