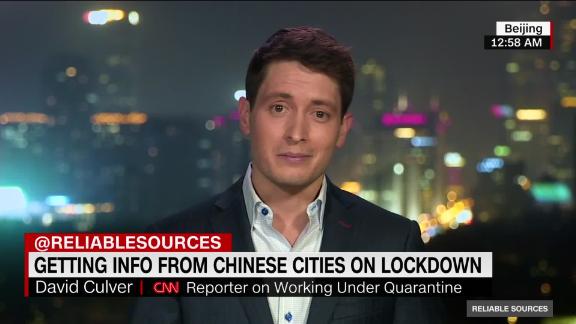 CNN correspondent David Culver tells Brian Stelter about reporting under quarantine in China and making contact with residents who are living in a state of lockdown. "Trust is currency here," he says.

Millions of people across China are heading back to work after the Lunar New Year break turned into an extended quarantine due to the Wuhan coronavirus.

Many will be working from their homes, however, with strict quarantine guidelines in place in many cities and most businesses urging people to work remotely if possible to reduce the chances of transmission.

Some semblance of normality may have returned, but the outbreak shows no signs of slowing, with the number of confirmed cases now at over 40,000 worldwide and the death toll at 910.

That means the coronavirus has officially killed more people than the SARS pandemic of 2003, previously one of the worst medical crises in recent Chinese history.

A total of 3,281 patients infected with the coronavirus have since been discharged from hospital as of Sunday, Chinese health authorities said.

The vast majority of the deaths have been in mainland China, leaving the country in something of a bizarre situation where some areas of it will be returning to something approaching business as usual, even as other regions face increasingly draconian restrictions on their movement and behavior in a desperate attempt to contain the virus.

A team of doctors and researchers from the World Health Organization left for China on Sunday to assist with the outbreak, led by Bruce Aylward, who the organization's Director-General Tedros Adhanom Ghebreyesus described as a "veteran of past public health emergencies." Aylward led the WHO's response to Ebola, as well as initiatives for immunization, communicable diseases control and polio eradication.

Even as the epicenter of the outbreak remains in Hubei, the province of which Wuhan is the capital and accounts for almost 30,000 of the total confirmed cases, the epidemic has spread worldwide, affecting more than two dozen countries.

The largest outbreak outside of mainland China is on board the Diamond Princess cruise ship docked in the Japanese city of Yokohama. On Monday, an additional 65 cases were confirmed aboard, bringing the total number of cases on the ship to 135 -- nearly doubling the previous total of 70 confirmed cases Sunday.

Japan has 160 total cases, including those aboard the cruise ship. Beyond Japan, Singapore has reported 40 cases, Hong Kong has 38 infections and one death, Thailand has confirmed 32 cases, and South Korea 27.

Cruise liners have emerged as a major battleground in the attempt to halt the spread of the virus.

As well as the ship in Yokohama, two vessels in the US and Hong Kong had also been under quarantine, with passengers and crew tested for the virus.

Royal Caribbean's Anthem of the Seas cruise ship, which has been docked in Bayonne, New Jersey, since returning on Friday, will be able to set sail Monday, however, after four passengers who were taken to hospital for further evaluation showed no signs of the virus.

All 3,600 people on board the World Dream ship in Hong Kong will also be able to disembark Monday, after five days under quarantine. Health authorities said that everyone on board had tested negative.

Passengers on board the Princess Cruises liner in Yokohama have not been so lucky. So far at least 135 passengers tested positive for the coronavirus, amid signs of a full blown outbreak on board, one of the largest outside of mainland China. Information from Princess Cruises and a CNN tally put the number of infected Americans on the ship at 24.

Those cruise passengers have been under strict quarantine for over a week now, confined to their cabins as medical personnel conduct tests on the 3,700 people on board.

Princess Cruises said it will offer a full refund to all passengers on board. The company's president, Jan Swartz, thanked passengers for their "perseverance and understanding."

"All monies paid to Princess Cruises including your cruise fare, round trip Princess Air, pre- or post-Cruise Plus hotels, transfers, prepaid shore excursions, gratuities and other items, and taxes, fees and port expenses will be refunded to the original form of payment," Swartz wrote.

Swartz said the company will "refund reasonable independent expenses," along with air travel, transfers or pre/post-cruise hotels. Each guest also will receive a 100% future cruise credit equal to the fare passengers paid for the quarantined voyage, Swartz wrote. That credit has to be applied by February 28, 2021.

"It is our sincere hope that the refund and credit will help ease at least a small bit of the stress you may be feeling right now," Swartz wrote in a letter to passengers.

There was outrage in China on Friday as news emerged of the death of Li Wenliang. A doctor in Wuhan, Li had attempted to warn friends of a new virus spreading, but was detained by police in the city for "rumormongering." He was later hailed as a whistleblower by both the public and state media, but was soon hospitalized with the virus.

Following Li's death, Chinese authorities struggled to control the narrative, especially as the censors appeared to be trying to massage the timing of the announcement, deleting posts announcing his passing. Hundreds of thousands of posted demands for free speech online, in a rare challenge to the authorities, who deleted posts left and right.

History appeared to be repeating itself over the weekend, as it emerged that citizen journalist Chen Qiushi had been missing for several days. Chen, who had been carrying out critical reporting from inside of Wuhan, went missing on Thursday evening, just as hundreds of thousands of people in China began demanding freedom of speech online.

Friends and family later found out from the police that he had been forced into quarantine. By Sunday, Chen's disappearance had started to gain traction on Weibo, China's Twitter-like platform, with many pleading for his release.

"Hope the government can treat Chen Qiushi in a fair and just way," one user wrote on Sunday morning. "We can no longer afford a second Li Wenliang!"

Tight censorship and control of the narrative in the early days of the outbreak has been blamed for aiding the spread of the virus from Wuhan to the rest of the country. Officials in the city downplayed the severity of the virus in public even as evidence was available that it was spreading from person-to-person.

While some Chinese cities will be attempting to get back to normal -- or at least to business, with staff working from home -- others are introducing yet more stringent controls.

In a joint statement Saturday, China's National Health Commission, Supreme Court and Ministry of Public Security announced seven "medical-related crimes" that would be severely punished during the epidemic.

They include attacking medical personnel, refusing medical checks and damaging or destroying property at medical facilities.

According to the statement, anyone who violates new virus control regulations will be quickly prosecuted and could face arrest, jail or even the death penalty.

Many cities and provinces have introduced mandatory self-quarantine policies for anyone returning from elsewhere in the country. Transport in and out of Hubei also remains severely disrupted.

As the virus continues to spread, Wuhan announced Saturday its second rapidly constructed new hospital was ready to welcome patients.

Built from scratch to hold victims of the coronavirus, the Leishenshan hospital can hold up to 1,500 patients and will have 32 wards, Chinese state broadcaster CCTV said.

CCTV said that the first team of medical staff arrived at the hospital on Saturday.

The National Health Commission also announced at a news conference on Saturday that it had chosen a temporary official name for the virus -- Novel Coronavirus Pneumonia, or NCP.

The graphic in this story has been updated to reflect the latest information.