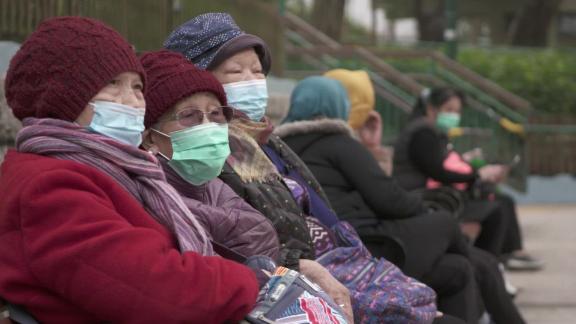 Drastic measures are in place to control the coronavirus outbreak, but what will it take to end it? Will it subdue in five months or grow into a pandemic? CNN's Kristie Lu Stout reports.

Planeloads of Americans fleeing the fast-moving coronavirus outbreak in China are arriving at military bases across the United States this week on what could be the final chartered flights.

The outbreak has infected 28,000 people and killed more than 560 in China, where it started in Wuhan city in December. Outside mainland China, it's raced across continents, infecting more than 250 people in more than 25 countries and territories.

In the US, there are now 12 confirmed cases -- the latest one reported in Wisconsin on Wednesday.

Evacuations of Americans from Wuhan started last month after one flight landed at a base in California with nearly 200 Americans aboard.

On Wednesday, two more flights out of Wuhan arrived in California carrying a total of 350 passengers. Both planes landed at Travis Air Force Base -- between San Francisco and Sacramento -- where they were greeted with sack lunches, drinks, fruit and toys for the children on board.

Of those, 178 passengers from one plane stayed at Travis while the other plane refueled before taking the others to Marine Corps Air Station Miramar in San Diego.

And two more evacuation flights are scheduled to arrive from Wuhan later this week -- one headed to Lackland Air Force Base in San Antonio, Texas, while the other one is going to Eppley Airfield in Omaha, Nebraska.

This week's flights will likely be the last ones. The State Department does not anticipate chartering any planes after this week, an official said.

About 1,000 Americans live in Wuhan, and priority on chartered flights was given to US citizens at a higher risk of contracting coronavirus if they stay in the city, the State Department has said.

The US Centers for Disease Control and Prevention is placing passengers arriving from Wuhan under a 14-day quarantine.

Passengers aboard the first chartered flight on January 29 included diplomats and their families. It landed at the March Air Reserve Base in Southern California, and the passengers are under a 14-day quarantine.

Before the quarantine, everyone aboard the chartered flights is screened for symptoms before departure and is subjected to additional screenings and monitoring aboard the flight and after landing, the State Department said.

The same applies to Americans arriving on regular passenger flights. US citizens returning from China on commercial flights are being rerouted to one of 11 airports that can handle extra health screenings. Those passengers may be subject to quarantine, according to new federal rules that went into effect Sunday.