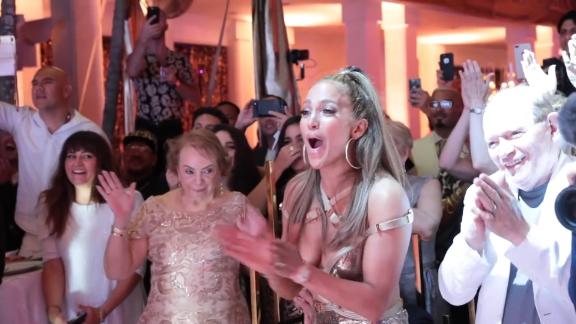 From starring in the critically acclaimed film, "Hustlers," to making waves in the fashion world, Jennifer Lopez had the year of a lifetime.

The Kansas City Chiefs were not the only winners at the Super Bowl, as Shakira and Jennifer Lopez brought Latin rhythms to one of the world's largest stages in their halftime performance. The bilingual show included medleys of their hits, scores of backup dancers, costume changes, a children's choir, and a dual-sided sequined cape featuring the flags of Puerto Rico and the United States. JLo's daughter Emme even performed alongside her mother, singing Bruce Springsteen's "Born In The USA."

Beyond its entertainment value, the Super Bowl halftime show mattered because it put Latino performers center stage, celebrating their contributions to popular culture. It reflected a smart marketing strategy by the NFL and it was a win for diversity and inclusion.

The Super Bowl is one of the few events that Americans gather together to collectively experience. Last year's Super Bowl drew about 98 million viewers, and even at that, it was one of its least-watched games in more than a decade. While the ratings for this year's event are not known yet, it is certainly true that this was the most Latino Super Bowl ever. Demi Lovato, who is partly of Mexican descent, gave a stirring rendition of the national anthem. Los Tigres Del Norte, a Mexican-American norteño band, kicked off the Spanish-language simulcast of the game. Shakira and JLo were joined on stage by Bad Bunny and J Balvin, two popular Latin artists who sang in Spanish.

This kind of visibility is important. Too often, when Latinos are in the national spotlight, it is because of stories about illegal immigration, crime, or tragedies. Consider the last time you saw Latinos featured in the news. Events like the El Paso Wal-Mart massacre, Hurricane Maria in Puerto Rico, and migrant children in cages at the border are probably what come to mind. It is a sad reality that Latinos generally struggle with positive representation in Hollywood, the media, and in politics. So having two Latinas starring in one of the biggest entertainment events of the year is a reminder that Latinos are a significant force in American culture.

In fact, JLo and Shakira made history on Sunday night. While other Latino artists like Christina Aguilera, Gloria Estefan, and Arturo Sandoval have performed in Super Bowl halftime shows, this was the first time that two Latinas were the headliners.

This year's show was also a good business move for the NFL. According to the league, just 9% of the average TV audience this season was Latino, while the Institute for Diversity and Ethics in Sport reports that fewer than 1% of NFL players are Latino or of Latino descent. With Latinos making up 18% of the US population, the NFL has work to do in recruiting Latino fans and players. Throwing an entertainment extravaganza in Miami, the unofficial US capital of Latin America, is a solid start.

Sure, some analysts and political junkies will be talking about the new Trump campaign ad that ran during the Super Bowl. But most people tune into the big game to escape the usual pressures and routines of everyday life. They want a great game and a great show -- and on the latter, JLo and Shakira delivered with their talent and charisma. Latinos can feel proud knowing that viewers will likely remember the exuberant halftime fiesta far more than any political commercial.

The 2020 Super Bowl halftime show was a showcase for Shakira and JLo -- and their roots. Their unapologetically diverse celebration showed that Latino culture is every bit as American as the Super Bowl.