Laurent Duvernay-Tardif: The first medical doctor playing in the NFL is in Super Bowl LIV 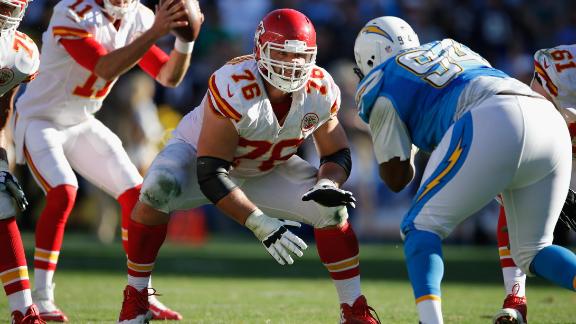 This doctor has one of the most important jobs in Super Bowl LIV, but he's not part of the team's medical staff. Laurent Duvernay-Tardif plays right guard on the Kansas City Chiefs offensive line.

This doctor has one of the most important jobs in Super Bowl LIV, but he's not part of the team's medical staff.

Instead, Laurent Duvernay-Tardif, who earned his doctor of medicine degree from McGill University in Canada in 2018, plays right guard on the Kansas City Chiefs offensive line. He is tasked with protecting superstar quarterback Patrick Mahomes as well as trying to deliver the Chiefs their first Super Bowl win in 50 years.

"When I stepped on that stage at McGill University and got my MD last year, it was probably the best moment of my life -- after the one I'm going to live (Sunday)," a laughing Duvernay-Tardif, alluding to Sunday's Super Bowl LIV, said to CNN on Monday.

Duvernay-Tardif, 28, stands at 6 feet, 5 inches and is listed at 321 pounds. When he speaks English, the Montreal native's French accent is evident while also giving a warm smile.

"I think I want people to see me as one of the best student athletes in the world," said Duvernay-Tardif, in his sixth NFL season and in the midst of a five-year, $42.4 million contract. "Of course you want to be the best football player. You want to be the best doctor. But to be able to combine both at the highest level ... I think that's my biggest accomplishment."

Sometimes his teammates may occasionally call him doc or doctor, but they also call him Larry, and it's evident his intellect transfers to the gridiron.

"Without a doubt, especially with the offensive line position," Chiefs tight end Travis Kelce said Tuesday. "You have to be a very smart dude. There's a lot of stuff that goes into protections, and how we're going to identify the run game. Larry's stepped in. He figured it out early in his career, and he has just taken it for a ride ever since."

Said Chiefs offensive tackle Eric Fisher on Tuesday: "He's a doctor. He's a football player. I think he's got two passions in life, and he's a professional in both of them. How many of us can say that? Usually everyone's just a professional with one thing. He's a professional with two. Pretty crazy things that not many people can do. What he's accomplished up to this point in life is pretty amazing."

Duvernay-Tardif was no lock to reach the NFL -- and he had a bit of a scare getting into medical school as well.

Because he had entered the incorrect date on his calendar, Duvernay-Tardif, whose first language is French, missed the deadline to get into French-speaking medical schools in Quebec. At McGill, one of three English-language universities in Quebec, he didn't initially join the football team until later during his freshman season, as he worked on his English to keep up in class.

Meanwhile, Duvernay-Tardif wasn't playing for a typical powerhouse program that produces NFL players. Previously, just one other player had been selected in the NFL draft from McGill -- defensive tackle Randy Chevrier, who was drafted in the seventh round by the Jacksonville Jaguars in 2001.

As Chiefs general manager Brett Veach once alluded on February 7, 2019, "When Tardif came out, he had some tape from McGill that wasn't Alabama or Auburn. It was Canadian tape and looked like Division II or III football."

"You have to understand where he came from," Reid said. "McGill University is a great university. However, the football maybe might not be the same level that you see at the college level in the States here.

"There was quite a gap that he had to climb there to be an NFL player, and he attacked that, probably just like he did becoming a doctor with the tough classes that he had to take.

"But that's the way he's gone about it. He's worked his tail off. He's strong. He's smart. He loves to play the game."

Duvernay-Tardif was in his third year of medical school when the Chiefs drafted him in the sixth round in 2014. There was also a Chiefs tie to Duvernay-Tardif's alma mater: Reid's mother graduated with a medical degree from McGill.

With his head coach's blessing, Duvernay-Tardif continued his studies, returning to Montreal during offseasons to fulfill his clinical rotations in pediatrics, obstetrics, geriatrics and his preferred specialization, emergency medicine.

"I was confident in my ability to play in the NFL for sure," Duvernay-Tardif said. "You look at the stats, and how long is an average career and all that stuff, with studying medicine I didn't know what was going to happen, but everything turned out great. I think Coach Reid is a big part of that, too. He understood what I was trying to do with my study. He gave me the chance to balance both. If it was not for him I would have (just) got my MD and I would not be here this week for sure."

To prepare for his final exams, Duvernay-Tardif isolated himself in an apartment outside of Montreal and studied up to 14 hours a day. And on May 29, 2018, he earned his medical doctorate after an eight-year journey, wearing a white lab coat after the ceremony with his uniform number 76 stitched on the back.

"It was a grind," Duvernay-Tardif said to CNN. "It was a lot of sacrifice, but at the end of the day it was worth it."

After that, he was right back with the Chiefs for training camp. Now, more work lies ahead this week in Miami.

"I don't get any feeling that he's ready to become a doctor right now and go that direction," Reid said. "I look for more years with him and continued growth."

Residency on hold for now

Residency indeed does remain on hold for Duvernay-Tardif, and it's hard to say when it will begin.

"Because I want to do emergency medicine, and they only take anywhere between five and six students at McGill per year, it would put too much stress on the rest of the cohort," Duvernay-Tardif told CNN, adding that he is in contact with the faculty of medicine at McGill.

"We'll find a way," he continued, "but I think this year I wanted to focus more on football."

But, he says, "The good news is that I didn't do an undergrad before getting into medical school. So I'm still really young. I'm 28. A lot of people are not done with their residency, or haven't even started their residency, when they were 28. I still have plenty of time. The most important thing is to stay up to speed with the knowledge, for sure."