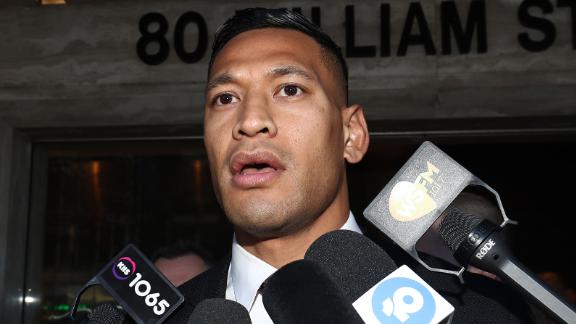 Israel Folau has signed a one-year contract with Super League side Catalans Dragons despite being disgraced for an anti-gay post on social media.

Israel Folau, who was embroiled in a lengthy dispute with Rugby Australia over an anti-gay post on social media, has signed a one-year contract with Super League side Catalans Dragons.

A devout Christian, Folau reached a settlement with Rugby Australia last year after being sacked for an Instagram post in which he said "hell awaits" gay people.

The 30-year-old also suggested that the recent Australia's bushfires and droughts are punishments from God for the country's same-sex and abortion laws.

Folau made 73 appearances for Australia's rugby union side but has now switched back to Rugby League, the code which kickstarted his professional career.

"I acknowledge the views expressed by Super League and the Rugby Football League," Folau said as his new club announced his signing.

"I'm a proud Christian, my beliefs are personal, my intention is not to hurt anyone and I will not be making further public comment about them.

"I look forward to my return to the great game of Rugby League with the Catalans Dragons."

The Rugby Football League -- the sport's governing body -- said allowing the signing had been a "difficult decision" and deplored the player's previous comments.

"However the moral responsibility for deciding whether to sign a player sits with individual clubs," a league statement read.

"The player has not been charged or found guilty of any criminal offense.

"However distasteful his previous comments, we don't believe that, under our current regulatory framework, these can prevent his participation in the sport."

Catalans Dragons Chairman Bernard Guasch said he wanted to give Folau a new opportunity and that the club, which is based in the French city of Perpignan, does not share or condone his expressed beliefs.

"I have sought the opinion of informed voices connected to our game, and the majority share my disappointment that one of our clubs has chosen to sign him," he said.

"There is a strong feeling that the decision to sign him lets down many people connected to our sport. I made Catalans Dragons aware of those views."

Following news of Folau's signing, fellow Super League club Wigan Warriors announced its next match against the Catalans Dragons on March 22 will now be Pride Day, with players wearing Rainbow socks and laces.

"Our community foundation have a long history of supporting local LGBTQ+ groups and initiatives, and we want everyone who engages with our game to feel welcome, valued and most of all, respected."

Keegan Hirst, who plays for Rugby League side Wakefield Trinity, said he was "shocked and disappointed" about the decision in a tweet about Folau.

"Our great game is tasked with fighting against homophobia and standing up for the values it puts such high stock in," he wrote.

"It shows none of the bravery, camaraderie or integrity @rfl [the league] expects from its players, staff and fans."